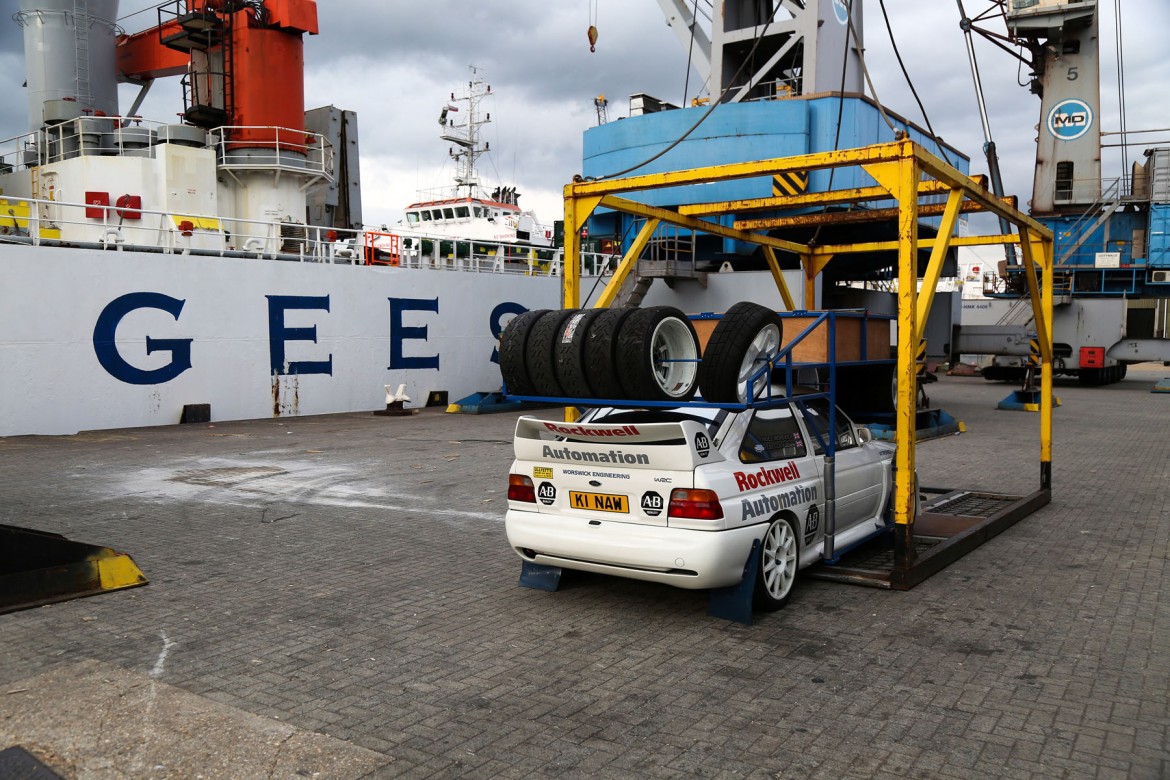 Having off-loaded fruit and other exports from around the Caribbean, the Geest Line freighter Benguela Stream set sail from Portsmouth in England on Tuesday (April 25) carrying a shipment of 31 rally cars from the UK, Ireland and mainland Europe bound for Sol Rally Barbados 2017.

After a 10-day trans-Atlantic voyage, the ship will off-load its precious cargo at the Bridgetown Port . . . including a 45-year-old ex-works Ford Escort MkI, which has undergone a bare-shell rebuild for a nostalgic trip to Barbados.

In the year that the Barbados Rally Club (BRC) marks its 60th Anniversary, the Club’s premier event will run from Friday to Sunday, June 2-4, and Flow King of the Hill the previous Sunday (May 28). Even with today’s (Thursday) 6.00pm deadline close at hand, new entries have been posted on the official web site in the past few hours.

Among the cars in today’s shipment, which bring the confirmed overseas entries to 41, is Gerald Pennell’s Callaway Golf, Ellis & Son Builders and GP Engineering-backed Escort, bearing the registration number REV 101K. Built at Ford’s competition base at Boreham, it was a practice and recce car for 119K, 120K and 128K, which the factory entered in period for Roger Clark and Hannu Mikkola among others, with 120K also well-known for post-works wins in the hands of Adrian Boyd and David Stokes.

Pennell bought the car in 1977 and campaigned it with considerable success until, like many other MkIs, it was re-shelled as a MkII in 1981; Pennell continued to rack up top 10 finishes and class wins until 2012, when he decided to rebuild the car in its original works spec, targeting an entry on Sol RB16, along with friend and competitor, Maurice May, who intended to celebrate his 70th birthday with an entry. Sadly, Maurice died before he could make the trip, son Simon and other members of Farnborough District Motor Club competing last year to honour his father.

This year, Pennell is campaigning as ‘Team Geriatric’, to remember not only Maurice, but also other fallen rallying friends, Keith Aslett, Stan Dukes and Ricky Wall, all of whose names are on the car. There is a brighter side to the trip, too, as Sam Ogier, who has been helping Pennell with the logistics, will be marrying his fiancée Kerry at Coconut Court Beach Hotel while they are here. Cars awaiting to board the boat to Barbados – Andy Crayford Photography

The second MkI is familiar to local fans, friend and former sponsor of Martin Stockdale, Ray Clough back for a third year with his Weber Construction Materials, Frank Key Builders Merchants and CCF Builders Merchants-supported example. Clough returned to rallying two years ago, saying at the time: “I’m 60 this year, so I thought I would treat myself, get the car out of the garage and use it for what it’s built for.”

Having first competed in the late 1970s, he had taken a long break and the Escort was finished in 2007, but not used until two years ago. On his first trip, he finished 42nd and fourth in the International Historic class, improving to 27th and Historic 2 class-winner last year, both times with local co-driver Stephen Bell. As Bell is now sitting with Pennell, Kareem Gaskin will be in the ‘hot seat’.

Pete Rayner, whose tail-out driving style has had the crowds jumping for the past two years, is back with his Perry Road Autos Escort MkII, missing KotH while on a family holiday, which also means daughter Maria hands over the co-driver’s seat to Ashley Trimble. He and Rayner were sixth overall and class-winners on the Jersey Rally in 2015, while he also co-drove for Philip Hopkins (Mitsubishi Lancer Evo VI) in Sol RB15.

Maria contributed to a Special Stage Extra programme, which increased Sol RB15 air time on British television, and the Rayner family are again responsible for extra UK exposure this year, with a five-page feature in the May 2017 edition of ClassicFord magazine. In a sidebar panel on his Sol RB outings, Rayner said: “It is an incredible event, brilliantly organised by the Barbados Rally Club, with massively knowledgeable and friendly locals in huge numbers competing and spectating. The whole package isn’t so much more expensive that doing an event like Jersey . . . and the weather is usually a lot warmer than the Channel Islands in Otober.”

Rayner’s friend Steve Finch is also back for a third visit in another MkII, with two overall finishes already under his belt, second in SM10 in Sol RB15 the better of his two results; he returns with Stan Graham as co-driver for the second time. Some of the helpers including – Organiser Martin Stockdale (second right), Nigel Worswick (left of car) and Andrew and Melissa Costin-Hurley (first and second left)

As happens every year, a group of Sol RB regulars travelled to Portsmouth to assist with loading the cars on Monday, led by Martin Stockdale, who marks his 17th consecutive visit at Sol RB17. Newcomers to the dockside crew this year, Kevin Procter and Nigel Worswick, drove round trips of 550 and 600 miles respectively, to combine delivering their cars and helping with the loading process.

Rally Office Manager Jeanne Crawford said: “What these guys do every year is such a big help to us, as rally cars are precious cargo and everyone worries for the safety of their cars. So thanks to Martin, Kevin, KP’s friend Les, Nigel, Paul Rees, Ray and Carron, the Costin-Hurleys and the Maugers for all their hard work on Monday evening. Their working relationship with the men on the dock plays a huge part in building confidence in our event, particularly among our newcomers.”

Sol Rally Barbados (June 2-4, 2017) and Flow King of the Hill (May 28) are organised by the Barbados Rally Club, which celebrates its 60th Anniversary in 2017; Sol RB17 marks the 10th year of title sponsorship by the Sol Group, the Caribbean’s largest independent oil company, and the second by communications provider Flow.