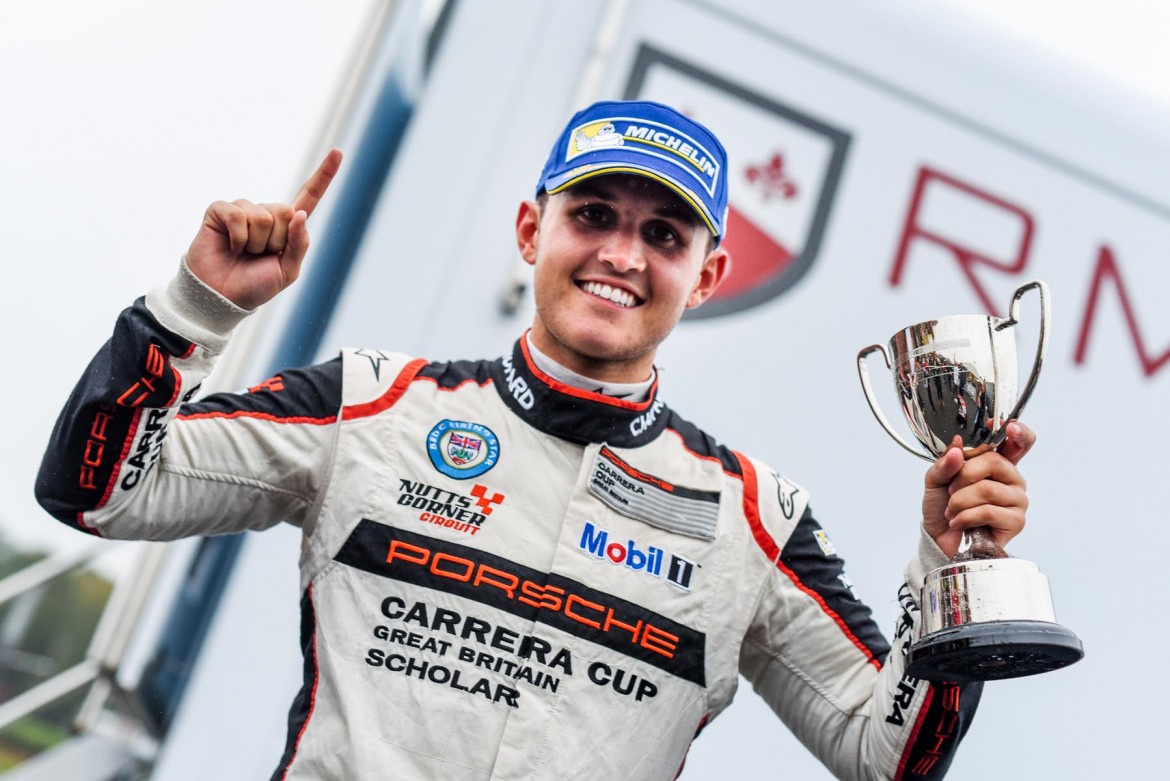 The 2017 Porsche Carrera Cup GB championship was settled in spectacular style at one of the most spectacular circuits on the UK calendar, Brands Hatch Grand Prix and Northern Ireland does the double with two drivers bringing home respective championship honours.

With the Porsche 919 Hybrid, the pinnacle of the Porsche Motorsport pyramid, leading the cars to the grid for both of Sunday’s races, the championship battle between Porsche GB 2016 / 2017 Scholar – Charlie Eastwood from Northern Ireland and England’s Dino Zamparelli was settled in Eastwood’s favour in the final few laps of the final race.

The pair tied on points, but not before reigning champion Dan Cammish (Redline Racing) signed off the season in style with another dominant weekend – double pole positions, two fastest laps and a pair of wins a fitting way to end an era that has seen Cammish take 31 victories over just three seasons.

Another Northern Ireland driver, Shamus Jennings (G-Cat Racing) sealed the Pro-AM2 championship with a measured pair of second-place finishes, the record-breaking Peter Kyle-Henney (IN2 Racing) unable to do any more than win both races and reduce the gap to just one point. Shamus Jennings had a hard fought race and with Peter Kyle-Henney being a fierce championship rival all year, victory on this race moved him within two points of Jennings heading into the final round.

All eyes were glued to ITV4 at this point to witness what could a Northern Ireland duo – sharing the top of the championship rostrum, in their respective classes with Eastwood taking overall championship honours – however there was a full grid of drivers eager to strip these men of any chance at title hopes.

Welcome to the nail-biting round fifteen, a dry track and with the ever-present threat of rain in the air saw the field once again led out onto the grid behind the Porsche 919 Hybrid.

The climactic final round would see either Charlie Eastwood (Redline Racing) or Dino Zamparelli (JTR) crowned as champion, and they lined up for the standing start third and second respectively. An even start from the front two rows allowed Zamparelli to move to the inside and slot in between Dan Cammish (Redline Racing) ahead and Eastwood behind. Lewis Plato (JTR) went wide to pass Tio Ellinas (JTR) and carried his momentum around the outside of Paddock and up into Druids. Contact between Plato and Eastwood ahead, who had also taken to the outside of Druids, was just enough to allow Ellinas, Plato and Tom Oliphant (Redline Racing) past.

One corner began what was to be a thrilling points battle between Eastwood in sixth and Zamparelli in second.

Were Zamparelli to finish second, Eastwood needed to cross the line fifth or higher to equal the Bristol driver on points but take the title on number of wins – four to three. Standing between Eastwood and the 2017 title was team mate Oliphant, who was determined not to make life easy for the Belfast driver. As Zamparelli held the gap to Cammish at just under one second, the pair posting almost identical lap times, and Ellinas settled into third, the pressure was on Eastwood.

By lap five he was in a position to put Oliphant under an increasing amount of pressure of his own, Oliphant in turn responding to close in on Plato. As the trio became a train fighting for fourth, Eastwood made his move. Eastwood on his way to overall championship victory on Sunday

On lap 10 he ran to the inside of Oliphant at Hawthorns, unable to do more than draw alongside, but remaining there through Westfields while Oliphant doggedly held on around the outside. The two approached Sheene still side by side, but Eastwood was able to finally move ahead as the pair turned into the right-hander.

A move into fifth gave Eastwood the position he needed to win the title, but as Plato ahead began to drop back, the small advantage Eastwood had built over Oliphant was eroded.

As the three ran nose to tail into Sheene on lap 14, Oliphant took to the outside once again and Eastwood, now blocked in, could do no more than watch Oliphant retake the position and the championship advantage once again swing towards Zamparelli.

Choosing to respond immediately, as the pair ran towards Paddock Hill Eastwood swept past Oliphant on the brakes and back into the lead of the championship.

With only two laps remaining, lapped traffic added one more factor into the equation. As Cammish expertly picked his way through, Zamparelli took every opportunity to erode the two second gap and close on the leader.

However, it was not to be for Zamparelli and it was Charlie Eastwood who would be crowned champion! Over to Pro-AM2 and in order to topple Shamus Jennings (G-Cat Racing) at the top of the table, Kyle-Henney needed one other driver between himself and Jennings, were he to take the victory.

This he duly did – setting an overall record of 20 Pro-AM2 wins on the way – but Co. Down’s gentleman racer, Shamus Jennings, was able to fend off his challengers to take the 2017 Pro-AM2 title. Jennings, Fairbrother, Martin and Dockerill were separated by just five seconds as the flag fell, with Telling rounding out the category.

You know you have it made when it’s your job to race Porsches at full tilt around a track. Nice one.