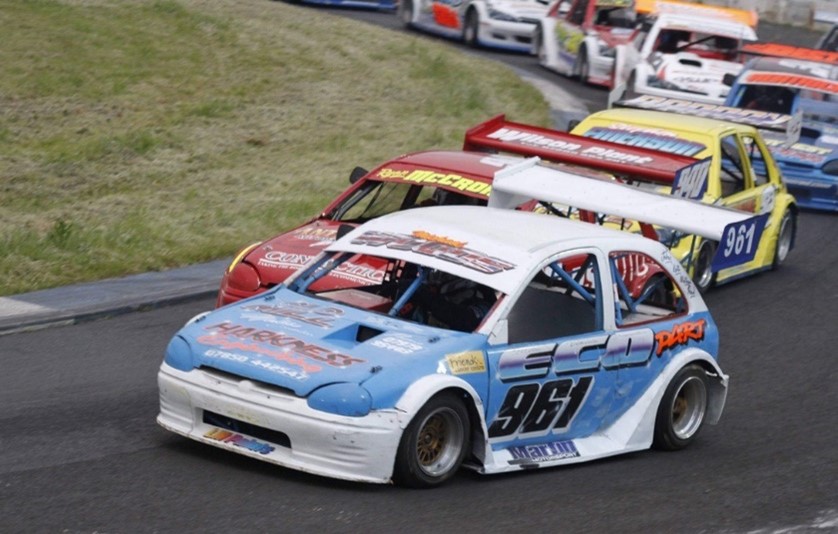 Saturday the 17th and Sunday the 18th of July sees DMC Race Promotions host the 36 top 2ltr hot rod drivers as they descend on Aghadowey Oval, Ballymoney, to compete for their coveted championship of the world. With the grid being comprised of the top points scorers from each driver’s home promotion there will be no shortage of talent competing for the coveted golden roof.

For those of you who are reading this and may be unsure as to what exactly a 2.0 Hot Rod or “2 Litre Hot Rod” is, they are a fully space framed race car. Most cars run the body shells of small hatchbacks, mainly Vauxhall Corsa’s, Peugeot 106’s or Citroen Saxo’s but are embellished with a much wider stance, paired wider Kevlar reinforced fibreglass bumpers culminated with a large rear wing. These machines are motivated by the choice of two engines, either a 2 litre Ford Pinto or Zetec engine, with either engine capable of sending around 165bhp to the rear wheels. By only weighing 700kg this is enough to power them to 85mph on some of the faster short ovals. 2.0 Hot Rods have been likened to “Jet Fighters in a Gymnasium” given the close and fast-paced racing of these cars it is clear to see why.

Who to look out for?

Given the unpredictable nature of short oval racing there is no way anyone could make a solid bet on who will lift the silverware, however there are a few men who have recently hit form and should be ones to watch. Antrim’s Conor Hughes will be coming into this event with momentum fresh from his British Championship win last month in Scotland. Fellow Antrim man Stephen Emerson will also be in hot pursuit of the title, Stephen has shown great form at Aghadowey and crossed the line first in the last major championship held at Aghadowey before unfortunately getting docked for contact on a slower car in the opening stages of the race, reliability issues have plagued the 923 machine all year, however Emerson will be hoping that he has all these gremlins past him. Republic of Ireland driver Ian Riordan will also be one to watch having already proven himself on Ulster soil after winning the coveted Lee Cherry Memorial in 2020. Portadown’s Jordan Rochford is no stranger to the top spot of the podium in a major championship, new to the formula he will keen to make his mark. Ex banger world champion Jason Jackson aka “Boxer Jack” has taken to the new non-contact hot rod formula like a duck to water and has shown great pace, Boxer will aim to be the first driver in the sport to win both a Hot Rod and full contact Banger World Championship. To round off this list, we need to include the current defending World Champion, Dave Leech. Dave is always fast and will be aiming to retain his gold roof and is certainly one to watch.

What Else Is On?

Although the Hot Rod World Final will be the main attraction of the weekend, spectators will also be presented with the Ford Sierra bodied Lightning Rods competing for their European Championship. Also in attendance will be young stars of the future competing for the Ninja Kart National Championship, although some of these drivers are as young as 6 years old there is no shortage of talent on display. Also in attendance is the full contact 1300cc Stock cars as they bid for their Irish Masters on Saturday night as well as the ever-exciting Stock Rods where 20+ drivers will be competing to be crowned the King of Aghadowey. The single seater, full contact Superstox class will be joining the Hot Rods, Lightning Rods and Ninja Karts on Sunday.

Where Can I get Tickets?

Tickets are on sale online through the following link, http://events.dmcracepromotions.com/?P=shop

Be sure to buy early due to limited spectator numbers as the even is being ran under COVID-19 restrictions.

More information is available through the DMC race promotion’s website: