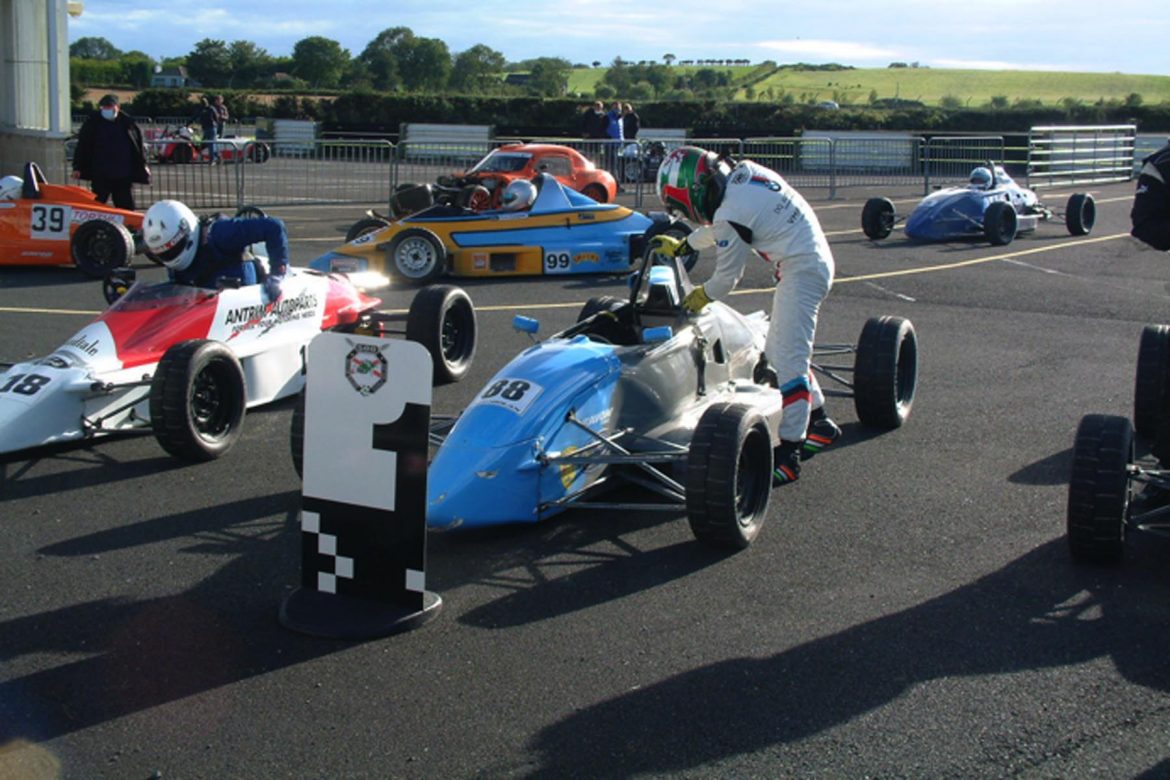 Remaining behind closed gates, four-wheeled racing returned to Kirkistown for just the second race of the Covid-19 season.

Car Racing at Kirkistown on Saturday 29th August began with the combined race for MX5s and Fiestas.  There were only four Mazdas but they were evenly matched.  However, Ballyhalbert’s David Cousins had a fuel supply issue on the warm-up lap and dropped to the rear of the grid.

Randalstown’s Paul Sheridan and Newcastle’s Eugene McCann were having a great battle with Tandragee’s Stephen Murray close behind.  When Sheridan tried to sell McCann a dummy into Maguire’s Hairpin, it went wrong and he spun, letting Murray and the recovering Cousins through.  This let McCann build a gap that he would not lose.  Meanwhile a titanic battle ensued with Sheridan, Cousins and Murray. At the finish, Sheridan just beat Cousins, who, in turn, was ahead of Murray.

In the Fiestas, it was the usual close affair at the front with Mark Stewart, from Belfast, Strangford girl, Megan Campbell and Neville Anderson all battling for the lead. Initially it was Anderson from Campbell and Stewart but on lap 2 Stewart got ahead of Campbell.  Two laps later he demoted Anderson to second and the places were then fixed to the end. Scottish driver, Stephen Walker took fourth from Newtownards driver Ricky Hull.  Paul Stewart, brother of Mark, rounded off the top six.

Superkarts had been the first race of the day, but three issues contrived to provide low numbers, particularly within the 250cc group.

Earlier, in qualifying, Richard Dewart had a major accident on his 250cc Superkart.  This resulted in his hospitalisation.  Thankfully, although his injuries were serious, they were not life changing or threatening and he is making a full recovery.  The fact that most competitors were racing the previous weekend also took a toll on machinery and exposure to Covid-19 directly affected one intended competitor.

Jonathan Adams was the 250 cc winner, while Comber brothers Peter and Alan Crossen renewed their 125cc rivalry.  Peter had won the third race at the July meeting and he continued his streak in this one, beating Alan by 0.161 seconds!  Ross Witherow, from Millisle was third.

In the second race Liam Fox, from Lisburn, took the 250cc honours, while Peter Crossan extended his winning run in the 125cc Class.

The final Superkart race saw Fox win again in the 250s but this time Alan Crossan broke his brother’s streak in the 125s.

Seventeen cars started the first combined Saloons and GT race.  In this meeting there was an unprecedented number of transponder problems that resulted in some very strange starting grid positions.  Dungiven’s Gerard O’Connell, who was obviously in the quickest car, ended up starting from the back.  So too did regular front runner, Stephen Traub, from Belfast, Dubliner, Philip Jones in a Supercar and likewise Hilltown driver Paul Parr.  This situation might be fine in contact sports like stock car racing but not in Saloons and GT.  On lap 3 the inevitable happened with a pile-up at Maguire’s hairpin.  This resulted in a red flag stoppage.

On the restart, O’Connell took three laps to get to the front. Shane Murphy, from Ovens, dropped from the lead to eleventh before getting the rear tyres of his Seat Supercopa warmed up.  He then proceeded to follow O’Connell’s example, taking second place on lap 4. Neil Tohill, from Newtonmountkennedy, somehow kept his Supercopa on the road with cold tyres and maintained his third place throughout.

Lurgan driver, Peter Baxter, who got his own Supercopa badly damaged at the July meeting, took his hire version to a well driven fourth place.  Stephen Traub had got his Honda up to fourth place before suffering a puncture and retiring on lap 5. Philip Jones brought his Supercar into fifth and Barry English, from Malahide, rounded out the top six.

In the second Saloons and GT race, Gerard O’Connell again dominated.  Starting from the back once again, by making full use of the pit lane, he passed nine cars before Debtor’s Dip and was in second place by the end of the lap. By lap 3, he was in first place, where he would remain.  Paul Parr was second in the GTs, well ahead of Philip Jones.  In the Saloons Barry English won from Shane Murphy.  Stephen Traub was third.

The first N.I. FF 1600 race was a tense affair at the front but it gave The Randalstown Rocket, Alan Davidson, his first win of the season in his “new” car.

The transponder issue resulted in the Formula Vee B & C race being converted into an extra qualifying session. The single Vee race turned out not to be the usual “any one from eight could win” affair.  Instead it was only five! Philip Sheane, from Wicklow, Gavin Buckley, from Dublin, Mark Reade, from Rathangan, Tim Murray, from Tara and John-Benedict Farrell, from Newry all fought for the lead from the start.

Initially it was Reade and Sheane swapping first and second places for ten laps, while Buckley kept them honest. Murray and Farrell were swapping fourth and fifth places. From Lap 10 onwards, Reade faded, eventually finishing sixth. This left Sheane in the lead, with Buckley second. Murray retired on lap 10, allowing Farrell a clear run to third.

The two Ginetta Junior races were well supported by recent standards.  Eight cars turned out.  In race 1 the official results were 1st, Jack Byrne, from Ballinaboola, 2nd, Karl O’Brien, from Dublin, 3rd, Sean McGovern, from Sandyford.  In this race, Seamus Og Martin, from Dunloy, and Andrew Crosbie, from New Ross, were excluded from the results because their transponders were not registering.

The first Roadsports race saw a massively popular maiden win for Steve Morris, from Welling.  He finished almost half a minute ahead of Paul Thompson and Cameron Boyd.  The second race saw Mark Crawford, from Banbridge, having an equally impressive winning margin over Morris. Third place went to Moira’s Kieron Smyth in his unusual Stevenson Rocket.

In the Fiestas, Neville Anderson found himself in a Stewart brothers sandwich for the whole race.  At the finish it was Mark Stewart who won, from Anderson, with Paul Stewart third. Megan Campbell was fourth.

The Race Of The Day was undoubtedly the second NI FF1600 encounter.  It compared with the great FF1600 races of the 80s and 90s when the likes of Fionn Murray and Alan McGarrity were battling.

This race was all about four immensely talented drivers, David McCullough, from Ballymena, David Parks, from Ballina, Morgan Quinn from Kill and The Randalstown Rocket, Alan Davidson.  From the start, Davidson shot into the lead, from McCullough. Parks was keeping a watching brief and Quinn had moved from sixth to fourth in a lap, to pressure him.  These two closed in to the battle for first, forming a four car battle.

Davidson was doing everything he could to keep the younger cars behind.  He was quicker through the Crosslé Chicane, which gave him just enough speed to stay ahead on the long run to Maguire’s Hairpin.  However, it was an impossible task, which he controlled for six laps, before McCullough got through.  On the same lap, Quinn got by Parks. Two laps later he, too, passed Davidson. On lap 8, Parks broke Davidson’s defence, to take third and challenge Quinn.

Keep in mind that there was never more than a foot between the four cars, with sometimes attempts at four wide manoeuvres at Maguire’s hairpin.  On lap 11 Quinn got the lead from McCullough.  A lap later Parks tried a mega late braking move into Maguire’s Hairpin to attempt to pass McCullough but he over did it and spun, letting Davidson back through. Time had run out and at the flag it was Quinn, 0.079 seconds ahead of McCullough. Davidson was third and Parks recovered to fourth.  The gap between the first three cars at the finish line was 0.724 seconds.

Had there been spectators, this race alone would have been worth the entry fee. The next car race at Kirkistown is on Saturday 26th September.

Words and photos: DONAL O’NEILL | 500MRCI
images must not be used in any way without prior written consent of the photographer

How Does Audible Function?
To begin with, you take out a free trial of Audible and
get a free audiobook. This really is among the classics or even an originals.

At the end of the trial, you can purchase a subscription of Audible.
You will need to sign up for the membership.

Each month, you are awarded by Audible with one credit. You can take advantage of
this credit to buy Audible audio books in various categories like technology, fashion, love,
social media, advertisements, etc..
If you would like to buy books, you can purchase more Audible credits or pay
per sound publication.
Interestingly, a member may download two of six star Originals.
They do not charge any credits. You can continue to keep these
Audible Originals forever.
You own Audible books in your library even in the event that
you cancel your subscription.
It is possible to listen to Audible audio books anywhere using apps for Windows, your phone or
Mac computer or Alexa apparatus.|

With more than 300,000 titles to its name, Audible is the world’s largest seller and manufacturer of audiobooks.