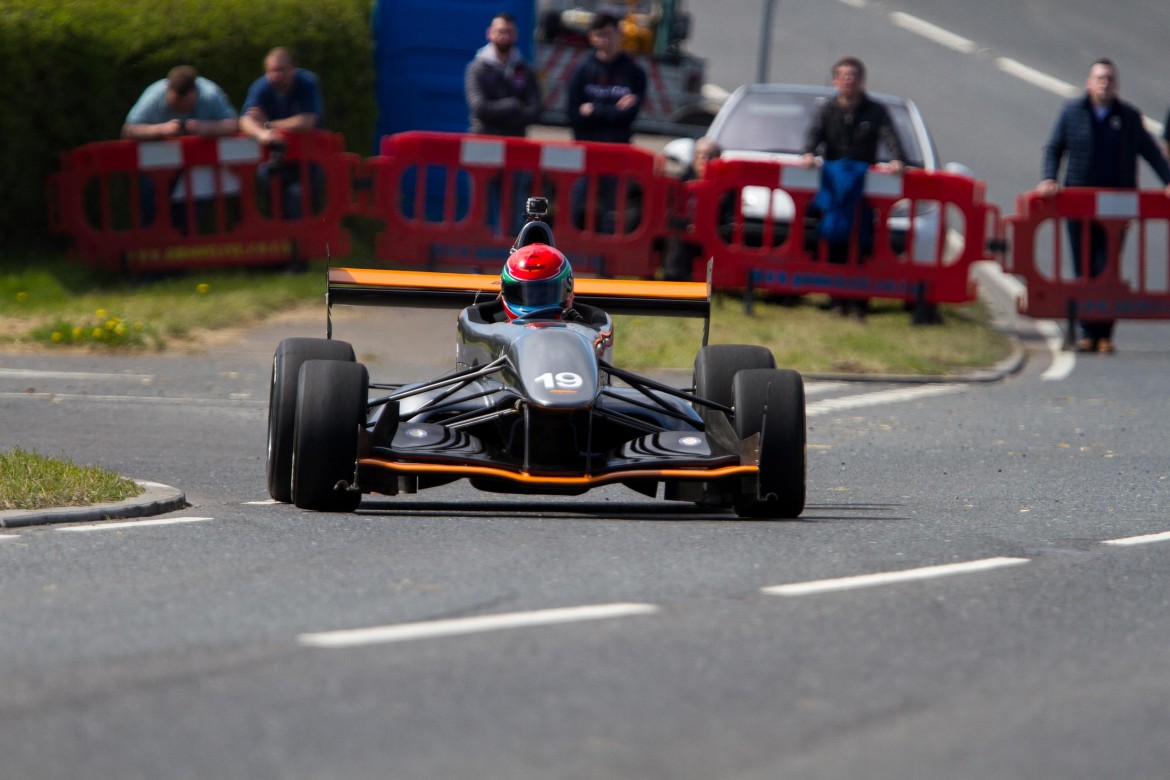 Saturday (5 May) saw the hills around Belfast East, reverberate to the sound of hillclimbing – hillclimb is a motorsport initiative popular throughout Europe and rest of the world alike, but in the UK, some of the most exciting events are right here in Northern Ireland.

As a welcomed round of the Avon Tyres / Wynn Developments MSA British Hillclimb Championship, Craigantlet, which is hosted by the Ulster Automobile Club, is one of very few rounds of the series that is set on closed public roads, I stand corrected on this but I think the only other two rounds on public roads are those held in the Channel Islands.

For this reason, the Belfast event is one which is fondly looked forward to as it offers the first chance in the calendar for cars and drivers to stretch their legs in somewhat unfamiliar territory, meandering up the Belmont Road whilst utilising parts of the Ballymiscaw Road on its course. From dedicated race cars costing hundreds of thousands, to a humble clubman classic, you see it all on the hills

As with all things in the non-race world, there really is something for everyone at these events with vintage – classic – road going – saloon – rally – modified – home built and single seater but to  name a few, with pretty much anything you could imagine in between.

With such a variety comes vast differences in speeds and technology as well as budgets which is fascinating to experience all in one day, in the same venue, and with a relaxed atmosphere with an open paddock where you can get up close to the cars and drivers.

So onto this years event, and a class round-up…

Class: 1 Roadgoing under 1700cc 2wd and Dennis Watson had it all under control – setting the bar and then chipping away at that time each run in his roadgoing 106. Andrew Tucker also knocked seconds of his time throughout the event, but neither his MX-5 nor Pete Storeys Rover 25 could live with the pace of Dennis’s 106. Great driving by all, however, Steven Gaults 2008 records lives on.

Class: 2 Road going over 1700cc 2wd saw a great win for Chris Rogan and being very close to nipping David Finlays 2016 record meant Chris maybe pushed a bit too hard on that final run – minor damage sustained as it went a little messy near the top of the hill. Class: 3 Road going 4wd saw a fantastic time and drive from Paul Montgomery in his Subaru Impreza with a 50.97– very close to a great record set by Ivan McCulloughs GTR in 2016. Barry Impreza and Brian Forrester where a little further back but both provided great soundtracks as they set their times – nothing much beats a flat 4 with the volume up loud.

Class: 4 and Gardiner and John did battle again today in class 4 and Gardiner took the win – a little off his own record but two good performances in two well turned out cars.

Class:5 was a first for John Mackenzie with a superb time of 50sec dead, 2nd was a much closer affair with Kieran Smyth and Tosh Townsend separated by less than half a second with Smyth pipping Towsend to the line.

Class: 6a modified production 8v and Gordon Fogarty was in imperious form again today nudging his own record down lower once again to a time of 55.65!

John McDowell and first time competitor, Nick Caughy, drove well to complete the top 3 in their escorts, while Gary Milligans mini and David Evans 205 kept them honest –Maybe Gordon has a shout at the Leaders Championship this year!?! Time will tell… Class: 6b modified production 16v was tight at the top with Brian Fitzmaurices White Honda Civic pipping Lee Kirkwoods 106 to first place with a mere 1.7tenths between them! Colin Dines took 3rd. Both Brian and Lee where pushing hard today and bravery was on show through the last corner as the day run its course. Great commitment from the men of 6b.

Class: 8a 1400cc sports libre and Rudi took the win today with a time of 51.51 but the time-sheet would suggest that an issue was encountered during run 2 and he still wasn’t back on the pace come run 3, we have seen it before and today was no different, one clean run is all Rudi needs to secure the win. Ian Howard in 2nd with a very respectable time of 52.69.

We missed Roger today after his accident at Drumhorc, sounds like it will take some time and effort to get his motor repaired and race worthy again – Good luck with the rebuilding process.

Class: 9 Sports Libre saw a tale of two standards in this class – Ray Rowan was 1st and 6th overall in his Pilbeam and Gerard O’Connell was 2nd and 10th overall in his radical – two mighty drives today. Then drop back 6/7secs and Mark Francis was 3rd driving the now Iconic white Escort with plenty of HP on tap whilst Peter Mckinley in his mk2 was 4th.

Gary McWilliams slid his way to 5th in the turbocharged Starlet while Tony McLaughlins beautiful blue BMW was 6th. Class:10 small capacity rally class and Alan Cassells proved once again why he is seen as a contender for this years leaders championship taking the class record on his first timed run and then bettering that again on the 3rd and final run. Garth Neill only managed 1 timed run – i’m not sure of the explanation for that just now.

Class: 11 large capacity rally class where father and son, Garry and Daniel Campbell fought over top honours in this class, but youth came out on top this time as Daniel pushed the Starlet hardest with a time of 52.99, Garry second with a time of 53.51 and third was Mervyn Johnston in his beautiful Chevette, always a pleasure to see it out.

Class 12 Sports Libre 4wd possibly the tightest Battle of the day? Certainly a contender. The whole class covered by less than a mere 2 seconds. Congratulations to our visitor Allan McDonald in this 4wd Mini who struggled a bit to reproduce or better his first timed run but it was enough to secure the class win and record.

Then 3 local monstors – Ivan McCulloughs GTR, Michael Whites Legacy and Oliver Cormicans Evo split by less than a second. A great spectacle for the spectators to see such heavily tuned machines let loose on public roads.

Sometimes people ask just how fast these Class 12 cars really are? Well today if you sorted the overall results (including all our visiting single seaters!!!!) by 64ft times…. The list would read…

I think the technical term is ‘Serious Ooomph’ George Stevenson in his Jedi

Class 14 Racing Cars up to 2000cc saw two visitors today and both set times under the existing record, congratulations to Simon and Darren respectively. On to our local men and George Stevenson set an impressive time of 47.91 in his stunning blue Jedi, followed by John Donnelly and Brendan Flynn who both came in under the 50sec marker.

Class 15 Racing Cars (all other) and as always we look here for our outright overall winner and today was no different in that regard, but when it comes to Craigantlet, there is always the added awe at the level of competitiveness and speed displayed by the travelling teams.

The top five separated by less than 0.5sec (40.28-40.70) but still a little way of Scott Morans outright hill record of 39.12 with Will Hall taking the top honours today.

For the NI Hillclimb competitors, our headline could be ‘Ricky McGimpsey marches on!’ and it was great to see three of the McGimpsey family out competing and putting in some serious times. John Stewart kept them very honest with a great time of 48.73 in his second timed run but in the end, couldn’t quite manage to split the McGimpsey strangle hold. Ray Rowan cutting his way up the hill

Class 16a roadgoing historics is a class made up of a Lotus Elan, a Triumph and a Frogeye Sprite, all special in their own right. Jago Bret took top honours in the Lotus, Paul Robinson 2nd in the Triumph with Trevor McElroy 3rd in his lovely Frogeye Sprite

Class 16b non roadgoing historics saw Alan Jardine obliterate the existing class record by over 2sec in a fantastic first timed run of the day. Alan’s subsequent runs didn’t yield a better time but the record breaking run was more than enough to seal the class win ahead of Simon Brein and Dominic McGowan.

Next up – SPAMOUNT on Saturday 26 May…

Words: NI Hillclimb Championship Team | Photos:  Graham Curry
[images must not be used in any way without prior written consent of the photographer]