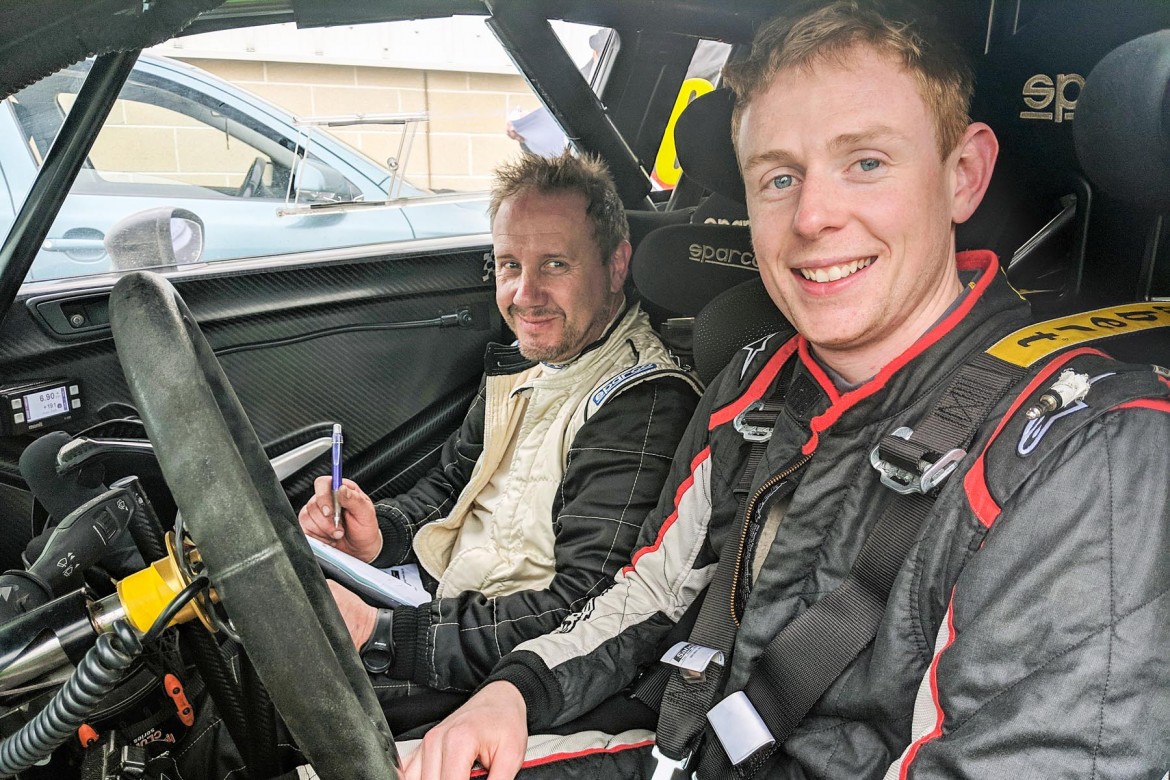 After what was a drama-filled day, Wright powered his Ford Fiesta R5 to the finish line 6.2 seconds ahead of the Skoda Fabia R5 belonging to Darren and Nathan Gass while Derek and Mark McGeehan were third in their Mini WRC. The event started with Derek McGarrity and Kieron Graffin setting the pace in their ex-Martin Cairns Ford Fiesta WRC. The crew simply annihilated the field on the opening stage when they emerged more than eight seconds clear of nearest rival Wright.

McGarrity continued to set the pace over the ensuing tests while others haemorrhaged time. Wright dropped down the order with a couple of spins while Darren Gass incurred a 10-second penalty for cutting a corner.

“We went on the inside of a tractor tyre to get past another car on the second stage,” Gass explained. “We had probably already lost 10 seconds being stuck behind them!”

However, it all changed when the heavens opened just before the start of stage four. As the crews started to line up for the start, a deluge of rain at the Kirkistown Race Circuit venue transformed the conditions.

Many of the front-runners were caught out on the wrong tyres, including rally leader McGarrity, who caught another car and seemingly dropped 25 seconds to the fastest time set by Wright.

“Our time for that stage is 30 seconds slower than it should be,” McGarrity said at the time. “OK, we’re still leading but that’s not the point. I don’t know if it’s going to be corrected or not.”

The erroneous time dropped him into the clutches of Stephen Wright. He had set fastest time on the test and jumped from seventh overall into second position, just 4.4 seconds behind McGarrity.

However, the suspect time was to be the least of his worries. He was back on form through stage five and set another fastest time – his fourth of the day – to lead the event by 5.4 seconds with one stage remaining. Then disaster struck.

After the finish of the stage and as he returned to his service bay, flames were spotted under the bonnet of his Fiesta WRC. His crew grabbed the fire extinguishers and extinguished the fire but his Fiesta was going no further.

“The car became too hot and melted a pipe,” one of his mechanics explained. “It was a plastic pipe so we couldn’t fix it for the final stage. McGarrity’s exit put Stephen Wright in prime position for the rally win. He entered the final test with 4.8 seconds in hand over Darren and Nathan Gass. Another solid run ensured that the Newbliss man secured victory as well as maximum points in the McGrady Insurance N.I. Rally Championship!

“We made life difficult for ourselves!” Wright admitted, referring to his two spins. “We dropped quite a lot of time on stages two and three but then we got a lucky break with a good tyre choice on stage four. We were a bit fortunate in that our seeding was quite far back so we had a bit more foresight (when it came to the weather conditions and tyre choice) than the rest of our competitors.”

“I’m very happy with the day out and it was great to have Keith navigating for me. He’s always on the spanners and always keeping this car in absolutely top shape. It was great to have him alongside and he was able to tweak things through the day to help get us here.”

He added: “We didn’t set out this year with any particular championship in mind…but this win certainly makes it more tempting to do the Northern Ireland Championship!”

Coming home in second position, Darren and Nathan Gass were left rueing that 10-second penalty but the crew were gracious in defeat as they congratulated the rally winners.

“We caught other competitors on almost every stage,” a resigned Gass said, “but what can you do? It’s the nature of these events.”

“Catching cars is always an issue,” Derek said. “We had it four times in a row but we still had a good day.”

The Mini WRC crew were pleased with the result, especially after the opening stage when they couldn’t understand how they were so much slower than early leader McGarrity. However, they picked up the pace to rise from a low point of seventh overall to finish in the top three.

Former N.I. champion, Kenny McKinstry, didn’t escape unscathed in the difficult conditions as he was another driver who lost time with a spin. He kept his head together and eventually finish fourth overall ahead of Alan Carmichael and Samuel Hamill who enjoyed a day of testing their Hyundai R5.

“We had some big drifts and the car handles brilliantly,” a delighted Carmichael said. “It does everything well. It’s so nimble compared to everything else. I came out for a good test and that’s what we had so I’m happy.”

Joe McQuillan and Charlotte McDowall were equally delighted with their sixth overall finish. They lost a few seconds with a misfire but ultimately it didn’t cost them a position at the finish.

It was McQuillan’s second event in his Impreza WRC and he also emerged victorious in his much-hyped battle with friend and rival, Brian Watson, who lost time on the opening stage with power-steering trouble.

Sean Devine made a successful return to the N.I. Championship after a long layoff. Navigated by Sean Ferris, they spent the day learning their new mount in preparation for the long season ahead.

“It was my first day out in the car and I’ve got a lot to learn but I enjoyed it,” Devine revealed. “I’m looking forward to doing the full Northern Ireland Championship.” In the two-wheel drive battle, it looked as though Keith White and Paul Mulholland were going to edge away with the category win until rain struck on that fourth stage. The crew were caught out on the wrong tyres and dropped like a stone behind their main rivals.

“We were never going to catch James Kennedy after that fourth stage,” White said. “So I just slid the car about on the last stage and enjoyed it.”

Instead, it was the reigning two-wheel drive champions, James and Heather Kennedy, who claimed the category victory. They had trailed White until the wet stage four gave them an opportunity to move in front.

Running a bit further down the order, Kennedy had the opportunity to fit some wet tyres to his Escort and powered into the lead. That proved to be the turning point of the event and he stayed in front to claim the category win as well as eighth overall.

“I wasn’t looking forward to the wet at all but we had a really good run,” Kennedy said. “We had a small overshoot in the morning and I thought the power in Keith’s Escort was helping him to edge ahead in the dry conditions but then it all changed.”

White eventually finished second in the category, just outside the top 10 overall, while John Devlin and John McCarthy were third ahead of Fintan and Cormac McGrady.

Gareth and Jonathan Nevin were fifth in class and 19th overall, just a couple of seconds ahead of Drew Stewart and David White who lost third and fourth gear midway through the day. Luckily, they had a spare gearbox with them and their service crew swapped the ‘box during service, keeping them in the rally.

Unfortunately for Kyle White and Alan Purdy, they weren’t as lucky. They lost all drive towards the end of stage three and although they managed to finish the test, a damaged ignition coil put them out of the rally.

“It’s only a £15 part,” explained his father, Gary White. “We walked around to try and find a petrol road car that could donate the part to keep him in the rally but we couldn’t find a suitable car.” Richard Tannahill used the event to bed himself back into the groove after his last rally resulted in an accident. He and navigator Cheryl Tannahill climbed four places on the final stage to seal ninth overall from the Impreza belonging to James Leckey and Jordan Murphy.

With Keith White in 11th and Brian Watson in 12th, Liam McFall and Matthew McKenna enjoyed their debut drive with the ex-Niall Henry Evo X to take 13th ahead of the Fiesta WRC belonging to Dominic McNeill and Tommy Speers.

Others worth mentioning include Jonny and Simon Morrow in their stunning Mitsubishi Mirage RS. They lost a bit of time with a misfire but claimed 16th overall from the Mini WRC belonging to Nigel Feeney and Nikki Addison, who enjoyed their first visit to the Kirkistown venue. Round two of the McGrady Insurance Motorsport UK Northern Ireland Stage Rally Championship takes crews to Bishopscourt Race Circuit on 9 March. The event marks the second and final race circuit based venue of the season and is always a popular location.

More information will be revealed at www.nirallychampionship.com.