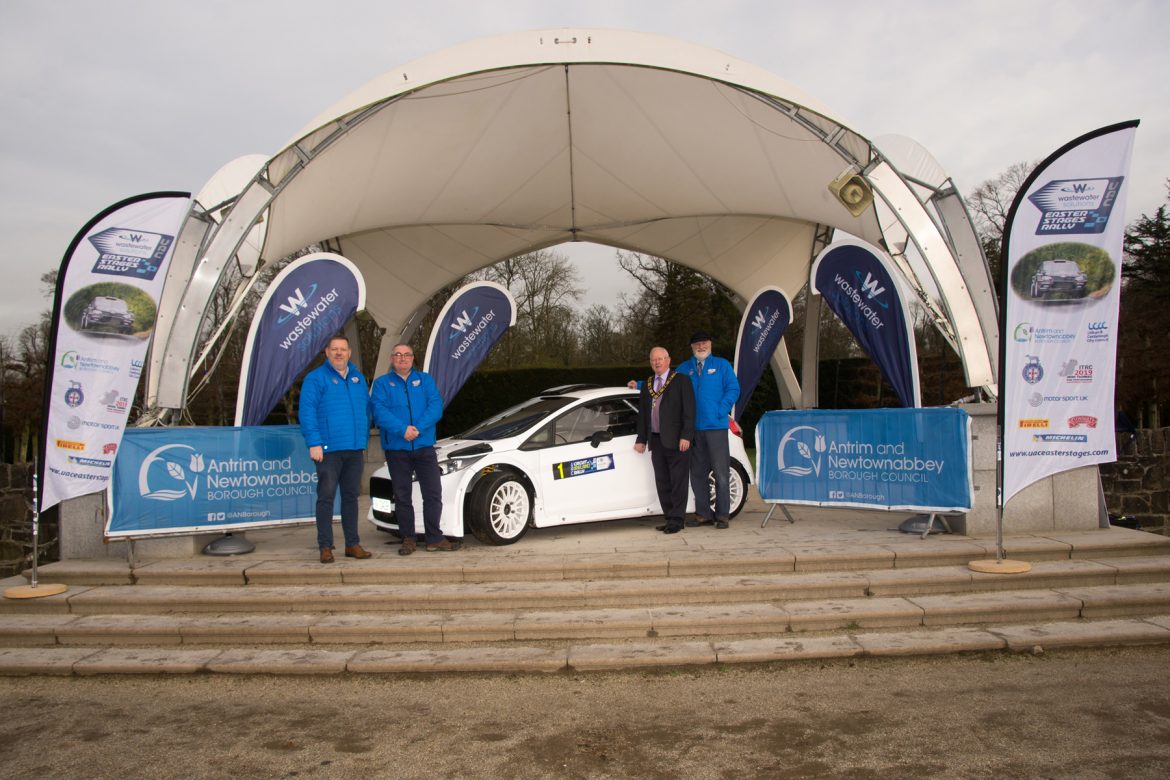 THE CIRCUIT OF IRELAND RALLY GETS READY FOR EASTER.

Antrim and Newtownabbey Borough Council are delighted to be supporting the return of one of the most evocative titles in Irish Motorsport the ‘Circuit of Ireland International Rally’ colloquially referred to as the ‘Circuit’ to their Borough area and the inclusion of the event as a round of the FIA Celtic Rally Trophy just lifts the whole package to a new level.

“We have so many beautiful places of interest to visit throughout the Borough which visitors can find out about on our new tourism micro site, www.visitantrimandnewtownabbey.com. Last year this event generated almost £0.5 million of economic benefit and we hope to see this increasing in 2020. I hope everyone is gearing up for this action-packed weekend.”

The event sponsor, Wastewater Solutions, are elated that the ‘Circuit’ is back and organisers have introduced an International element to the rally which will take place over the Easter weekend on 10th and 11th April 2020.

“As the title sponsor, I am thrilled that the Ulster Automobile Club (UAC) have ‘awakened the Giant’ and re-introduced the title – Circuit of Ireland International Rally. It’s long history as an iconic attraction for motorsports fans will be complimented by the spectacular stages that reflect the scenic beauty of Northern Ireland.

“The roar of engines, squealing tyres and handbrake turns are all part of the excitement which the rally brings. As a competitor I recognise the hard work by all of those involved and would like to thank them for putting together a fantastic event which helps to promote and raise awareness of the quality of motorsport in Northern Ireland.”

Event Director, Graeme Stewart, commented. “The event is the third round of the Irish Tarmac Rally Championship and a counting round of the FIA Celtic Cup a round of the European Rally Trophy. The UAC Easter Stages National Rally will run in tandem with the ‘Circuit’ over the two days.

“We are also providing a one day Interclub rally on Easter Saturday, so we are looking forward to a ‘giant’ entry giving lots of opportunities for competitors and spectators to enjoy the weekend over classic County Antrim stages.

“We have chosen stages which will allow the best drivers from across Europe to ‘mix it’ with our home grown talent, of which there is no shortage. The event has been increased to 18 stages resulting in even more competitive mileage over the two days.

“We are thrilled to be returning to the Antrim and Newtownabbey Borough Council for a third year and truly appreciate both the enthusiasm and the substantial support of the Council necessary to promote an event of this magnitude. The Chimney Corner Hotel once again acts as Rally Headquarters providing all the facilities competitors and spectators need.

“We would be keen for spectators to join us for the non-competitive parts of the event such as the Finish in the award-winning Antrim Castle Gardens on Easter Saturday and Dundrod Motorsports Centre which hosts the centralised service area.”