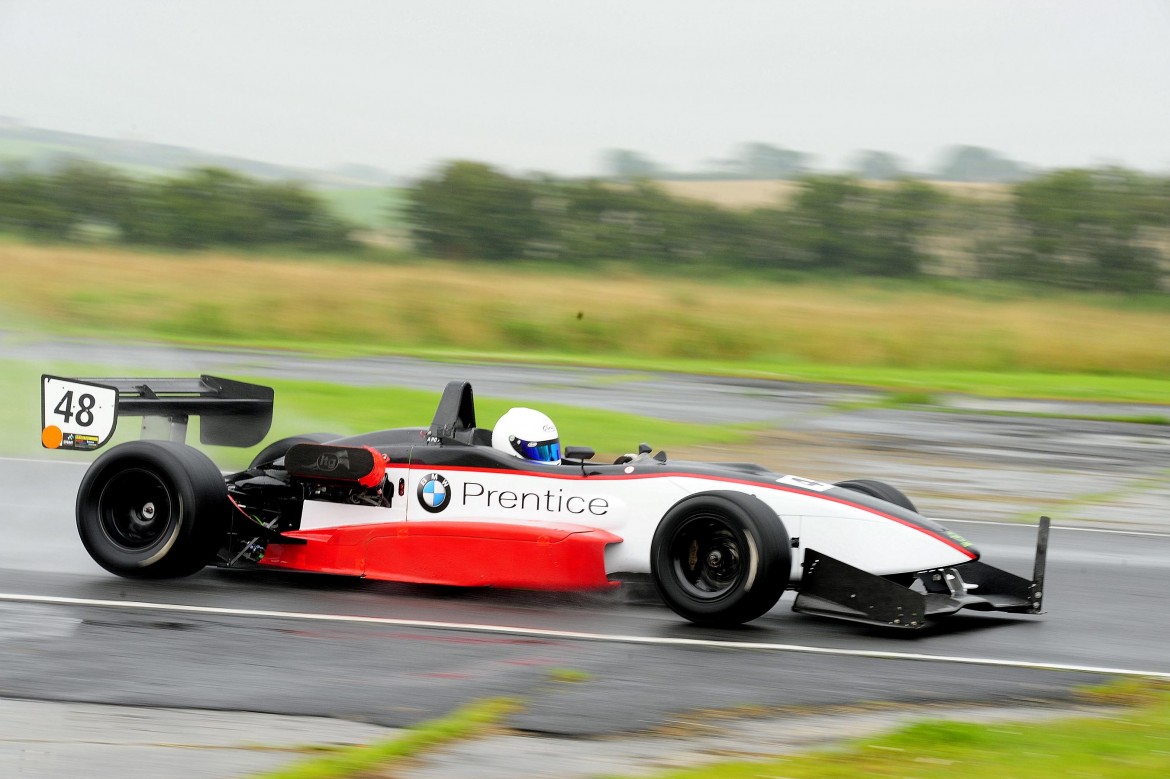 As usual a bumper entry of 82 drivers lined up to contest the event, which also was round 11 of the SBD Motorsport British Sprint Championship.

With the weather forecast showing a great morning with a slight chance of rain, practice got under way around 10 am and the high speed antics commenced. After an uneventful practice session, the timed runs started around 1230 as predicted.

As the first timed runs commenced, a series of dark clouds rolled in and a few spits of rain fell.

With no serious rain forecast for the weekend, no one batted an eyelid until the heavens opened. In fact it would be safe to say that the heavens opening was an understatement.

After a fabulous run, local road-going competitor, Andrew Robb, topped the time-sheets in his BMW M3. He remained there almost throughout the run with only 6 of the single seaters managing to beat his time. That is some going when you consider he was in a road-going car on road legal tyres. He finished 7th overall in the first runs by my reckoning.

Whilst it may appear somewhat corny to quote a famous saying “the always cream rises to the top” this was certainly the case in the first runs. With the circuit struggling to cope with the deluge of rainfall which fell in such a short period of time, Adrian Pollock appeared on the start-line on a set of slicks!!!!!

A local competitor, who is famous for his very public wrong weather predictions, was heard on the start line asking, as he left the line in a cloud of spray, if Adrian was clean mad or if he knew something that no one else did.

It appeared that Adrian did know something as he stormed off to set a phenomenal run of 131.96 secs which put him to the top of the time sheets in his Dallara GM F301. Adrian`s speed trap speed was 96 mph on his second lap, on slicks, in the pouring rain!!!!

As the day continued, circuit conditions improved and as the track dried up the times tumbled, however the local competitors remained fully in control.

With the overall win, Adrian further increased his lead of the Northern Ireland Championship by 1 point from Steven Gault who was second on the day and second in the championship. A strong 6th place finish netted Mr Consistency himself, Joe Courtney, championship points for third place which sees him remain third in the championship, 5 points ahead of fourth placed Trevor Roberts who continues to drive his little 1.1 Jedi way beyond the pace you would expect this little pocket rocket to fulfil.

In terms of the modified championship contenders, Gerard O`Connell was fastest of the modified contenders in his beautiful Escort Mk1 which still adorned stickers from his recent trip to St Guenno Hillclimb in France. Gerard set a fabulous time of 127.77 secs which saw him finish 17th overall.

Oliver Cormican took second place honours in his flying Mitsubushi Evo with a run time of 132.04 which saw him finish 24th overall and Stewart Strain took the honours of third modified car in his Peugeot 205. Sadly Dermot O`Hagan, who has taken this years modified championship by storm in his civic, had a disappointing day after engine woes sidelined him in first practice.

In terms of the modified championship, Oliver Cormican remains solid at the top with a 6 point lead over second placed Gerard O`Connell. Dermot drops to third 3 points behind Gerard.

To further enhance the excitement in the modified championship the top 3 drivers are all still to marshal and Gerard and Dermot have now dropped 2 scores whereas Oliver has only dropped 1 score. So its still very close at the top, and then of course you have David Strain in the mix in his Peugeot 205, 1 point behind Dermot.

In the battle for the road-going series, Andrew Robb took top honours again in his BMW M3. Andrews fastest run of 141.34 put him 38th overall and 7.3 secs ahead of second placed Stephen Donnelly in his Clio.

Alfred Robb took third in the Road-going series in the family BMW. Andrew leads the road-going championship with a perfect score of 28.

Andrew has a 10 point lead over Alfred Robb and Aaron Vance remains third in his Clio, 10 points adrift of Alfred. With Andrew already having 28 of the 38 possible points available in the road-going championship it’s safe to say that Andrew is extending his hand towards this particular prize and he will be hard to put off.

In terms of the Historics, Stephen Strain took historic honours in his Mark 1 Escort from Gerry McGarrity in his mini with Mervyn Getty third in his MGB GT. As the season continues, it is becoming apparent that none of these historic drivers drive their cars in a way which is fitting for an older car to be driven. Stephen Strain put in a performance, especially in the wet, that Ken Block would be proud of as he slithered the Escort around the track going from lock to lock with his foot firmly planted to the floor.

At one point his helmet struggled to contain his smile. Gerry, as always, was thrashing his poor little mini to within an inch of its life and is rumoured to have moved the front drivers headlight 6 inches further forward to allow him some extra toe room as he continues to push the mini to the max.

In the much coveted battle for the fastest Mini in the west, Gary Milligan took the honours with a fine drive which saw him finish 2.65 secs ahead of Gerry. Sadly Karl Johnston had mechanical issues which saw him drop out of the local battle during practice.

Under British Championship rules, competitors complete 2 timed runs and then the fastest 10 go head to head in a run off, where they get 2 runs to set the fastest time, starting with the slowest qualifying car going first and the fastest car starting last.

John Loudon started the run offs and set a run time of 124.73secs. Next up was Mark Anston and then the rest of the run off competitors took their runs. Sadly Graham Porrett had to abort his run off after mechanical gremlins intervened. Peter Goulding then went fastest before Colin Calder launched himself off the start line in his 3.9 Gould single seater.

Sadly Colin was unable to complete his run after a major off at debtors which saw one of the biggest accidents witnessed in Sprinting in many years. Thankfully Colin was uninjured but the car was badly damaged. John Graham took maximum points with Peter Goulding second and Nick Algar third.