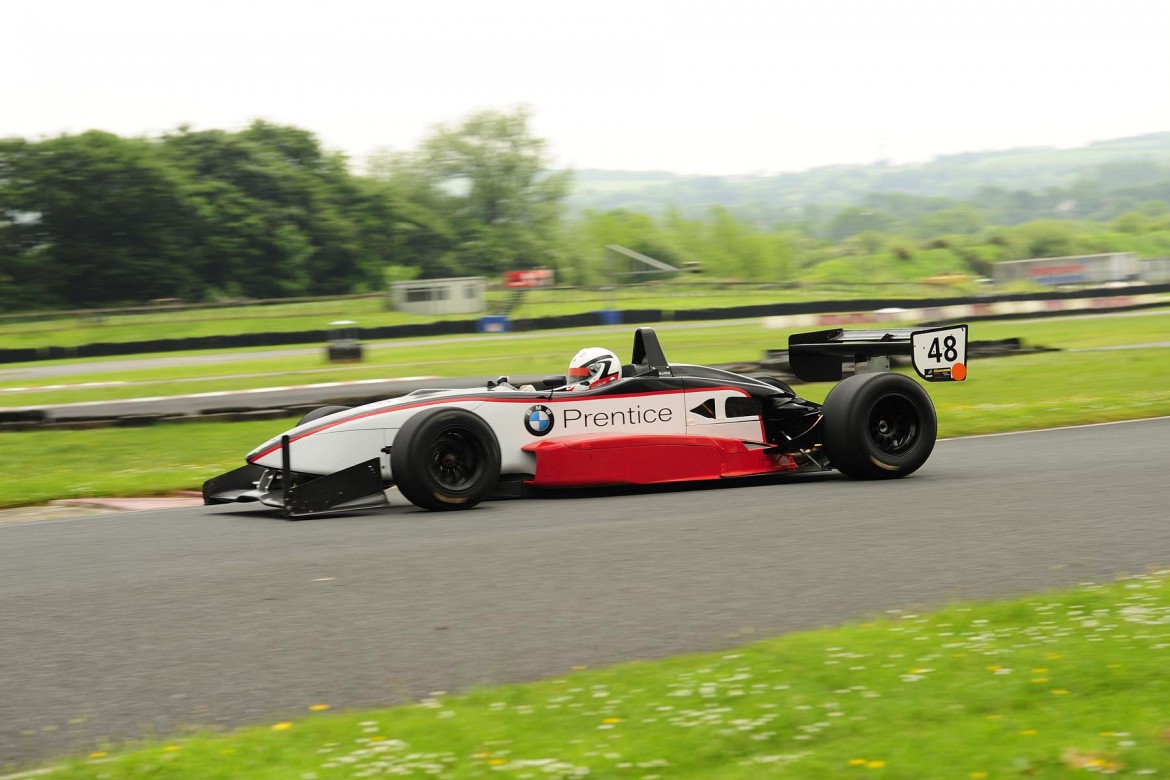 Despite the previous day’s heavy rain, the fourth round of the S.W. Adair Northern Ireland Sprint Championship took place at Nutts Corner on Saturday 2 June in weather which was on a par with that which was being enjoyed by those doing Rally Barbados!

Despite a foggy start to the morning, the sun broke through and stayed all day with temperatures almost as hot as the action on the track. A total of 57 competitors entered the Johnnie O’Neill Memorial Sprint, which was hosted by the North Ulster Car Club, and what a superb event it was.

With hot temperatures and a hot track, Omagh’s Adrian Pollock left the line like the proverbial scalded cat to start his first run and topped the timesheets, where he remained all day.

Adrian took the overall win and set fastest time of the day with a blistering run of 91.36 seconds. This was his second overall win of the season and he has extended his lead in the Northern Ireland Sprint Championship. He now holds an advantage of two points over John Morgan.

Greencastle’s John Morgan was second overall in the family Pilbeam MP82 after a titanic tussle with Ballymoney engine builder Steven Gault. Steven is finally getting to grips with his Reynard so he and John Morgan swapped second place between them all day. They were only separated in the end by 0.02 seconds after John Morgan put in a last run charge to beat Steven’s second timed run.

Larne’s Gardiner Mcilwaine took the road-going category win in his Westfield by 0.28 of a second from Kenny Wylie in his Nissan GTR while Michael Clarke was third in his Lotus Elise. Fastest historic was Gerry McGarrity in his fabulous Mini.

The class battles are where the closest and hottest action was throughout the day and class two was the hottest of all. With Michael Clarke and Stephen Donnelly taking first and second places respectively, third place was up for grabs and both Andrew Robb and Mark Lynas wanted it.

During the day, the battle was so close that there was never any more than 0.12 seconds between the two drivers. Mark Lynas was fastest in practice and set the early time to beat in his first run, but Andrew Robb accepted the challenge and was the fastest of the pair in the second and third runs. The battle was so close that both men finished up with exactly the same best time of 124.50. They were dual driving the same car!

The close battles continued in class 6a where Portavogie man, David Evans, led the class throughout practice and into the timed runs. After two timed runs, the top three were separated by a mere 0.26 of a second.

Evans had a 0.14 second lead from newcomer Scott Walker in his Nova, who in turn led Gary Milligan by a mere 0.12 of a second. A chuffed Milligan then set a blinder of a third run time to take the class win from Evans by 0.71 seconds which was 0.97 faster than his previous best run.

The S.W. Adair Tyres Northern Ireland Sprint Championship now enters its summer break before the fifth round of the championship which is hosted by the 500 MRCI at the fast-flowing Kirkistown Circuit on 4 August. This is usually a very hotly contested and well supported round as it is also day one of a two-day double header MSA British Sprint Championship event. Class 1 Road-going Series Production Cars up to 1700cc 2WD: Gary McClurg took the win in a lonely but competitive drive in his Citroen 1400cc AX and set a time that would have given him a comfortable third in the bigger over 1700cc class amongst the newer and significantly more powerful Clios.

Class 2 Road-going Series Production Cars over 1700cc 2WD: Michael Clarke topped the class two section of the timesheets right from the off in his little Lotus Elise from Stephen Donnelly’s Clio. Andrew Robb took third after an immense battle with Mark Lyons. This is definitely going to be a battle to watch over the remainder of the season.

Class 3 Road-going Series Production Cars 4WD: Kenny Wylie had a lonely drive to the class win in his Nissan GTR. Hopefully we will see Kenny out more often?

Class 6b Modified Series Production Cars Multi Valve 2WD: Andrew Straney took the class win in his Astra from Portaferry’s Brian Fitzmaurice in his Honda. Third place went to Colin Dines in his Clio who pipped fourth placed Jonathan Babb by 0.17 of a second in a blinder of a final run.

Class 7 Modified Specialist Production Cars 2WD: Clive Latimer in his Sylva Riot was the man to beat in what is only the second time he has driven this car. Clive’s time of 101.09 seconds placed him seventh overall! This combination has a lot more to offer when Clive gets some more time in the car. Second place went to Graham Boyce in his DAS and Trevor Allen took third from Tom Devaney in what was another very close battle with only 0.25 second separating Tom and Trevor at the end.

Class 8a Sports Libre Special Saloon Cars up to 1400cc 2WD: Championship co-ordinator, Ian Howard, in his Maguire Mini took the class honours from Lewis Dunlop in his Mini Cooper. Both of these Minis are a great sight to see and it must be remembered that Lewis’ Mini is a steel Mini unlike Ian’s Maguire Mini. Ian finished 13th overall and was the fastest saloon.

Class 8b Sports Libre Saloon Cars up to 2000cc: Gary Campbell took the class honours in his new Starlet from Ballymoney’s Derek Brogan in his Zetec powered Fiesta.

Class 9 Sports Libre: This really was a radical class! Gerard O’Connell took sixth overall as well as setting the fastest recorded speed through the speed traps, doing 115mph in his Radical SR8, on his way to taking the class win from Lee Kirkwood in his smaller Radical SR3. Lee finished a very credible eighth overall in what is only his second sprint in his new car. With some more seat time, Lee is guaranteed to only get faster.

Class 10 Sports Libre Rally Cars up to 1650cc Multivalve and 2100cc 8v 2WD: Alan Cassells continued to dominate this class in his little 106, taking the win from Alan Roddy in his Saxo and Joel Eakin in his 106. This was Joel’s first sprint.

Class 12 All other 4WD Sports Libre cars: After an unfortunate incident last weekend at Spamount Hillclimb, Oliver bounced back to take the class win in his blue Evo rally car in what was another quality over quantity class. Oliver’s unique flat out driving style was great to watch as he threw the Evo about like it was a go kart!

Class 13 Racing cars complying with Formula VW or Club Formula Ford: In a class which is usually dominated by ANICC Chairman Henry Campbell, the Todd family came out to take the challenge to Henry. Father Mike Todd took the class win from Campbell by 0.81 seconds with Mike Todd’s son, Nick, a further 2.86 seconds down the road in third. It was good to see the return of Ian Maple and Paul Mongan after the winter rebuild of Ian’s Mondiale turned out to have a spring completion date.

Class 14 Racing Cars up to 200cc 8 valve or 1400cc Multivalve: This little pocket rocket class finished up with George Stevenson taking the spoils in his immaculate little Jedi from Thomas Corey’s OMS Hornet and Lewis Wilson took third a mere 1.68 seconds behind George Stevenson. The battle of the Buchanans finished in son Paul’s favour with his father Alwyn finishing fifth. Unfortunately, an engine issue meant that the father and son pairing failed to complete their full quota if runs.

Class 15 All Other Race Cars: Adrian Pollock took the overall win as well as the class 15 spoils from John Morgan and Steven Gault. Barry Morris swapped his beautiful Mk2 Escort for his Swallow DR14 single seater for the day but unfortunately clutch issues during first practice meant that Barry was unable to show the full capacity of himself in the car. Rest assured that when he resolves the problems, Barry will be able to take the fight to the class leaders.

Class 16a Road-going Historic Saloons and Sportscars: No one seemed to tell Class winner Gerry McGarrity that he was the only entry in class 16a. Gerry, in his usual style, drove the little Mini like he had stolen it and wrung every tenth of a second out of it as he lapped the circuit on road tyres. His commitment was a pleasure to watch, if a little ‘hairy’ on occasions!

Class 16b Non Road-going Historic Saloons and Sportscars: It was great to see Iain Morgan return with his lovely MkI Escort. He pushed hard to take the win by 1.11 from Arthur Ovens in his lightweight Midget. Hopefully Iain wont leave it so long until he returns again.