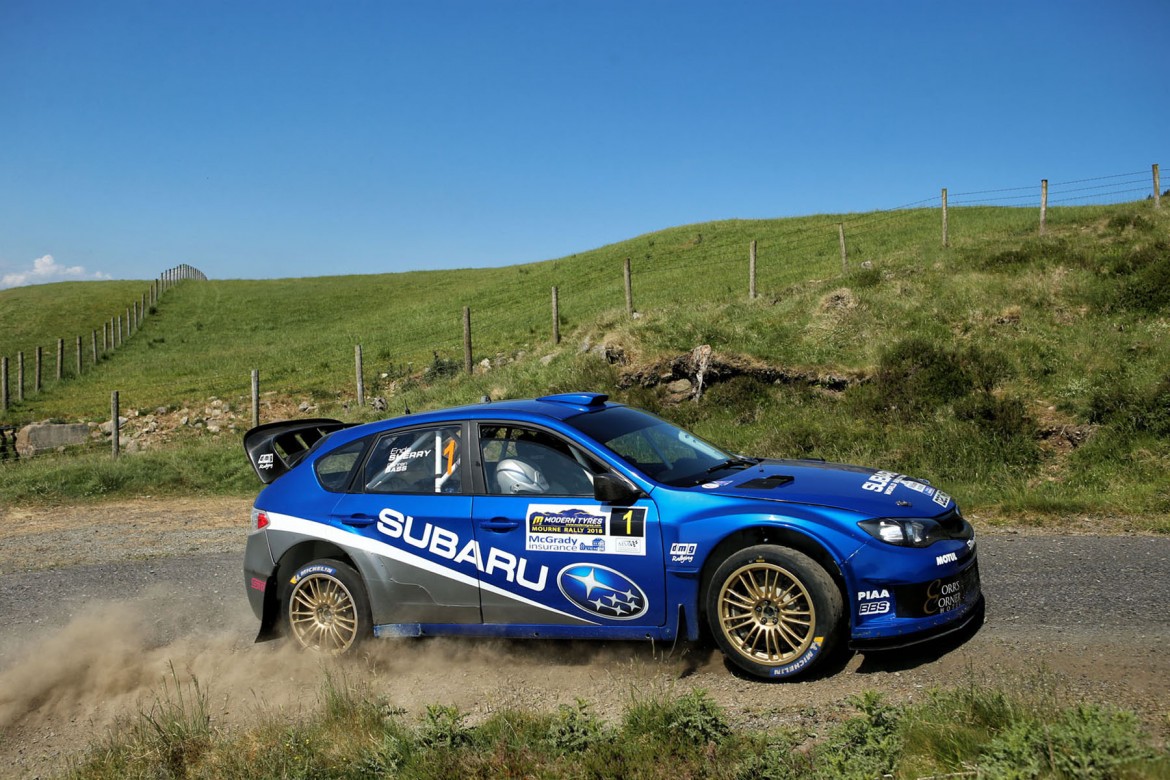 The Subaru Impreza WRC mounted crew led the Newry & District Motor Club event from start to finish, eventually winning by more than one minute. As the only World Rally Car powered crew entered in the rally, McGarrity had little comparable opposition but the tricky Gullion stages still proved to be a demanding test of man and machine.

“Our plan today was to get points, stay out of trouble, not mark the car, and that’s exactly what we did,” McGarrity said at the Mourne Country Hotel finish. “It would have been nice to have had a bit more competition. The guys in the Escorts drive very fast but it’s not ideal to race them with a World Rally Car. But we had a job to do and that’s what we did.”

Coming home in second position, Damian Toner and Denver Rafferty sealed the top two-wheel-drive award in the process. In the end, they enjoyed a fairly comfortable advantage over the rest of the pack after a trouble-free day rallying through some scenic stages.

“They were tricky stages,” Toner admitted, “but we had great weather and we really enjoyed it. It was a very good day and we’re happy to be top two-wheel-drive.” The battle for third overall between David Armstrong and Camillus Bradley went right down to the wire. Bradley lost time early in the event when a pipe came adrift on the second stage, leaving him with a worryingly noisy engine but, more importantly, he was down on power too. Initially, he believed his manifold had broken but it transpired to be a problem that he was able to fix in service.

“It happened at the first corner of stage two,” he explained. “I thought the engine had blown. She just lost power and I slowed down. When we got to service, we discovered we had lost a spring and a pipe had completely come adrift so it was an easy enough fix.”

Bradley spent the remainder of the event reeling in his rival. Going into the final stage, 1.7 seconds separated the two contenders. Bradley pulled out all the stops and at the final time control, he had done enough to secure third overall by a mere one-tenth of a second!

“We were pushing as hard as we could over the last four stages,” Bradley admitted. “It was a great day’s racing. He knew I was coming after him and I knew I had to try to catch him!”

Despite losing out on the final stage, fourth placed David Armstrong and Paul Mulholland were still happy with the result.

“That was some driving by Camillus!” Armstrong conceded. “Unfortunately our anti-roll bar come off during the afternoon stages and she was a bit wobbly but I’m happy enough.” John Devlin and John McCarthy completed the top five and won class six after a superb drive in their Escort, while Paul Britton and John McElhinney secured sixth overall and won the Group N category in the process.

Laverty and navigator Emmett Sherry had to be content with second in Group N as well as seventh overall. It’s a great result, especially given it was Laverty’s first time at the Mourne Rally.

Plenty of crews had their fair share of drama during the day including Gary Rodgers and Brian Crawford, who were lucky to escape a big scare on stage two.

“Brian says he’s getting too old for this!” Rodgers laughed at the stage finish. “We had a big, big moment but we got away with it. There’s a bit in the middle of the stage with bad jumps. I went off at the same place before so we had ‘listen’ included in the pace notes but I didn’t listen!”

Others lucky to get away unscathed included Ian and Amanda Green in their little Peugeot 205 GTi who survived two massive moments on the same stage.

“We lost it over a jump both times,” Green said. “When you’re going backwards in fourth gear – twice – and you get away with it, you know you’re lucky!” Steven Armstrong had a gear display problem throughout the rally but he still managed to finish 13th overall. Brian McFall clipped some rocks early in the event and although he got away with some minor superficial damage, he later lost time with a puncture which he had to change at the end of stage seven. In the end, he finished 16th.

Sadly William Morgan didn’t get away with an off-road excursion. He was stuck in a ditch and although he was later able to drive out of the stage, he was out of the rally.

Daniel Hamill survived a big moment on stage one when the back of his Peugeot 106 was in a hedge but he wasn’t as lucky later in the day. His car was subsequently spotted on a trailer with some frontal damage.

Ryan O’Kane ended his rally stuck in a stage four ditch while Stephen Caldwell got away with a stage one incident when he hit a large rock, causing some superficial damage to his Corsa.

Stephen Smith was forced out with gearbox trouble, with Smith commenting that he “went from fourth gear to third and found nothing but a bag of bolts”. Jamie Grant was forced to retire his Starlet when a wire that was connected to its battery melted while Alan Nesbitt, who was as high as fifth overall, retired with mechanical problems at final service. Brian McFall / matthew McKenna change a puncture during the event

Kyle White was determined to get a finish after his round two accident and desperately needed to pick up some championship points aboard his Peugeot 208 R2. Unfortunately, it wasn’t to be. An errant sensor put him out of the rally near the start of stage four and although he was able to fix the problem, he was out of time.

The Carryduff Forklift Down Rally hosts round four of the McGrady Insurance backed N.I. Championship on 21 July. The event also hosts a round of the MSA Asphalt Championship and more than 130 entries have been received to date, including around 40 from overseas entrants. It’s going to be a highly competitive event! More details will be revealed in due course on www.nirallychampionship.com and facebook.com/nirallying. 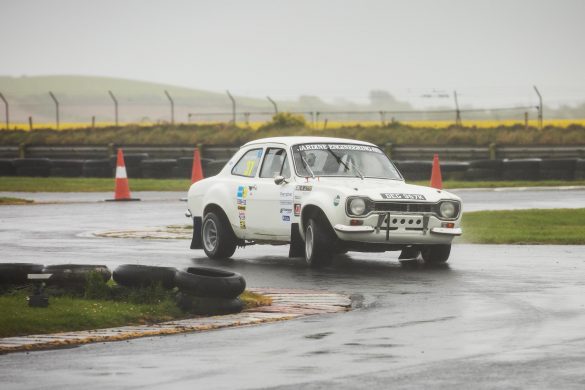