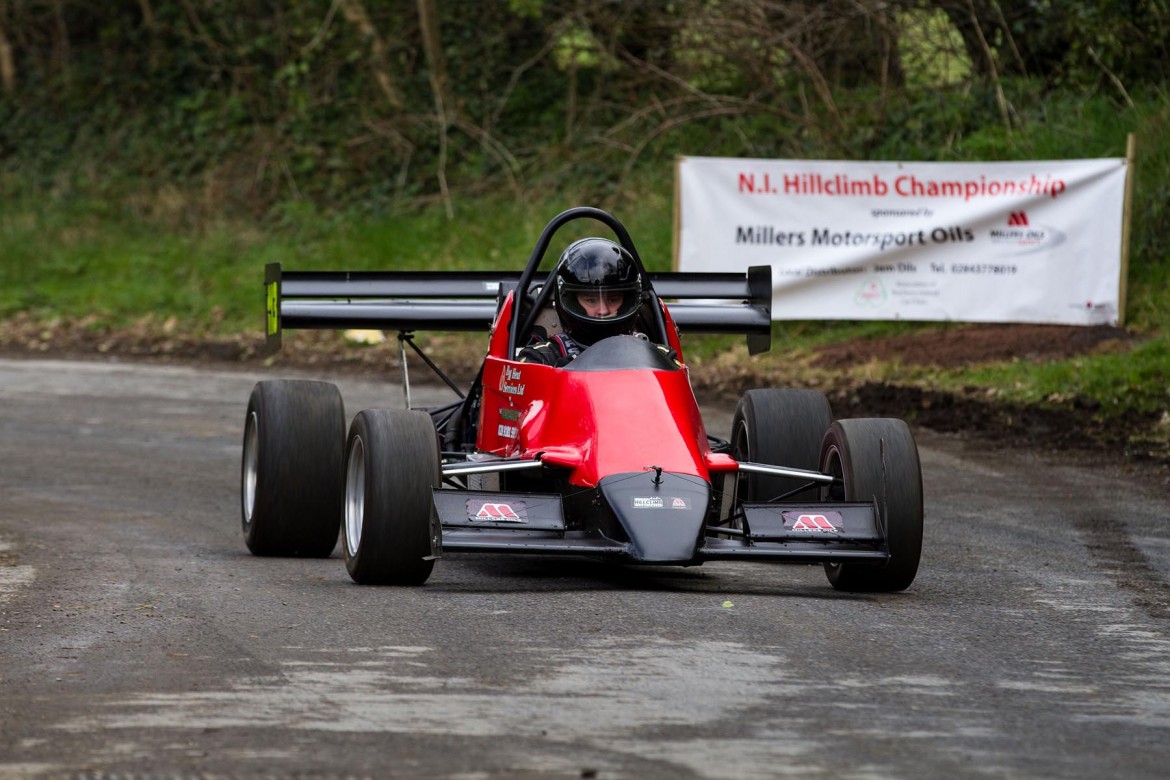 Last Thursday may have been the official launch of the hillclimb season but Saturday (14 April) was the day that the full entry list of eighty competitors had been eagerly waiting for – round one of the 2018 ANICC Miller Oils Northern Ireland Hillclimb Championship.

With that mouthful out of the way, it was ‘Croft’ hillclimb, just off Whinney Hill in Holywood, hosted by the Thoroughbred Sports Car Club of Northern Ireland, that was to see the thrills ans spills of action after a lengthy winter break.

Heavy fog in the early morning was reported by the few who arrived before seven writes Robbie Davison, to pick their favourite parking place. The fog soon cleared, however the sun never really appeared but it remained cool and dry all day.

Construction traffic on the hill had left mud and debris liberally scattered in several places. Excellent work by the volunteers from the TSCC NI helped clean the road, brushing it several times, it did remain slippery for a while but slowly dried throughout the morning. Single seat race cars had a difficult day. Graham Thompson, our previous seven-time champion, made a welcome reappearance but managed only one timed run but a run good enough to give him second in class.

Current champion Chris Huston was plagued by a constant misfire which saw him finish a disappointing fourth in class while Robert McGimpsey in his newly acquired car complained of tyre problems, stating “ it handles like a MkII [escort], great fun, but doesn’t make for good times” He still managed a very creditable third in class.

McGimpsey the younger – aka Ricky, featured in our opening picture – took fastest time of the day, a mere 35.5 sec, despite his share of troubles, having transmission problems. He paid tribute to the repair skills of his father in his speech.

Class 15 saw John Donnelly have an unusual minor off. However special congratulations must go to the softly spoken Brendan Flynn who stepped up to the mark with his first win in class 15. With a time of 36.75 and a hugely impressive fourth overall. Roger Gage was top saloon finisher with a cheeky fifth place overall in and among the race cars but another great battle was acted out in the 16 strong class 2.  Ford MkII Escort, Lotus, Turbo Renault, M3 BMW, V8 Rover to name but a few, providing a great selection of cars.

Competition was fierce with Michael Clarke’s nimble little Lotus taking the honours with David Gibson in a close second place. David was delighted with his car after a comprehensive upgrade over winter and promises more to come. Adrian Mulholland fought hard for a well deserved third place.

On a more personal note, my pwn class, 16a, was well supported with nine entries. Gerry McGarrity was uncatchable in his marvellous green Cooper S, though I tried my best and very happy in second with Ian Paget in another Mini making up the top three.

The same story was told all through the different classes, close competition, urgent repairs, lots of chat and great fun on what was a great day. A few minor incidents, thankfully everyone went home safe and sound. Thanks to TSCC NI for their superbly run event, thanks to the Marshals and all crews in attendance – see you at Drumhorc. Leslie Murray took the Class 17 win in this BUGATTI T35B

Words: Robbie Davison  #73 | Photos: Graham Curry – Click here to see a full gallery of images from the day…
[images must not be used in any way without prior written consent of the photographer]