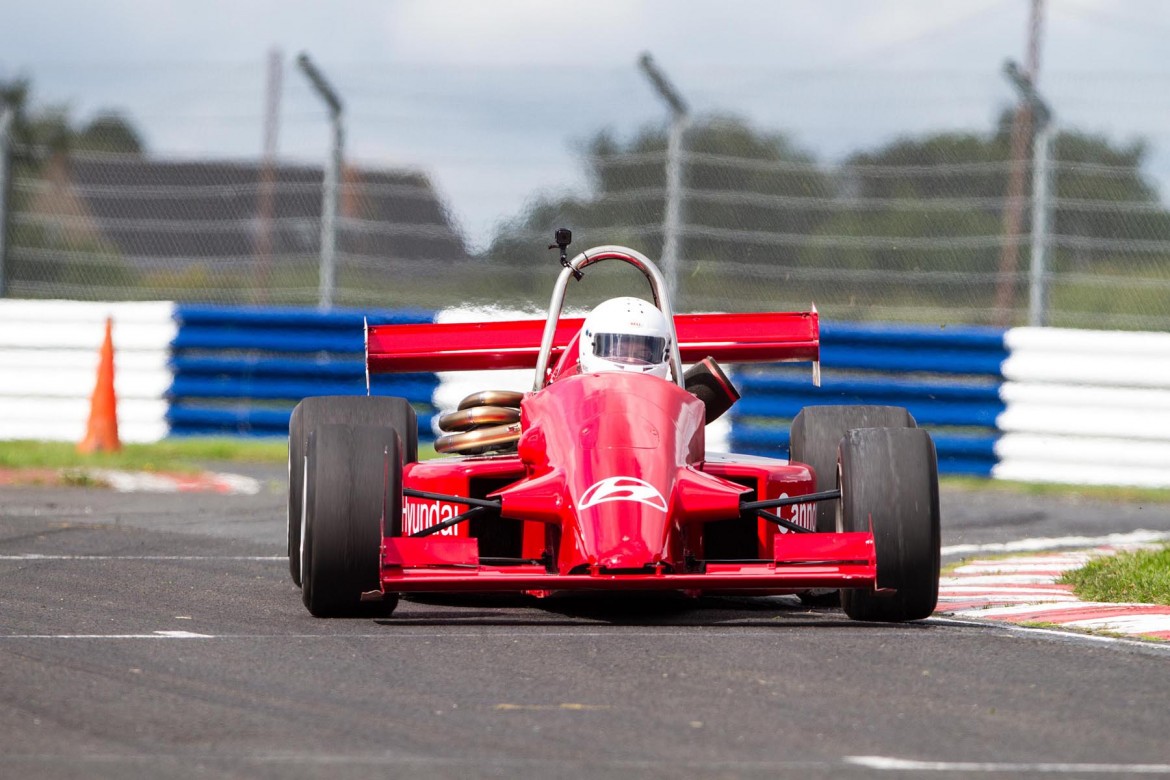 Saturday 04 August saw the fifth Round of the SW Adair Tyres Northern Ireland Sprint Championship, at an unusually sunny Kirkistown Racing Circuit in Co. Down and records got smashed all day.

Coming into the event, Adrian Pollock held a 2 point lead over John Morgan and it was business as usual writes David Evans, with Adrian and John fighting tooth and nail for the win, it was all to play for.

Johns fastest speed trap was a 147mph on his first run and Adrian had a very nimble 129mph also on his first run but it was John who was to stand at the top of the rostrum with a time of 109.69 sec whilst Adrian managed a 110.57 sec, it’s safe to say there wasn’t much in it!

Third overall went to Gerard O’Connell in his amazing radical – Gerards fastest speed trap was also on his first run, when he topped 143mph, his fastest run of the day got him down to an 111.6 sec run, a mere 1.91 sec off John Morgans time, and 1.03 sec off second placed Adrian Pollock. Gerard set a new class record and is determined to keep Adrian and John on their toes for the remainder of the season!

In the Road-going category, Bangor man Chris Rogan took the honours in his Renault Megane from Stephen Donnelly in  his Renault Clio, while Michael Clarke was third in his Lotus Elise.

The modified saloons Category was won by Ivan MCCullough in his Nissan GTR from Oliver Cormican in his Mitsubishi Evo with Alan Cassels finishing third and managing a staggering 30th overall in his little 1.6 Peugeot 106 – a great achievement from 90 starters.

In terms of the classes, the action was very hot across them all and some great class battles developed during the event.

In class 1, Killyleagh man Gary McClurg maintained his 100% win record in his Citroen AX, taking a comfortable win from Denis Watson in his Citroen Saxo and James Schofield in his Honda Civic. This was James’s first sprint, so well done to him for a third place on his first outing. McClurg set a new class record beating his previous record by 3.27 seconds.

The larger engined road-going boys in class 2, spent all day chasing Chris Rogan who lead the class all day in his Renault Megane, Chris also managed to beat the existing class record by a phenomenal 4.28 seconds. Stephen Donnelly was second in class from Michael Clarke. The top 3 in this class all finished under the previous class record, and fourth to seventh places inclusive, were separated by a mere 1.57 seconds so this shows just how competitive this class is. James Perry took his Caterham Superlight to the Class 5 honours in the specialist production class from Derek Millar in his RAM Cobra with only 0.57 seconds separating them at the end of the day. Derek had actually lead the class all day only for James Perry to put in a stonker of a last run to seize the win from under Derek’s nose.

A similar situation happened in class 6a, 8valve Modified production, where David Evans took the win in his 205 from Gary Milligan in the mini and Norman Harvey piloted his Escort to third. Gary had lead the class all day and there was never more than 0.19 sec between the top pair, that was until David pulled a blinder of a last run to take the class win by 1.1 sec from Gary and set a new class record at the same time.

Both drivers reported having ” hairy moments” during their last runs. This is a complete role reversal from the last round where Gary snatched the class win from David on his last run.

Class 6b, 16v Modified Production cars, was won by Portaferry man Brian Fitzmaurice in his Honda Civic, with Colin Dines second and Graham Dines third in the renault Clio they share. There were four Clios out in this five-car class and these little pocket rockets are proving to be a very popular and successful car to have.

Brian also celebrated his 40th birthday on Saturday so many happy returns Brian. Clive Latimer in his Sylva Riot…

Clive Latimer took the honours in class 7, Modified Specialist Production Cars, in his Sylva Riot – or “the flying snotter” as it has now been christened.

Clive also skimmed 1.78 seconds off the class record as well while Graham Boyce was a very close 2nd, only 2.27 seconds behind Clive with Tom Devaney third. Sadly Steven Hawthorne had a suspension issue which sidelined him in practice, as Steven would definitely have been in the middle of that battle.

Kevin McNamee pipped Craig Boyce to fourth by a mere 0.14 seconds after a day long battle.

Class 8a was a lonely affair for Lewis Dunlop in his mini, but none the less he took the class win in his beautiful little mini. Lewis has now finally got to grips with this wee car and is improving every time he drives it.

Class 8b was also a lonely class for Gary Campbell who took a new class 8b record, and indeed also came under the class 8a record on his way to the class win.

Class 9, sports libre cars, saw some fabulous machinery doing battle on Saturday and it was Gerard O’Connell who took the class win and was 6th overall in his radical SR8. Second place went to Simon Bainbridge in his home built SBS Audi.

This fabulous car has been a regular contender at this event for many years and each year it has changed radically to make it even faster. Third went to Eamon Matheson Snr in his incredible little MM2 which he shared with his son Eamon Jnr.

Eamon Jnr finished 4.9 seconds down on his father in what was his first ever time driving the car, that in itself was no mean feat as the little car is an absolute weapon. Alan Cassels dominated the up to 1650cc libre rally car class 10, to take the win from local man Thomas Fitzmaurice in his Citroen C2. On his way to the class win Alan also set a new class record, 5.29 sec under the previous record. Alan also finished up as third fastest saloon overall.

Class 13, racing cars class, saw 3 immaculately prepared Mondialle 89s do battle, with Henry Campbell in his Reynard Ff89. Henry took the class win from Phillip Harris, with Ian Maple taking third. It was great to see Ian Maple and Paul Mongan finally get to the bottom of their continuing misfire and getting to enjoy this beautiful little car.

Class 14, for Racing cars up to 2l 8 valve or 1400 multi-valve, saw John Donnelly and Trevor Roberts fighting hard all day. Trevor is a well decorated and successful kart racer and this was his first ever time sitting in the Jedi, recently purchased by Trevor McIlroy.

John Donnellys experience saw him snatch the class from Trevor by a mere 0.06 seconds with George Stevenson third in his Jedi. Andrian Pollock gets a push to the start line…

Class 15, all other racing cars, is is the class for the big single seaters and it was great to see 15 cars in this class.

Here, John Morgan takes top points with Adrian Pollock second and Robert Morgan third meaning that in terms of the championship, that result puts John and Adrian joint top of the class championship, both with 18 points and both with 2 wins and 2 second places each.

In terms of the overall NI championship, by my calculations, this result means that Adrian is still in overall control at the top, but now has only a 1 point lead over John Morgan – I have a really strong suspicion that this years championship will go down to the last run , of the last event of the year.

Class 16a honours for Road going Historic Saloons, went to Karl Johnston in the little Mini Midas, with Simon Brien second and John Golden third. Sadly Gerry McGarrity, failed to complete a timed run after have some mechanical woes. This was a shame as I for one was looking forward to watching Gerry throw the little mini round the chicane on the front straight – unfortunately it wasn’t to be.

Tony McLaughlin took the honours in the non road-going historic saloons class – class 16b, in his lovely mark 1 escort. Tony was another driver who had a lonely, but still enjoyable run none the less to the class win.

The next round of the SW Adair Tyres Northern Ireland Sprint championship will take place at Kirkistown, Co. Down on 08 September when Larne Motorclub host the round. LMC are well known for running a superb event and they always manage to get a good following of rally men who come out to play.

Words: David Evans – #154 | Photos: Graham Baalham-Curry
[images must not be used in any way without prior written consent of the photographer]