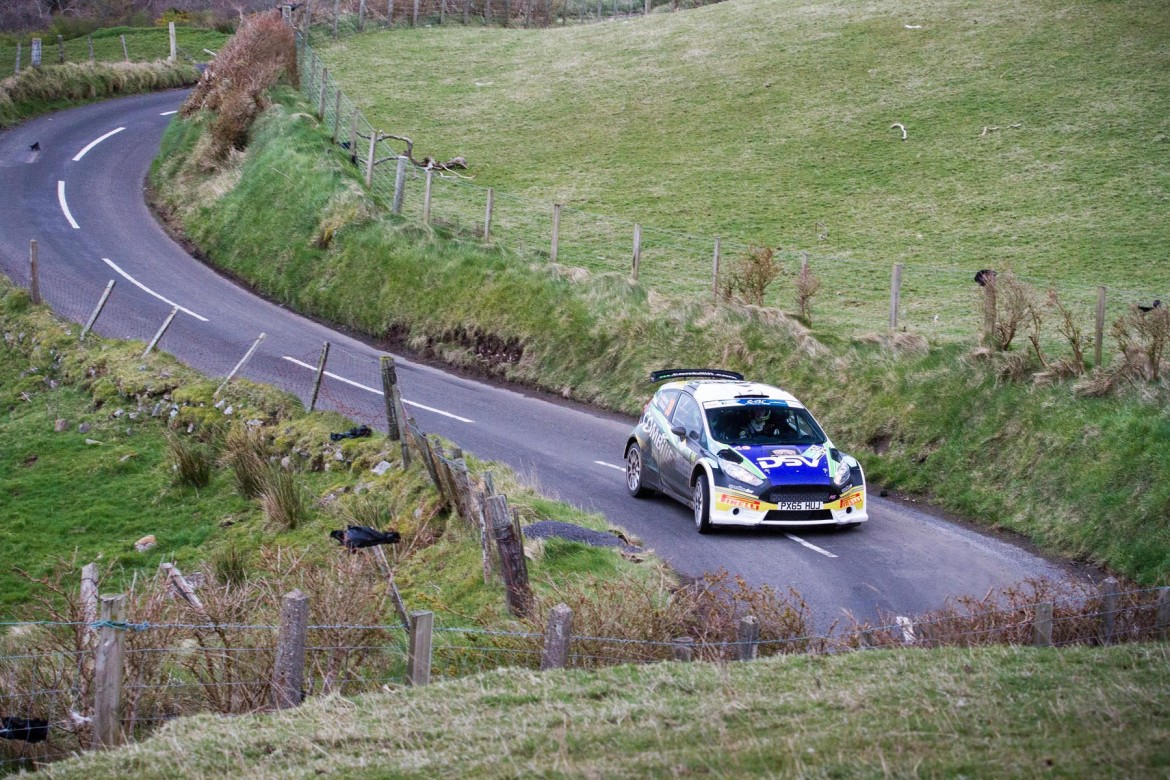 Irishman Josh Moffett and co-driver John Rowan won the second round of the MSA British Rally Championship today (April 8), after a weekend of attrition on the famous Circuit of Ireland. No fewer than four drivers held the lead during the two-day event, but the 23-year-old mastered the Belfast-based event in his Ford Fiesta R5 to claim a 27 second margin over Jonathan Greer and Kirsty Riddick in their Citroen DS3 R5. David Bogie and Kevin Rae made it three marques in the top three as they rounded out a Pirelli podium clean sweep in their Skoda Fabia R5.

The event started on Thursday evening where the cars and stars descended upon Lisburn city centre for a spectacular Ceremonial Start. Thousands of spectators lined the streets to see the crews cross the start ramp in front of the Irish Linen Museum. Louis Walsh of X-Factor fame and Lisburn and Castlereagh City Council Mayor, Councillor Thomas Beckett helped flag away the cars into the two-day event. Jonny Greer in his DS3 R5

The first day was to be a real challenge for the BRC crews, as treacherous stages and road conditions provided a real test. First on the road were championship leaders Elfyn Evans and Craig Parry, fresh from their opening round success in Mid Wales.

The pair drew first blood on the opening stage, leading the event by six seconds before doubling their advantage on the second. Drama and retirement was to follow on stage three as the auxiliary belt let go on the DMACK Ford Fiesta R5. Restarting under super rally rules, the WRC stars showed their class with four fastest overall stage times on Saturday before retiring again, this time after an accident. Elfyn Evans with his stricken Fiesta on Torr Head

Stepping into the breech was Marty McCormack (Skoda Fabia S2000) and Fredrik Ahlin (Fiesta R5). The pair had a ding-dong battle throughout Friday afternoon’s stages with the Swede ahead of the Northern Irishman by a mere 2.6 seconds going into the final stage of the day. The 2.3 kilometre town centre stage was to provide a heart-stopping moment for the Ahlin as he made contact with a roadside kerb, damaging the rear left suspension.

Amazingly, after effecting temporary repairs by the roadside he and co-driver Morten Erik Abrahamsen only lost 23 seconds and limped the car back to the overnight halt in order to continue on Saturday. Unfortunately for the Scandinavian pair a crash on the following day put an end to their challenge. The Circuit of Ireland showed its reputation as one of the most prestigious yet difficult rallying events in the world, as crew after crew fell by the wayside. Leading the field away on the second day, McCormack knew his S2000 spec Skoda would be challenged by the newer R5 cars, especially in the drying conditions, while Josh Moffett began to capitalise on Ahlin’s misfortunes.

Moffett gained time on the opening two stages before leader McCormack came to a grinding halt with a fuel pump issue which brought a premature end to his weekend. Further drama was seen on the same stage as Sam Moffett lost his Fiesta R5 under braking for a tight left-hander, crashing into the undergrowth and out of fourth place. As the final loop began, Josh Moffett continued his inspired form and established a comfortable gap ahead of Johnny Greer, who had enjoyed an uneventful rally, staying clear of trouble to take a first BRC podium finish since 2012.

David Bogie and Kevin Rae almost didn’t make the event after an accident in Thursday’s practice caused substantial damage to the car’s radiator, but after the CA1 Sport team got them back into the event, the Scottish driver rewarded their efforts with an incident-filled third overall.

Tom Cave over came gear box gremlins in his Fiesta R5 to chalk up a solid fourth place while Jamie Anderson, who had never competed in a Tarmac event before, put in a fine drive to round out the top five in a similar Fiesta R5. David Bogie takes a cut on the Hamilton’s Folly stage

The DMACK Junior BRC series was to follow the BRC1 formula, as survival was the number one priority for a good finish. From the off, local man Robert Duggan in his Vauxhall ADAM R2 took the early advantage. He wasn’t to have it all his own way, however, as Mattias Adielsson was on his coat tails throughout. The team mates traded fastest times all weekend, the Swedish hotshot taking six class stage victories but ultimately succumbed to the raw pace of Duggan who came home with a 27.7 second victory.

No less than six drivers occupied third in the BRC Junior class over the course of the two-day event, the third and final spot on the podium finally going to Adam Bustard, who had a nightmare of an event. The Northern Irishman broke a driveshaft on the opening test and had to run under super rally rules the following day. Bustard plugged away and managed to pass Nabila Tejpar on the final stage of the event. Adam had also played his ‘Joker’ which doubled his points, bringing him back into the title chase. Aron Windrus was the final finisher on the event and he too had to restart the second day after engine gremlins. In BRC2, young Patrick O’Brien kept a level head and built his confidence throughout the event to claim the victory on the classic Tarmac test. Mid Wales Stages winner, Matt Edwards had fuel pump issues before the start while Roland Llewellin broke a driveshaft just metres into the opening timed test. Both restarted the event and have scored valuable points towards their title challenges. BRC4 Mid Wales Stages winner Tony Simpson was not present on the Circuit so a new winner would be crowned on the Emerald Isle. Callum Devine in an Opel Adam R2 led the charge initially but had to settle for second behind Marty Gallagher in a Ford Fiesta R2. Callum Devine on his way to a class win

In the BRC National Rally Cup Donnie Macdonald won the class and walks away with 50 points having played his ‘Joker’. The Scottish driver now leads the Championship heading to the Pirelli Carlisle Rally later this month. Donnie Macdonald on The Glens stage

The MSA British Rally Championship (BRC) will return to terrestrial TV screens this year after concluding a deal with Channel 4 and BT Sport to cover the seven-round series. The country’s premier rally championship will have round two highlights on Channel 4 this Saturday and the following Wednesday on BT Sport.

The next round of the championship will see the crews travel to Cumbria for the Pirelli Carlisle Rally, which takes in the infamous Kielder forest (30 April /1 May).

[…] Circuit was also a counting round of the ERC and BRC so the competition was always going to be fierce, and so it proved to be. With Craig Breen looking […]

Reply
NOTHING STOOD IN THE WAY OF MCCGARRITY ON HIS WAY TO WINNING THE NIRC SECTION OF THE CIRCUIT | Used Cars NI Blog April 12, 2016 at 12:51 pm

[…] some revered stages such as Glendun, Torr Head and Hamiltons Folly and was running behind the ERC, BRC & ITRC. It provided a stern test for the N.I Championship runners, including the […]