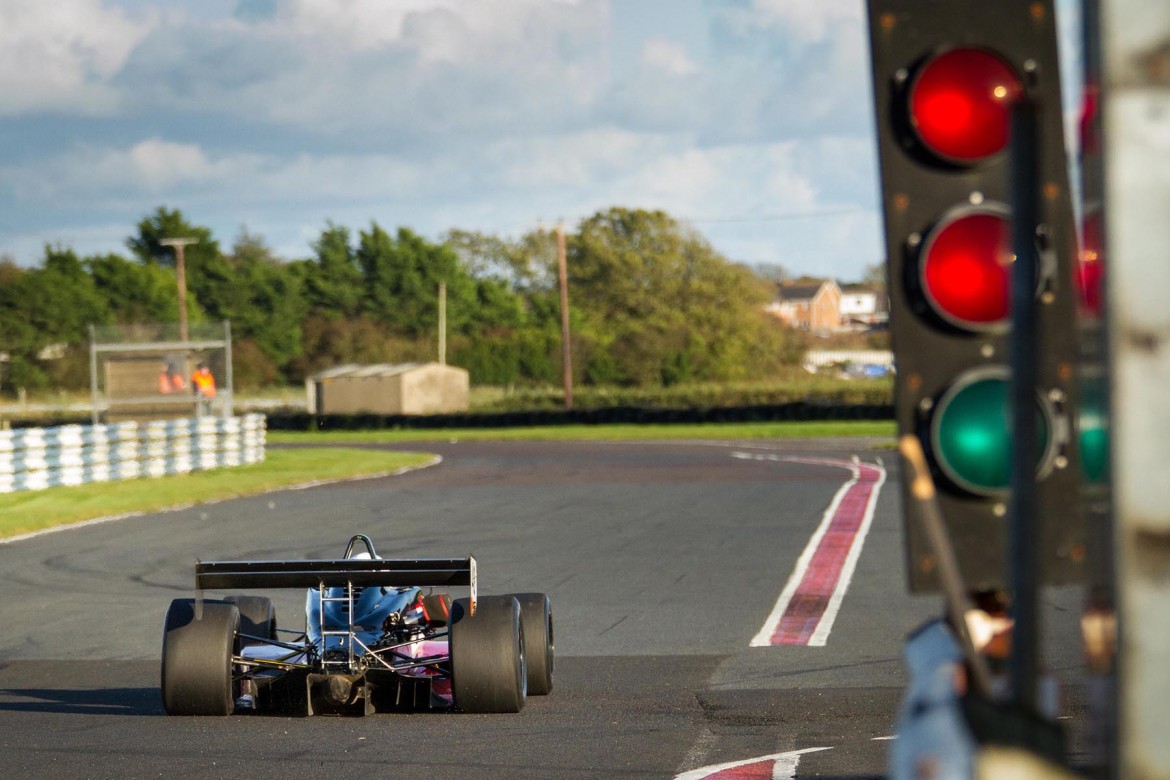 After what has seemed like a long season, the final round of the SW Adair Tyres Northern Ireland Sprint Championship took place on Saturday 26 October at a cold but dry Kirkistown Race Circuit, with the 500MRCI Halloween Sprint.

Thankfully the Championship`s very own weather man’s predictions were 100% perfect as the day was dry, windy but cold.

With 66 competitors, including 10 from the Irish Hillclimb Championship, and a few other non-regular competitors beginning their timed runs on the long national circuit, the action commenced around 10am with 2 practice runs, with 3 timed runs completed for 16:30, despite a couple of hold ups during the day.

As always, the circuit action was frantic and this was especially evident in class 6a, where as usual the competition mid-field is notable. This Saturday was no different, and after the first timed run there was a mere 0.34 secs between third placed Karl Johnston and fifth placed Gary Milligan. 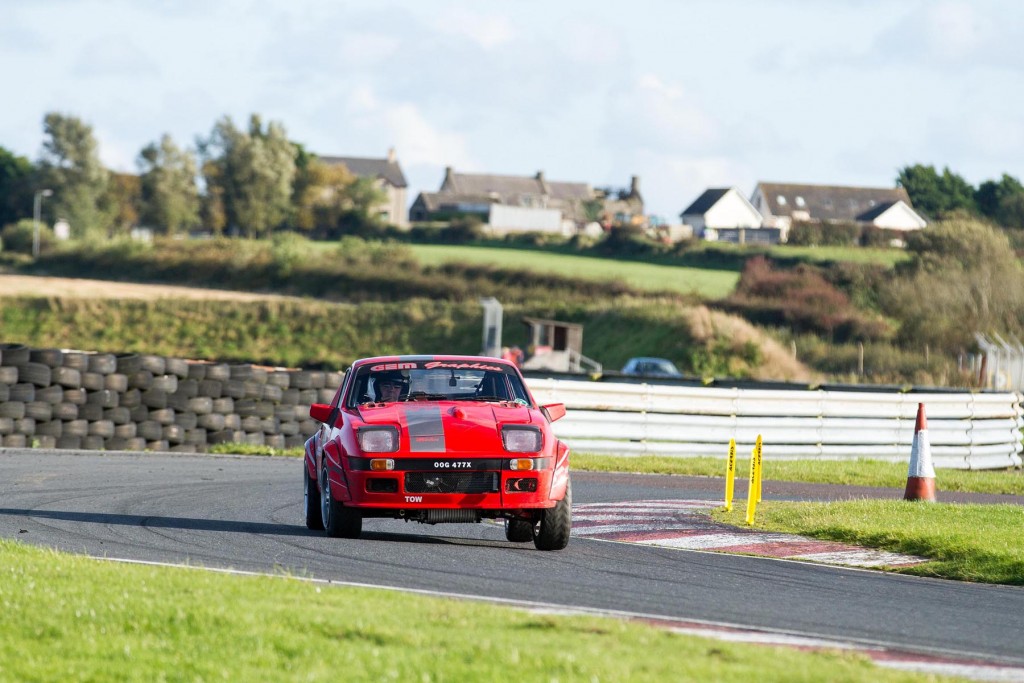 Gary was only 0.03 secs behind fourth placed David Evans. In the second runs the trio went faster again and the gap between third and fifth increased to 0.37 secs, Still in Karl Johnston’s favour, but with David Evans now a mere 0.08 seconds behind Karl and Gary a mere 0.29 behind David.

David went early for his third run as he tried to eek an advantage over the 2 mini men and he went 1.09 secs faster, despite his father’s request for him to brake a bit earlier into the back kart chicane as it was bad for his nerves, as David tried to see just how good his 4 pot Brakes were.

David managed to find another 1.09 secs on the brakes and jumped to third in the class.

Having done all he could, David watched as Gary Milligan and then Karl Johnston tried their best to beat David’s benchmark.  Gary Milligan dropped to a 148.92 which saw him finish a mere 1.33 secs behind David then all attention focused on Karl Johnston as he headed off in his Midas. 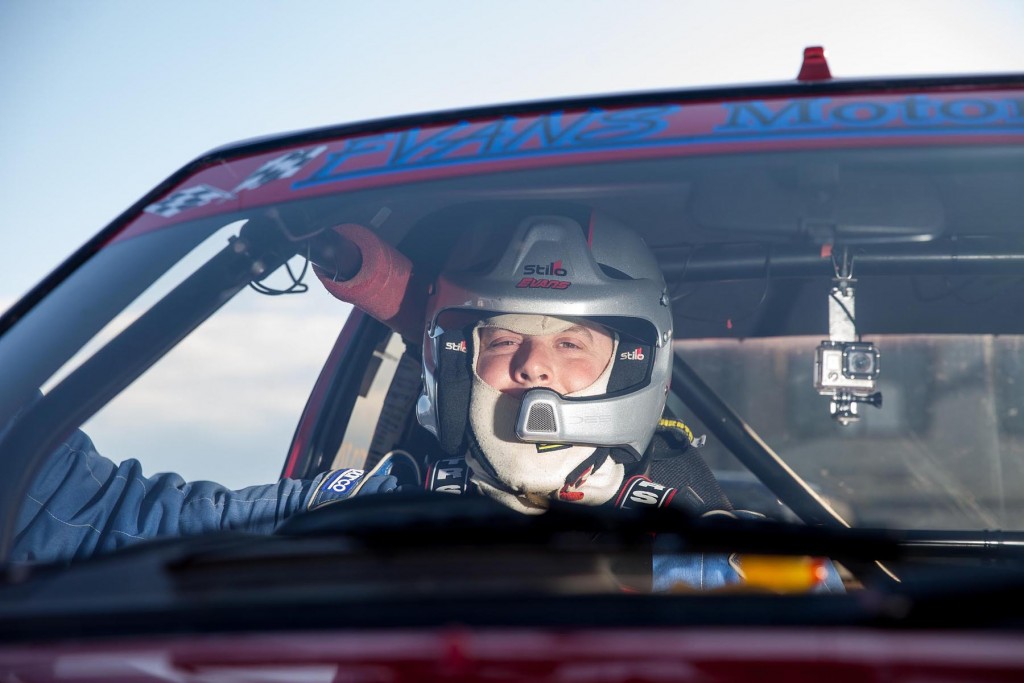 Karl drove a blinder of a run and pipped David to third by 0.4 secs with a fastest run of 147.10. This was despite Karl having a moment or 2 on his last run. His on-board footage can be seen on the Sprint Facebook page.

I`ve only mentioned the battle for third to fifth in 6a because separately there was a huge family and championship battle ongoing at the front of 6a, 6 seconds or so ahead of the remainder of the class. David Strain who has dominated the class all season was coming under intense pressure from his nephew Jonathan Strain in his 205gti.

A mechanical issue meant that David missed his first timed run and with Jonathan having fuel issues all day it came down to the last run where David Strain went fastest in class by 1.22 secs only to watch Jonathan take a further 0.43 secs out of his uncle David to take the class win.

NOW…… Jonathan’s win meant that David and Jonathan were equal on points at the season end as Jonathan had to drop his lowest 3 point score. This created a class championship tie that was settled in David’s favour by means of count back, as David had 6 class wins as opposed to Jonathan’s 3 class wins.

That is a way to end a season!! 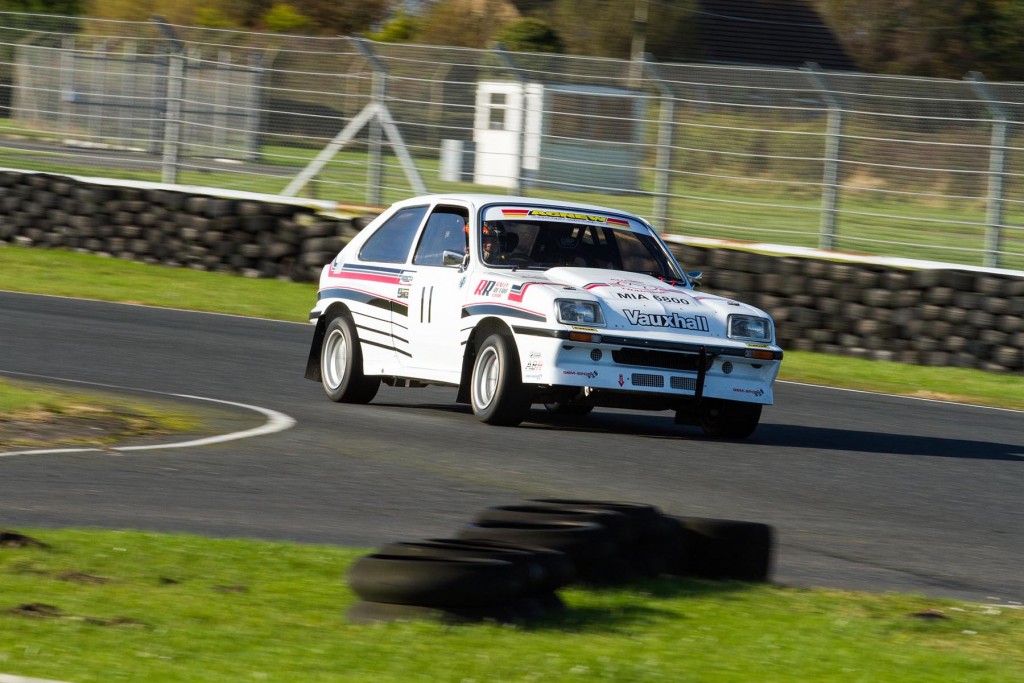 Some other great tussles took place in 6b when Andrew Straney and Rudy Tate brought Andrews Vauxhall Astra out for a run. Rudy, who had never driven front wheel drive was only 2.38 secs off Andrew at the end of the day and after his first run he was only a mere 0.51 secs off Andrews pace.

Andrew, who is consistently fast, managed to set identical times for his second and third runs. Yes I mean identical, the clocks showed 2 runs of 141.47 secs. When you consider that Rudy, on his first time out in the car managed to beat seasoned competitor and multiple sprint and Hill climb champion Ken Colbert in his Sunbeam by a mere 0.29 secs it goes to show just how well Rudy was driving. Well driven folks.

The biggest, and most anticipated battle of the day was at the top of the time sheets. With Joe Courtney out in his Peugeot Powered Reynard and Adrian Pollock in his Dallara, it was always going to be a battle Royale to take overall owners. Sadly Steven Gault chose not to compete at this round as it would have been a tremendous 3 way tussle. 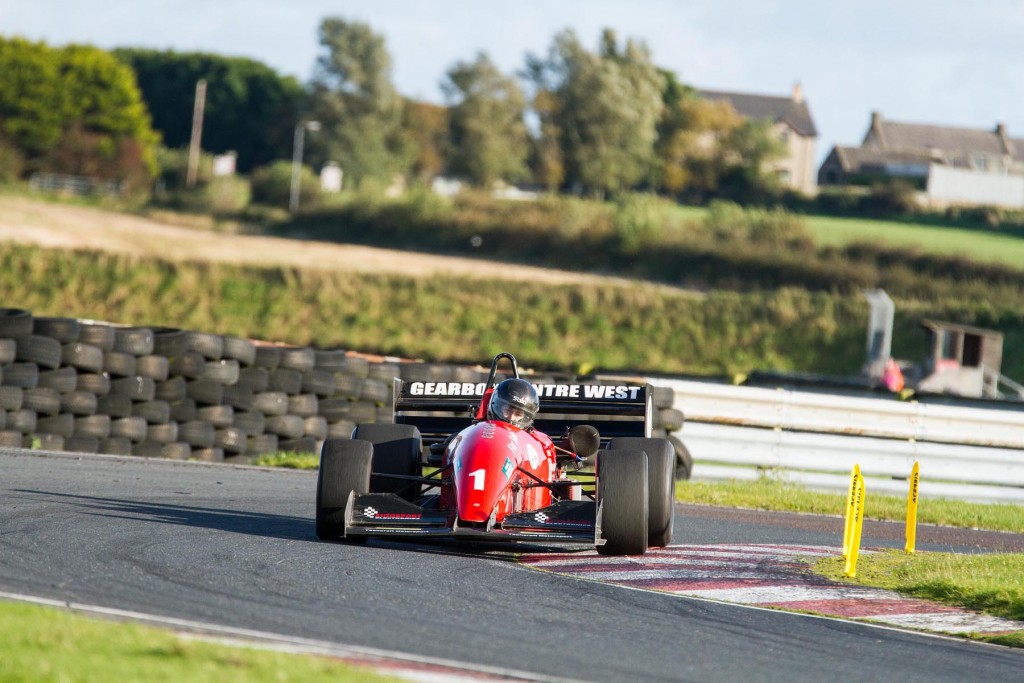 For the first run, Joe Courtney set the ball rolling with a clinker 112.30 secs run and Adrian drove outstandingly to set a 112.74 sec run which was only 0.44 behind Joe. With Adrian enjoying the close battle he rolled the dice for the second run and set a 112.00 sec run with what was, by that stage, a nearly non-existent clutch.

Joe accepted the challenge and fought back with a 110.89 sec run to remain at the top. As always, Adrian prepped the car for his third run, then he disappeared to do whatever Adrian does when he needs to find time.

Sadly another competitor had a gearbox issue mid-way through the third runs and lost the contents of his gearbox onto the track between colonial and Fisherman’s leaving a big oil line between the 2 corners. I went down to the chicane to spectate from there.

Joe Courtney’s third run was fabulous to watch but sadly he didn’t manage to better his second timed run however Adrian ignored the line of cement dust on the track and was unbelievable to watch through the chicane as he drove the wheels of his Dallara in pursuit of Joe. 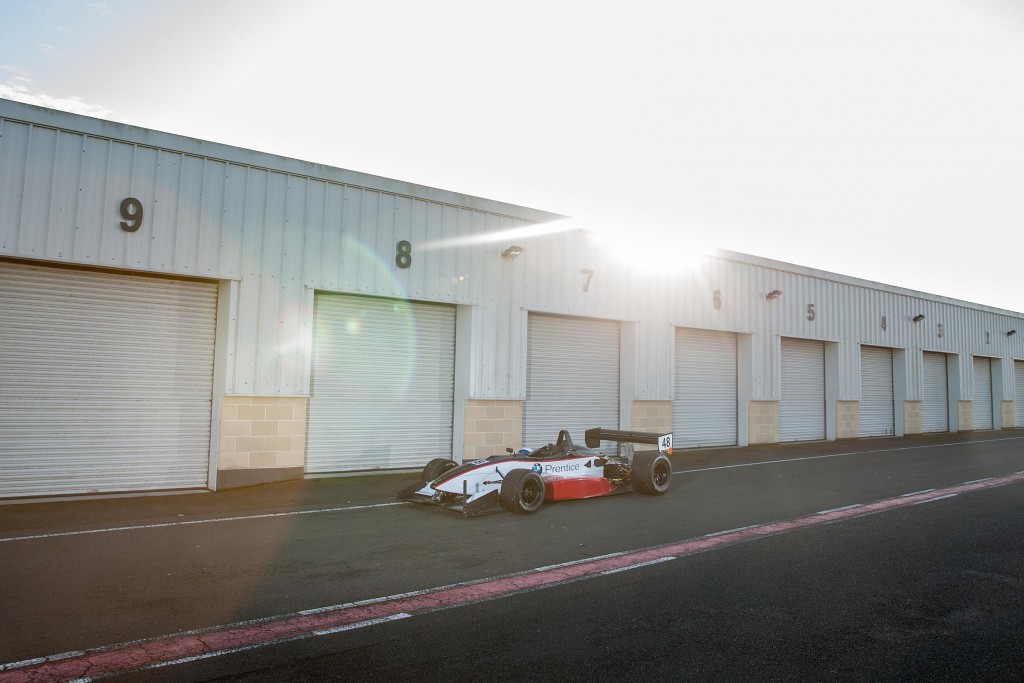 On his second lap through the chicane he was on the limit and obviously trying but unfortunately he just couldn’t pip Joes 110.89 sec target and Adrian finished second with a 111.51 sec run. No one can say he didn’t give it his all though. It’s also fair to point out that the pressure for the championship was well and truly off and that the win was purely for competition purposes.

Alan Cassels had a superb drive to finish third in his radical with his fastest run being his first run. Alans tyres clearly must have been done as he got slower as the day progressed, but Ryan McGimpsey had a mega drive to fourth in his little 1400cc Class 14 Jedi. Ryan’s fastest run of 118.90 was only 8.01 secs off the FTD which shows how hard he was pushing.

I watched Ryan through the main chicane and he was incredible to watch, and clearly isn’t aware of what the brake pedal is for as his approach and cornering speed was incredible.

Gerard O`Connell had received some “team orders” from team principal Lorraine that he had to leave early, which he duly complied with. However before going home early Gerard left his stamp on the day by setting a time of 125.27 secs which placed him 7th overall in his escort Mk1.

He also took class 9a honours and maximum points in the Modified category. Second modified saloon on the day was Martin Cairns who brought his fabulous 1600CC turbo WRC Fiesta to the sprint. 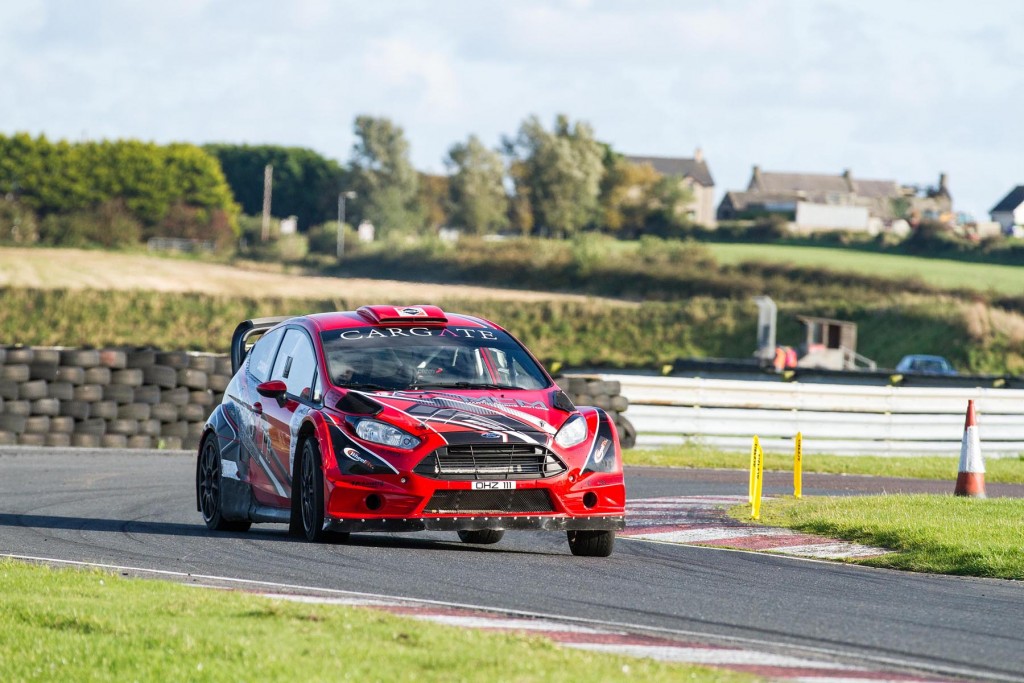 Martin finished 9th overall and 4.75 secs behind Gerard. Third in the modified saloon category battle went to David Hunter in his white Subaru Imprezza. It’s great to see the flying doc back out again after a long layoff. The flying doc finished a mere 0.07 secs ahead of David Frances in his escort.

In the road Going category Paul Montgomery was the fastest road car with 11th overall in his Imprezza. His fastest third run of130.32 saw him finish 8.32 secs ahead of Andrew Robb who steered his BMW M3 to eighteenth overall. Third in the road going category went to Stephen Robb who was also driving the family BMW for the day as their father Alfred Robb was sharing Stephens Clio with Andrew Robb in class 6b.

In the battle for Historic honours Gerry McGarrity took historic honours in his little green mini finishing in front of Vincent Rodgers with Mervyn Getty Third.

In the battle for the fastest mini in the west Karl Johnston again took the honours, and I believe the overall unofficial title of Fastest Mini In The West. Fair play Karl who has driven superbly all season, however having spoken to Gerry McGarrity, Gerry is still adamant that he’s the fastest mini man in the west as Karl’s isn’t a mini, it’s a Midas and Gary Milligan’s wheels are too big and therefore as the only proper mini with 10” wheels Gerry is the fastest. 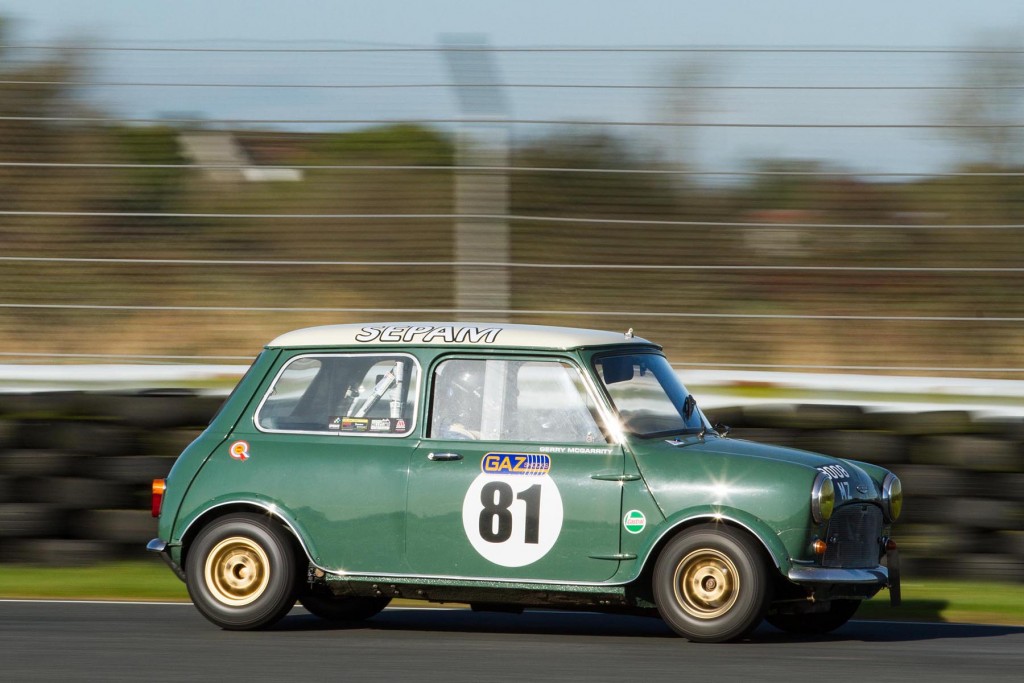 This is 1 dispute that I won’t be getting involved in.

Andrew Robb has secured the Roadgoing category in his BMW M3 from his father Alfred Robb in the BMW M3 they share. Tom Lawther finished third in the Road going section but didn’t marshal at an event so third place honours go to Aaron Vance in his Clio.

In the modified battle Oliver Cormican is the 2019 Modified Category winner in his Mitsubishi Evo from Gerard O`Connell in his Mark 1 Escort. David Strain who drove superbly all season and punched well above his weight takes third in the modified category in his Peugeot 205.

See you all again on 29 February 2020 at Nutts corner when the 2020 season recommences.

Words: DAVID EVANS #154 | Photos: Graham Baalham-Curry
[images must not be used in any way without prior written consent of the photographer]