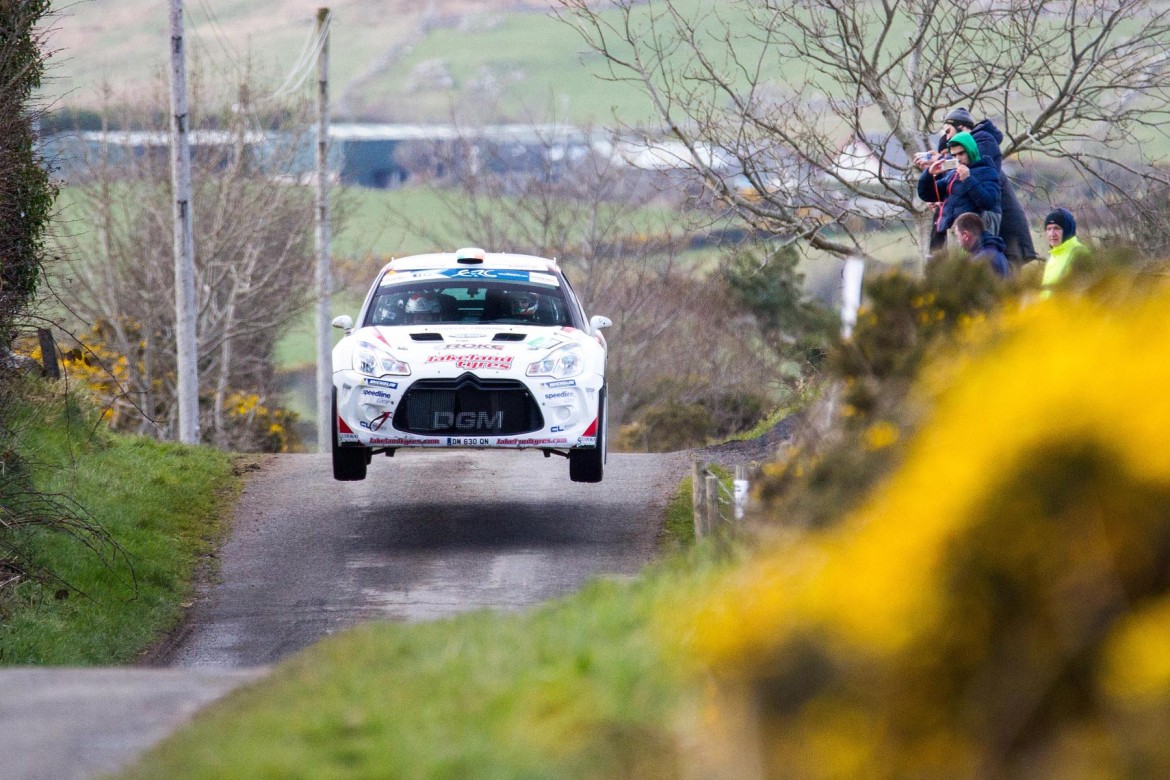 Craig Breen triumphed in a renewed rivalry with Kajetan Kajetanowicz to win the Circuit of Ireland for the second straight year upon his return to the FIA European Rally Championship.

Leading ever since a sublime drive on the longest stage of the rally on SS3, Breen had over half a minute in hand at service on Friday evening, but a spin on the subsequent Newtownards TT street stage was followed by further time losses at the start of leg two when the decision to run super-soft tyres left him unable to match the times of his 2015 ERC title rival Kajetanowicz. Kajetan Kajetanowicz on SS3 “The Glens”

On a charge, defending ERC champion Kajetanowicz had brought the gap down to just over 10 seconds by the mid-day service, and after a rock in the road damaged Breen’s left-rear tyre on SS12, there were a mere 5.2s between them with two stages to go. Breen responded perfectly however with a fastest time in the penultimate stage in his Citroën DS3 R5 on Michelin tyres, and finished up 10.6s clear.

The Irish driver, who achieved a childhood dream by winning the rally for the first time last year, said: “I have to thank everybody for making this possible. I felt it slipping from my grasp today, we really had to dig deep.” Winner of the 2016 ERC Circuit of Ireland Craig Breen

As in 2015, Kajetanowicz had to make do with second place behind Breen on the asphalt roads of Northern Ireland, but moves into the ERC standings lead in the absence of Alexey Lukyanuk. The Russian won the season-opening Rally Islas Canarias El Corte Inglés but was forced to miss the Circuit of Ireland because of a crash in pre-event testing.

Alastair Fisher made up for the disappointment of retirements on his last two Circuit of Ireland starts by completing the podium on an event his uncle Bertie won three times. With a quick and consistent performance, the Ford Fiesta R5 driver held third place after all but the second stage of the rally. Jaromír Tarabus was poised to begin his 2016 ERC campaign with a top-five finish, and was within five seconds of fourth-placed Josh Moffett going onto the final stage, but the ŠKODA Fabia R5 driver slid into a ditch on the last test. Others to lose strong positions on the second leg were Martin McCormack, who was fourth in his Super 2000-specification Fabia before a fuel pump failed, and Fredrik Åhlin, who shone on his first asphalt rally since 2012 until he broke his Fiesta R5’s steering.

Jonny Greer made the most of his local knowledge to stay out of trouble and finish fifth in his Citroën, a year after a fire robbed him of sixth place at the end of the final stage. David Bogie had a nightmare start to the event when a crash in Free Practice ruled him out of the Qualifying Stage, but he recovered well to finish sixth in his Fabia R5. Tom Cave had to put up with a gearbox problem for much of leg two but took eighth behind fellow Fiesta R5 driver Stephen Wright, while Joseph McGonigle got his Fabia S2000 home ninth in spite of back pain incurred in a heavy landing on a jump. As in the Canary Islands, Jarosław Kołtun produced a largely trouble-free run to make the top 10, benefitting when Robert Woodside crashed his similar Fiesta R5 on SS11. After a mechanical problem stopped him when leading early in the event, Elfyn Evans restarted for leg two and set four fastest times from five stages before hitting a wall on SS12 in his Fiesta R5.

Chuchała makes it two from two in ERC2
Wojciech Chuchała repeated his ERC2 victory from Rally Islas Canarias, and after a relatively steady start versus the R5 and Super 2000 cars due to making too soft a tyre choice in the dry opening stages of Friday, he began to make great progress towards the top 10. In the end, he fell 4.5s short of 10th place after a battle with fellow Polish driver Jarosław Kołtun, which ended the opposite way to their scrap over fifth on Gran Canaria. Subaru Poland Rally Team star Chuchała’s class-winning margin over rival Giacomo Scattolon was more than eight minutes, but Mitsubishi driver Scattolon could take heart from joining Chuchała in the overall top six on the SS6 street stage. Wojciech Chuchała cutting tight on the 31km The Glens stage

Pieniążek the ERC Junior winner on all-Opel podium
Opel drivers filled the top three places on the opening ERC Junior round of 2016, with the series running on Pirelli tyres for the first time, but privateer Łukasz Pieniążek was something of a surprise winner against his factory-entered rivals. The Polish driver was quickest in class on the first stage of the rally only to then slip back to fifth, before mounting a fightback that was complete when Marijan Griebel lost the lead to a puncture on SS8, the second stage of leg two. After struggling to find the limit of his new Adam R2 on leg one, Chris Ingram starred on leg two and finished just 11.5s behind Pieniążek in the end, despite losing more than that in SS12 alone through some understandable caution on snow. Griebel, who led most of leg one despite feeling a lack of drive from his Adam, lost the best part of a minute-and-a-half from his puncture, but drove “flat-out” thereafter and snatched third from Vasily Gryazin on the final stage. Just 16.5s behind Pieniążek in the end, the German was awarded the Colin McRae ERC Flat Out Trophy for his performances. His ADAC Opel Rallye Junior team-mate Julius Tannert restarted after his late off on Friday and even though he also punctured on SS8, he took sixth between ERC Junior newcomers Dominik Brož and Marco Cid. Német gets ahead among the non-Juniors in ERC3
After being forced to stop several times in SS3 due to an electrical problem, László Német set some good times in his Peugeot 208 R2 to finish up fifth in ERC3 and best of those not also competing in ERC Junior. Renato Pita completed his first event following his switch to a Ford Fiesta R2 in sixth, while Szabolcs Várkonyi was eighth. László Német over The Glens stage

[…] Circuit was also a counting round of the ERC and BRC so the competition was always going to be fierce, and so it proved to be. With Craig Breen […]

Reply
NOTHING STOOD IN THE WAY OF MCCGARRITY ON HIS WAY TO WINNING THE NIRC SECTION OF THE CIRCUIT | Used Cars NI Blog April 12, 2016 at 10:55 am

[…] some revered stages such as Glendun, Torr Head and Hamiltons Folly and was running behind the ERC, BRC & ITRC. It provided a stern test for the N.I Championship runners, including the […]