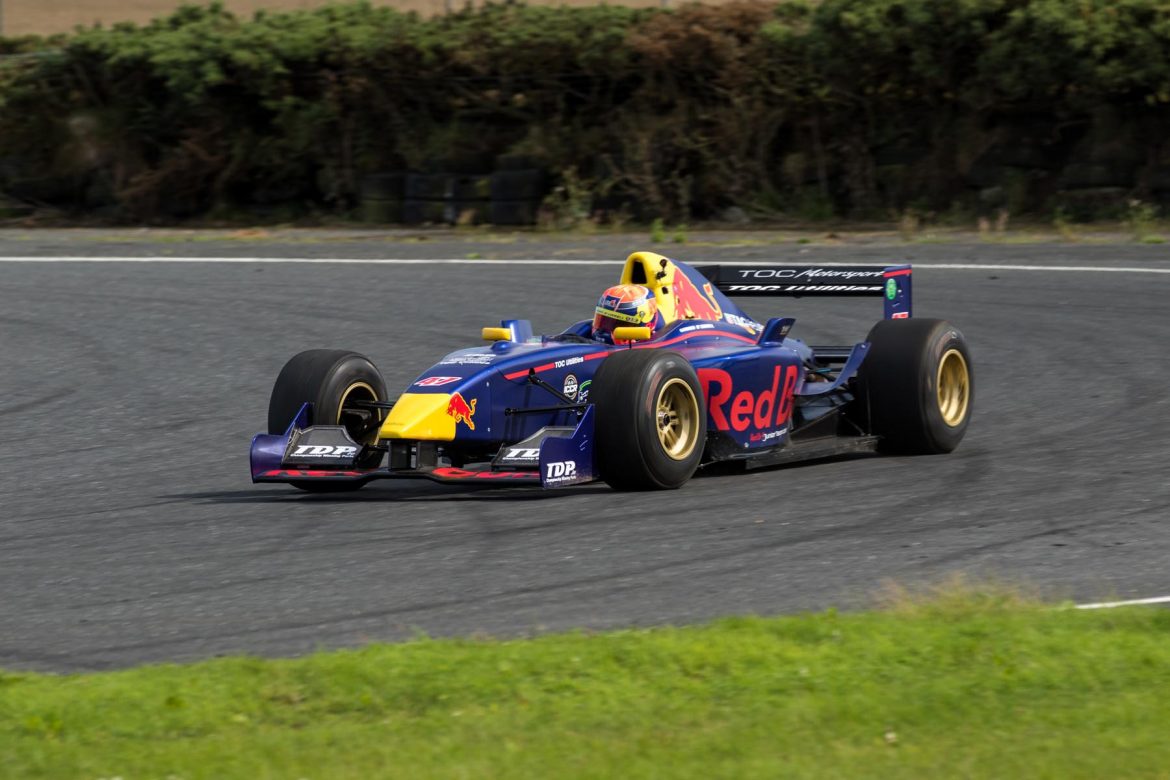 After a suspicious weather report the previous evening the SW Adair Tyres Northern Ireland Sprint Championship circus arrived at Kirkistown on Saturday 7 August for the second round of the championship.

It was great to see Simon and Tim Woodside return again to the championship, with Tim driving the ex-Robert and John Morgan Pilbeam. Robert Dwane made the long trip up and was driving Patrick Roche`s OMS CS after his own car wasn’t just quite read.

However after beating Patrick in his own car it is unknown if Patrick will lend him it again. Other new, or different competitors to note included Trevor Roberts who debuted his new Force nine, Jim Hutchinson, in his RSR Escort, Richie O`Mahoney Jnr and Snr who travelled from Dublin with a Mark2 Escort and another Escort RSR, Ryan Murray who debuted his newly rebuilt Subaru in class 12 after having a mare of a year with technical issues.

Another debut driver was Arnie Wishart who borrowed his sons Peugeot 106 GTI and had a “bit of craic” in class 1. Arnie only got his first competition licence at the turn of the year. This was his maiden event at Kirkistown and his maiden sprint as well and he drove to a superb second in class on his debut event.

Rumour has it that Arnie has well and truly caught the sprinting bug and was overheard saying “I’ll be back”. It will be interesting to see if Stephen lends him his 106 again although the fact that he returned this competition car back to Stephen intact on this occasion is a big bonus in his favour. Ohh and to make it an extra special event for Arnie, he turns 70 this week. So Happy Birthday Arnie!!

In terms of the action on the track, first practice was a little hectic and so it was decided to go straight into the timed runs after only one practice as the weather forecast was showing rain from lunchtime onwards. As always it was close at the top. Alan Cassells blasted into the next week in his OMS 25 setting a first timed run of 109.37 sec, although not his fastest run, he was unbeaten all day and finished up with FTD on his third run with a 108.31 sec run to win the event.

Steven Gault from Ballymoney continued with his tradition of attacking from the start and set a blinder of a first run to go 2nd overall with a 114.32. Steven, who is always consistently fast with every run set his fastest run in his second when he did an 114.06secs. All 3 of his runs were within 0.26 of a sec of each other all on 114.00 secs runs. This goes to show just how consistently fast Steven was in every run. Steven was also the fastest through the speed traps with a 125mph time. Only Gerard O`Connell matched this time in his World Series car. Interestingly Alan Cassells, the event winner set a fastest speed trap time of 113mph in his last run.

Second Overall went to Gerard O’Connell in his World Series car with a best run of 110.61 mph in his second run. Third overall was taken by the returning Simon Woodside who improved steadily during the day, despite never being out of the top 4, when he set a blinding 113.10 sec run in his last run. Steven Gault took fourth overall ahead of the fastest of the visiting English Competitors Graham Porrett who steered his 3.4 Lola Tegra T90 to fifth overall with Tim Woodside sixth in his debut event in his Pilbeam MP82.

Working our way through the time sheets we saw an epic drive from the returning Ryan Murray who finished a mere 1.33 secs behind his class winner Oliver Cormican in his Mitsubishi Evo. Trevor Roberts debuted his new Force Nine and was simply stunning to watch. Despite only doing 2 timed runs, he blitzed the existing class record in his first run and took 0.26 secs of the record which has been unbeaten in 10 years. When he gets some more seat time in the car Trevor will definitely be at the top of the time sheets in that car. Watch this space!!

It was fantastic to see Scott McMullan back in the family Locost after some slight issues at Cairncastle. Scott took a fabulous 3rd in class which is a brilliant result and further proof, if it was needed of how talented Scott is behind the wheel. Also, it’s great to see John Donnelly getting the hang of his Pilbeam MP62 and doing so well in it after a troubled start. John was 8th overall and 6th local in what is an older generation single seater, so well done John!

In terms of the categories, Oliver Cormican took Modified category honours ahead of Ryan Murray by a mere 1.33 secs. Neither Oliver nor Ryan managed 3 timed runs so the results could have been different had both drivers had 3 runs at it. Third in the modified category went to Stewart Strain who once again pulled a giant killing drive off in his little 205. When you watch Stewart you simply cannot miss his smooth and precise driving style and wonder how on earth he manages to carry so much speed into corners. I swear he must source his front tyres from whoever makes the wheels for the Portrush flyer as the car handles like it is on rails. I’ve also had the pleasure of getting a run in the car with Stewart and he is so cool and calm you would think he was only doing 30 mph, until you looked out the window!!

Jim Hutchinson took Specialist Category Honours in his Escort RSR despite still having a couple of technical gremlins. Jim had a fantastic drive to 18th overall, David Hawthorne once again proved to be the fastest Hawthorne as he took second in the specialist category a huge 2.1 secs ahead of his brother Steven Hawthorne who was third in the category.

Road going honours once again went to Phillip Cardy in his Subaru Impreza, although he was pushed hard by Conor Hamill who took second in his BMW M3 V8 ahead of Aaron Vance in his Clio 197.

In the Heaslip Ladies Challenge trophy it was role reversal today as Sheryl McBride took the challenge win from Emma Campbell with Kathy McDade third and Amy Hawthorne fourth. When the factored times were compiled Sheryl had the nod by a mere 2.51 secs from Emma who was 3.75 secs ahead of Kathy.

Amy was fourth but as she had only previously completed in 1 event her factor conversion time wasn’t as favourable as the rest of the girls, however this will correct itself as Amy does more events. A quick comparison of times between this event and the last shows that Sheryl and Amy have both made significant leaps in their times since the last event and Amy especially has found 18 seconds since her first day out in the car. Amy also competed on the Sunday and brought her times down even further.

With Gary Milligan not being present it was a 2-way shoot out for the title of fastest mini in the West, which Karl Johnston won, by a country mile, from Gerry McGarrity. Gerry obviously decided to see if he could drive as slowly as Gary and it turns out he can!

Three regular attendees at this event were sadly missing on Saturday due to illness, so on behalf of the entire SW Adair Tyres Northern Ireland Sprint Championship, all its drivers, supporters and friends we would like to wish Tom Lawther, Wendy Young and Richard Young a speedy and full recovery, all our best wishes and we hope that they all get well soon, We are all thinking of you

The next event is scheduled to be to be the North Ulster Car Club September sprint at Nutts Corner on 25 September. Details of this event will be announced as they become available.

If you keep watching the championship facebook page and the website on https://www.anicc.org.uk/Discipline.aspx?d=7 any updates will be posted there.