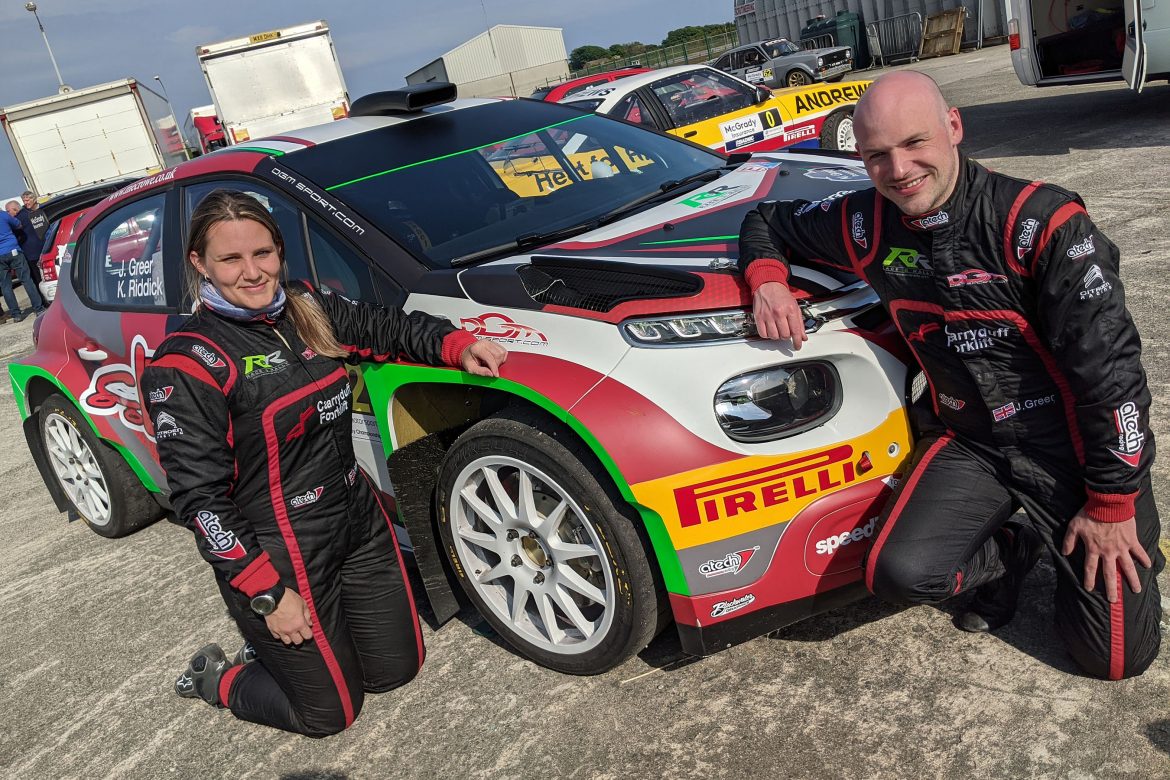 Their victory marked a hugely successful return to action for rallying. It was the first stage rally held in Northern Ireland since March 2020 and with the sun beating down on County Down’s Bishopscourt Race Circuit – the same venue that hosted the last event before the pandemic took hold – Greer and Riddick romped home to victory with their Citroen C3 R5.

At the Ballynahinch and District Motor Club organised event, their final winning margin was 33.3 seconds over the Ford Focus WRC belonging to Derek McGarrity and Paddy Robinson. McGarrity had been fastest on the opening stage and was one of the favourites for victory but he had no answer to the flying Greer over the remainder of the event.

In fact, the entry list read like a who’s who of motorsport with multiple former champions lining up to do battle. Greer, the 2017 champion, was pitted against eight-time champion McGarrity as well as reigning champion, Stephen Wright, who won the series in 2019.

Meanwhile, 2010 champion Stuart Biggerstaff was also in the mix with a hired Fiesta R5, as well as three-times champion Kenny McKinstry.

But from the outset, it looked as though it was always going to be a battle between Jonny Greer and Derek McGarrity. It was McGarrity who took first blood, going fastest on the opening stage with his stunning Focus WRC by eight-tenths of a second from Greer. Then Greer upped the ante, emerging from stage two with a six-second lead and he never looked back.

“I thought we had an OK run on the first stage,” Greer said at the finish. “So we tidied things up a bit on stage two. I didn’t expect to be so far ahead on that stage but once we managed to do that, we just had to try and keep doing the same thing again and again!”

Even catching another competitor on stage five failed to slow the Citroen pilot and Greer rallied home to secure a solid victory and maximum Championship points.

Derek McGarrity and Paddy Robinson had to settle for second on this occasion. The Glengormley pilot reckoned he struggled a little bit with the size of his car compared to the smaller R5 machinery but second overall in a 16-year-old car was no mean feat!

“We caught a couple of cars during the day but it’s just the nature of the event,” McGarrity said. “We had a small misfire but it wouldn’t have made much difference.”

Desi and Mark Henry held third over during the early stages until a front puncture dropped them out of contention. Instead, Stephen Wright and Liam Moynihan took up the mantle and they went on to complete the top three in their Ford Fiesta.

Wright battled with an increasingly fast Phillip Allen and Ian Dickson until a spin and a stall on stage five thwarted Allen’s challenge. A charge on the final reduced the gap to Wright to just four seconds but it wasn’t enough for the Hyundai pilot.

“We threw it away on the fifth stage,” Allen rued, “but that’s the way it goes.”

Aaron McLaughlin and Darren Curran acquitted themselves well, especially considering it was McLaughlin’s first visit to Bishopscourt. They managed to fend off a challenge from Stuart Biggerstaff and Chris Nelson in the closing stages to seal fifth with Biggerstaff settling for sixth.

“We were right behind him on the last stage and things got a bit messy,” Biggerstaff said. “It was a bit of red mist!”

Peadar Hurson and Damien Connolly had a difficult day in their Fiesta WRC. They reported having a few untidy runs but eventually came home in seventh ahead of Niall Henry and Damien Duffin.

“It was a really good day,” Henry said. “I can’t complain at all. Like everyone else, we caught a couple of cars but everything worked well.”

Barry Morris and Dylan Doonan nipped into ninth overall after the final stage, a couple of seconds ahead of Kieron and Amy Graffin. Morris also claimed the two-wheel-drive category win in the process after a faultless drive in his Darrian.

Damian Toner and Denver Rafferty tried to keep Morris honest but in the end, the lightweight Darrian proved too much to handle. Morris took the category win by more than 20 seconds, with Toner third ahead of the Starlet belonging to Jason Black and Karl Egan.

Further down the order, Kenny McKinstry and Dean McDowell struggled to get into a groove with their Impreza WRC. Their event came to an end after stage five when they failed to complete the required number of laps and opted to sit out of the final stage.

There were plenty of dramas throughout the field too. James and Heather Kennedy had to weld part of their steering system, forcing them to complete the event without power steering. A time penalty added to their woes, leaving the two-wheel-drive category hopefuls out of contention for the win.

A heavy landing after a jump burst the radiator in Andrew Bustard’s Evo, dropping him down the order, while Nicky Caughey (Evo) also succumbed to radiator trouble. Paul Britton slid sideways into some trackside tyres on the opening test, damaging the side of his Subaru, and Peter Bennett (Fabia) endured some car trouble and a puncture that dropped him down the standings.

Competitors are now looking ahead to round two of the McGrady Insurance backed series in August. Subject to government regulations, the Dogleap Stages Rally is due to take place on 7 August, followed by the Loughgall Stages on 21 August. For more information, visit nirallychampionship.com.

Words & Photos: JONATHAN MACDONALD
images must not be used in any way without prior written consent of the photographer