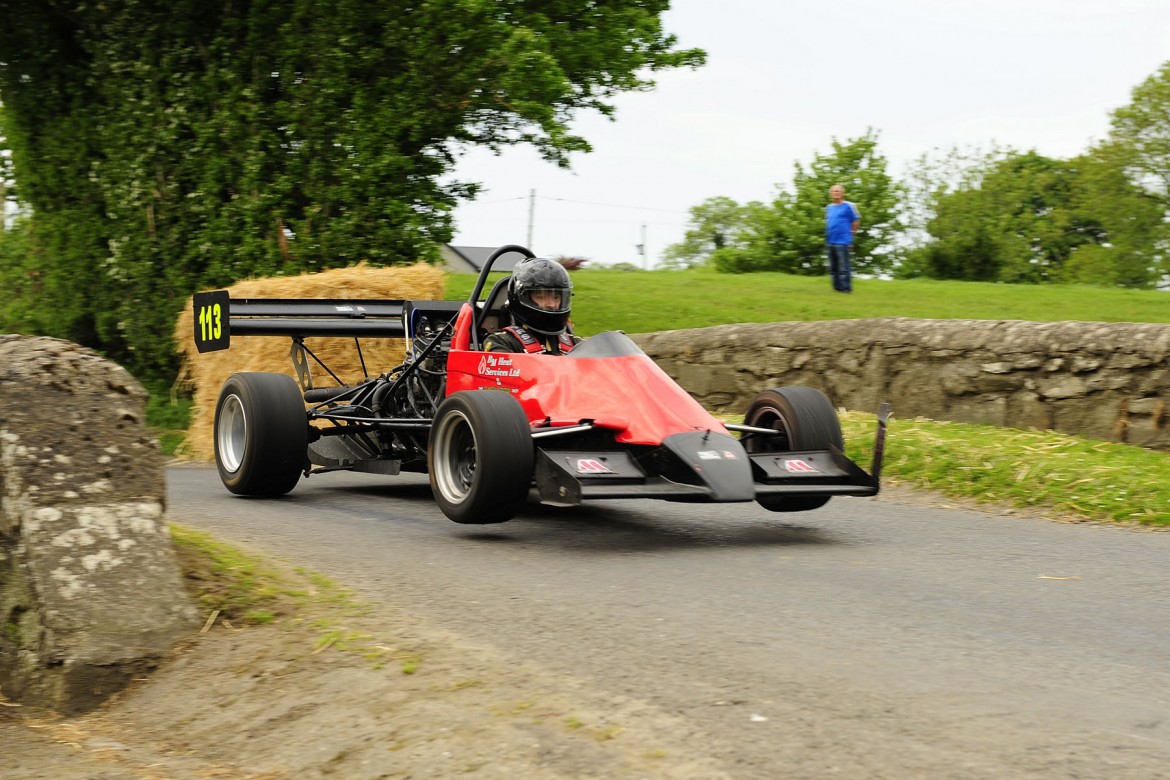 Spamount Hillclimb is one of the youngest events in the Millers Oils sponsored  Northern Ireland Hillclimb Championship, but the enthusiastic organising team from Omagh Motor Club have quickly established it as a popular and challenging venue.

Warm, sunny conditions greeted the 62 starters who travelled from all parts of the country to compete in the County Tyrone event. Richard McGimpsey has had a great start to the season, winning two of the first three rounds and he was quickly down to business at Spamount.

With strong times in practice and then nipping three tenths off Seamus Morris’ Hill Record on his first timed run, further improvement followed in Run 2 with his fastest time of the day, a 39.94 – an excellent new Hill Record.

Closest challenger on the day was Gerard O”Connell who,  delighted with his first NI Championship win at Craigantlet,  decided to bring the beautiful Radical out again at Spamount.

In spite of its track suspension set up, the racing machine coped well enough with the bumps to record a brilliant 40.80 time on the fourth run of the day – an incredible result considering that was less than three tenths off the old Hill record. Godfrey McCartney in his Lotus Elise R took class 5 honours and also broke the class record on his first ever visit to the hill | Photo: Gary Craig Motorsport Photography

Just as incredible, was the performance of Ivan McCullough, who swept the big Nissan GTR into a fine 3rd overall with a best time of 41.81.

In the Classes, the Roadgoing men in Class 2 continued their ferocious, season long battle and this time it was David Gibson and Conor Hamill fighting for the win, with the Escort taking the top trophy and a new Class Record from the BMW.  The competition between such a wide variety of cars in this Class has been a highlight of the season.

Alan Cassells is another man having a stellar season in the Peugeot 106 and he had to push hard to hold off local man Andrew Bustard’s Escort in Class 10, no Class record this time though.   Seamus Morris took the big Rallycar Class in the Darrian and a new Record along with it, and it was good to see Thomas Purdy back in action with his lovely Escort.

Class 12 went to Ivan McCullough, just under the Class Record.   Oliver Cormican didn’t have such a good day though with a few niggles meaning he only got one proper timed run – up to then, it looked like he may give Ivan a run for the Class win.  A great result too for Godfrey McCartney on his first Championship Hillclimb in his fabulous Lotus, winning Class 5 and re-setting the Class Record. Other Class Records fell to Phil Dorman in Class 4, Gerard O’Connell in 9, John Donnelly in Class 14 and Gerry McGarrity hurled the Cooper S to victory in Class 16A .   Alan Jardine took another big chunk out of the Class 16B record on his way to the Class win and is making strong progress up the Leaders Championship in the process.

The other Class Winners were Dennis Watson continuing to dominate Class 1, Paul Montgomery taking Class 3 with another fast run,  Gordon Fogarty’s rapid Fiat X1/9 in Class 6A and  Paul Hamill taking Class 7 at his local Hill.

Next up in the Championship is Larne Motor Club’s fabulous 2 day event at Cairncastle on the Antrim Coast on June 29th & 30th.     Not to be missed by either competitors or spectators, this event is one of the highlights of the motorsport season  –  don’t miss it  !