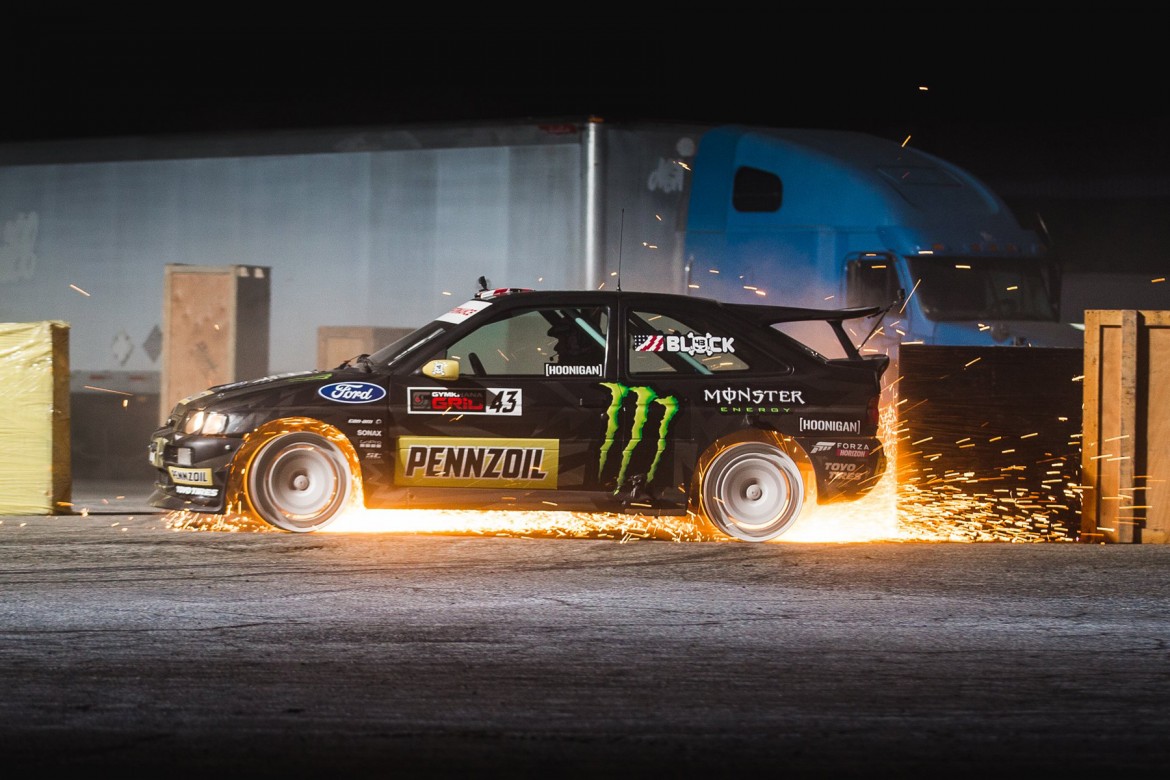 What do you get when you take a highly successful businessman who just happens to be the definition of petrol head, add a plethora of racing cars with an infinite supply of rubber, and then throw in auto-test courses in some of the world’s most unlikely places?

Gymkhana is what you get!

To motorsport fraternity purists, this term will sound like it’s from some sort of undiscovered foreign language, perhaps the lingo used by  a tribe deep in the Amazon jungle – however it is far from it, in fact being a term most understood by the Play Station generation.

A decade ago, Ken Block from California set out to promote DC Shoes, a company he co-founded in the mid-90’s, in a way that at that time had never been explored and based on the viral success of Gymkhana One, since being posted to YouTube in 2008, Block has since exploited advertising based upon a motorsport initiative that he pretty much invented. Gymkhana One – Image courtesy of www.hoonigan.com

So what is Gymkhana?

Well as said before, most of my generation (child of the 80’s) and older, will recognise it as a form of auto-testing, however in its viral video guise; it can’t be, as it isn’t against the clock.

It’s a show of driving ability that involves horsepower the Cheltenham festival can only dream of, and tyre smoke that would dwarf what we saw when Primark went up in flames.

Let me refresh you on what Ken Block has achieved over the last ten years, culminating in what you will see at the bottom, his tenth and allegedly last Gymhkana video.

Part One featured a 530WHP Subaru Impreza which shred tyres on an abandoned airfield and inside derelict aircraft hangers, the highlight of which was Ken performing donuts around a moving segway.

Part Two yet again saw the use of a Subaru Impreza, this time a newer model with 566WHP and was filmed on the dock-yards at the Port of Los Angeles with one highlight being Ken drifting his car across fourteen fluorescent tubes laid on the ground, bursting them all in slow-mo. Part Three saw the switch to a Ford Fiesta with 650WHP and a flight to Europe, France to be precise, L’autodrome de Linas-Montlhéry was the chosen location and with its 51degree banked walls, defying the laws of physics was the main aim of this driving gem.

Part Four paid homage to Hollywood’s blockbusters with an almost free reign around Universal Studios in California where raw driving was accompanied by some sliding camera trickery aboard Ken’s 350WHP Ford Fiesta with the highlight being Ken smashing through a set of ladders from which a Gorilla jumped off, just in time.

Part Five saw the streets of San Francisco grind to a halt as ken slid and jumped his 650WHP Ford Fiesta around in a way the city has likely never seen before as ken performed donuts around a moving tram as well as DC Shoes two-wheeled athlete, Travis Pastrana as he wheelied his motoX bike along the road, before Ken jumped the Fiesta onto a barge in the bay for some more tyre shredding antics.

Part Six and a global driving challenge named ‘Gymkhana Grid’ was in its infinite stages, as such, the perfect course was built for the 650WHP Ford Fiesta to explore just what could be achieved in the heat of competition. Diggers, shipping containers, moving Lamborghini’s, a pair of moving Police ridden segway’s and even a swing ball from a crane acted as obstacles. Part Seven saw the birth of an all-new vehicle and possibly the world’s first all-wheel-drive Ford Mustang, and with 845WHP it was always going to be epic, especially given they closed off Los Angeles streets to make this film, the highlights of which include using the flood control channels as a high-octane playground and drifting under a jumping low-rider car.

Part Eight saw a 600WHP Ford Fiesta travel to Dubai where Ken performed stunts around some of the world’s most exotic police cars, drifted under a Ford pick-up truck travelling on two wheels, and got the hole-shot in a drag race against a few unsuspecting hypercars.

A close encounter with a low-flying stunt plane against the Dubai city-scape led into massive drifts under the fuselage of a moving Boeing 747-238B and with over 550,000,000 video views, it was time to roll out a 600WHP Ford Focus and push the boundaries a little more than before for Part Nine, which kicked off in an abandoned part of New York.

It was very much a refined version of all that had been seen before, with highlights being Ken jumping sideways across railway tracks in front of a moving locomotive whilst the most spectacular, and perhaps breathtakingly dangerous moment was when the Focus almost dropped a wheel off the edge of a pier mid-donut. Part Ten, said-to-be the final farewell to these viral videos of insane automotive antics that we have fallen to love over the years, despite how far-fetched they are we haven’t been put off by the fact that it has clearly taken 24.3 attempts to get the perfect drift for use in the final cut – we have watched them all with a smile.

From here, it is across the Atlantic to Detroit, Michigan, with Block reunited with his Ford Mustang now equipped with a monumental 1,400WHP. Ken has always enthralled crowds at WRC Rally Mexico, so it is no surprise he visits the colourful streets of Guanajuato in his Ford Focus.

Moving old-school and into something the purists can relate to, Ken then heads to Los Angeles and jumps into the driver’s seat of his Ford Escort Cosworth GrpA rally car, when he even does a sequence without tyres fitted, creating the dream shot for anyone on-set with a camera. Finally, it is off to historic Route 66 in Shamrock, Texas (the inspiration for the animated film Cars), for the world debut of Ken’s all-new 1977 Ford F-150, a pick-up truck based on the engineering involved in his Mustang build, and is every bit as crazy, in all the right places.

“I can’t believe it has been ten years of making these Gymkhana videos,” said Block. “That’s wild! So, for number ten, we tried to make it the biggest and best. It was two years in the making — from initial ideation to the launch in The Gymkhana Files on Amazon Prime. It’s insane the effort that went into this one, and I couldn’t be happier with the end result.”

Block continues; “It was rad making The Gymkhana Files and featuring the Gymkhana TEN there for the first time—but, I’m also really happy that we’re now able to make it publicly available on YouTube to everyone worldwide that may not have Amazon Prime. I think viewers across the globe are going to be stoked when they see all of the tire slaying action we’ve jammed into this one.” “Also, I’d like to take a moment to thank all of my partners on this project, it has been a massive undertaking and I couldn’t have done it without Ford, Forza, Toyo Tires, Pennzoil, Monster Energy, Can-Am and of course my team at Hoonigan. Thank you, everyone!”

Now – go and get the big screen warmed up, surround sound turned on at max, a large cuppa tea and chocolate digestive in hand and enjoy twenty whole minutes of adrenaline fuelled tyre killing…

For a driver that has never gained great success in competitive driving, I think it’s safe to say Block is best suited to these multi-take entertainment video’s aimed at brand awareness, something Ken has nailed to perfection for a decade now and for that, fair play Ken Block! 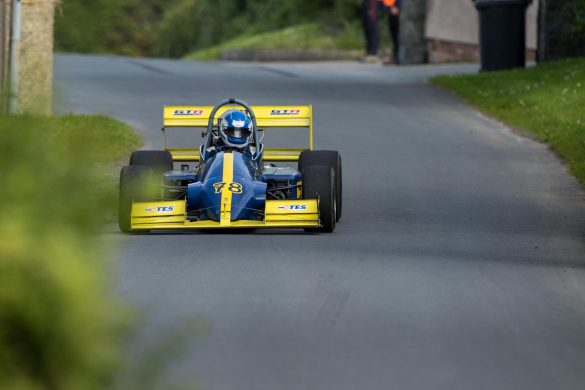