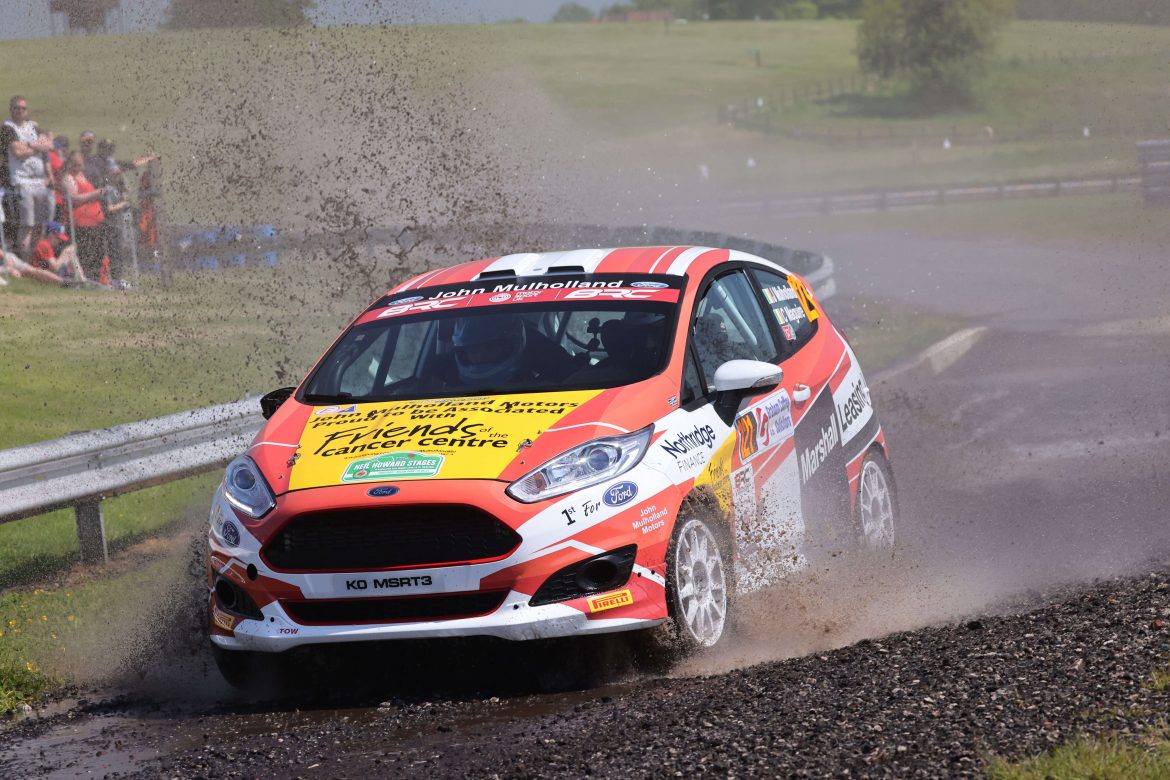 Irishman Sam Moffett took a nail-biting win at the opening round of the 2021 Motorsport UK British Rally Championship on Bank Holiday Monday (31 May), taking victory by a slender one-second margin at the Neil Howard Stages in assoc. with Graham Coffey & Co. Solicitors.

Moffett, from Monaghan, and co-driver Keith Moriarty vaulted their Ford Fiesta Rally2 up the leader board in impressive style during the day, securing their maiden BRC victory in the process. Second, went to Rhys Yates/James Morgan who equalled their best BRC result with second.

The top-two were hounded all day long by a gaggle of rapid British Championship top-flight crews and Osian Pryce/Noel O’Sullivan would keep the pressure on their rivals on each test to take their Volkswagen Polo to the final podium spot.

Despite being in fifth place on the opening stage and having no competitive experience in the Pirelli-shod Fiesta Rally2 machinery, Moffett’s pace increased across the event’s eight tests to find himself second after the sixth timed run. A solid run on the seventh encounter saw him take the lead, holding off Yates’ fastest final stage charge to secure the win by a mere one second.

“We’ve had a phenomenal day. We had a real good push this afternoon in stage five and six which managed to put us right ahead at the end of the day; it’s an amazing feeling.

“It’s been good to get in the mix with some new names and fierce competition. [All] credit to Dommy [Buckley RSC] for preparing an awesome car & for Keith [Moriarty] sitting in for the day. It’s been great to be back behind the wheel and I`m really looking forward to the Nicky Grist; we’ve got more interest [in the series] now we’re here on the top step. Huge thanks to all the marshals and credit to the organising team too for putting on a fantastic event”.

It certainly wasn’t a clear-cut battle as the lead would change hands several times over the course of the 56-mile event. Second place man Yates would have that honour after SS6, only to lose that lead on the seventh to eventually take the runner-up spot on his BRC return in the Michelin-backed Fiesta.

Volkswagen Polo debutant Pryce had a strong start to the day in second, before dropping out of the podium positions at the mid-point of the rally. He would make it back into third as series newcomers Frank Bird/Jack Morton set a blistering pace to lead much of the event, before being excluded due to a technical infringement.

The impressive entry list saw almost 45 British Rally Championship contenders take the start and the competition was first-class throughout the leaderboard. A sizeable crowd were able to witness the scintillating action, up close and personal around the Oulton Park layout. The leaderboard continued to change dramatically over the course of the day, with two-time BRC champion Matt Edwards featuring strongly throughout. A ten-second penalty saw the Volkswagen Polo ace finish fourth with Darren Garrod alongside in the co-drivers seat.

Desi Henry/Dale Furniss opened their BRC account with an impressive fifth place in their Hyundai i20 as Seb Perez/Gary McElhinney pulled themselves back from outside the top ten at one point, to take sixth in their M-Sport Fiesta Rally2.

The Junior BRC battle was a little more straightforward, however still provided plenty of action out on the stages for the fans to enjoy. Hunting down the impressive FIA World Rally Championship prize drive opportunity for the series victor was Junior WRC contenders William Creighton/Liam Regan.

Their experience on the world tour saw them take start-to-finish victory in their Ford Fiesta Rally4, with Creighton, from Moira, aiming to better his two-time Junior BRC runner-up finishes this season.

Creighton was pushed all the way by series debutants Kyle White, from Belfast with co-driver Sean Topping who wrung the neck off their older generation Peugeot 208 to take second place, 11 seconds back from the winner. Eammon Kelly/Conor Mohan made it an Irish one-two-three to take the final rostrum position in third, taking his Fiesta Rally4 to a fine Junior BRC debut.

The next round of the series switches to the infamous Welsh forest stages of the Nicky Grist Stages in July.