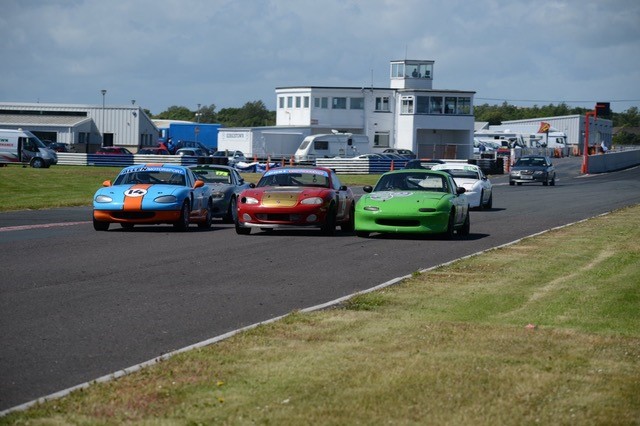 With no major visiting classes, the car race meeting at Kirkistown on Saturday 25th June seemed to have a quieter ambience.  However, the racing on display was anything but quiet or serene!

The first race was for Saloons. Lurgan driver, Peter Baxter, as usual, had dominated qualifying and started from pole position.  Ballynahinch man, Ralph Jess had qualified second. Less than one second covered the next three drivers, Gareth Blaine, from Downpatrick, newcomer, David McMinn, from Kells, and Nutt’s Corner man, Donal O’Neill.  When the lights went out Baxter struggled to get his Seat Supercopa off the line, allowing Jess into the lead and holding up the right side of the grid.  McMinn had got his diesel Seat Ibiza off to a great start.  O’Neill was sixth.  By the end of lap one Baxter was into the lead and going away. McMinn was up to second and Jess, who was beginning to experience some car problems in his BMW M3, had dropped to third.  O’Neill had got his Seat Leon into a solid fourth. Lisburn driver, Greer Wray, had got his BMW 330i past Blaine’s similar machine and was now fifth.  Jess’s car cleared temporarily and he passed McMinn on lap two.  Blaine also passed Wray on the same lap.  One lap later the race was stopped to recover a stranded car.

At the restart, once again, Jess led away but he was soon overhauled by Baxter.  McMinn was third. Blaine moved into fourth, ahead of O’Neill.  On lap eight, Jess’s car slowed into retirement.  Both Blaine and O’Neill passed the inexperienced McMinn and that is how it remained to the finish.

Next was the first time that the Modi-5-Cup Mazdas had a grid to themselves.  Six cars took the start.  Godfather of the class, David Cousins, from Ballywalter, had been testing during the week and experimenting with various spring rate changes. This paid off and he was able to get enough of a lead established quickly, that he could take his own lines and not have to worry about defence.  Not so for the next three drivers! Moira man, Francis Allen dropped to third on lap one, behind the fast starting Damian Moran, from Newry.  Derry driver, Gavin Kilkey, was a very close fourth. These three entertained thoroughly throughout the race, with a display of close, clean and respectful driving.  Often there were millimetres between them, as they came down into McGuire’s Hairpin, three abreast.  On lap two, Allen passed Moran, who passed him back again on the next lap. On lap four Allen did it again.  On lap eight, Kilkey passed Allen, who re-passed him on lap eleven. On the final lap Kilkey made a move stick to keep third place.  At the chequered flag 0.292 seconds separated these three drivers, such was the closeness of their battle!  Gregory Radcliff, from Banbridge, was making his race debut.  He finished fifth as Culloville driver, Jim Kennedy’s car expired.

The “Featured Class” of the meeting was the Fiestas. Thirteen cars took the start of their first race.  On lap one Banbridge driver, Neville Andreson, got shuffled down to fourth place. Derek Graham, from Portadown, took the lead, with Belfast driver, Mark Stewart, second and Derek’s son, Michael, third. Mark’s brother, Paul Stewart, was a fighting fifth. Derry driver, Chris Doherty, was a solid sixth.  On laps three, four, five and six, Paul Stewart and Anderson swapped places constantly, as did Mark Stewart and Michael Graham on laps five and six.  On lap eight, Michael Graham made a mistake, dropping down to fifth.  Meanwhile, at the front, Derek Graham and Mark Stewart were swapping positions for the lead, corner by corner.  Michael Graham re-passed Paul Stewart on lap eleven.  The man who can never be ruled out, Neville Anderson, had closed on the leaders and on the final lap both he and Derek Graham passed leader Mark Stewart.  The final result was another win for Derek Graham. Anderson was second.  Mark Stewart was third. Michael Graham was fourth. Paul Stewart was fifth and Doherty was sixth.

By comparison with the Fiestas, the FF1600 race was much tamer.  Ballymena driver, David McCullough, passed The Randalstown Rocket, Alan Davidson, for the lead on the first lap.  He then proceeded to drive away, winning by over 7 seconds.  However, a fierce battle ensued for second place by the two Mondial M89 drivers, Davidson and Brandon McCaughan, from Ballycastle.  Davidson defended robustly for fifteen of the sixteen laps before McCaughan squeezed through for the place on the final lap!

The Roadsports were next out.  This class has really captured the attention of spectators, mostly because of its high speeds and also due to the “established king vs young pretender” rivalry between Jim Larkham, from Newtownabbey, and his nephew, Steven Larkham, from Carrickfergus.  Both drive similar Radical cars and Steven has already taken the outright Roadsports and Sports Car lap records this year. At the start, Jim took the lead but on lap two Steven got past.  John Stewart, from Bangor, also passed John Benson, from Holywood, for third place. On lap four Jim re-passed Steven but on lap seven Steven finally retook the lead.  On lap ten, Mike Ward, from Youghal, got his Radical past Benson’s Crosslé 37S for fourth place.  This battle continued and on lap fifteen Benson took the place back. Brian Elliott, from Banbridge completed the top six.

Race six was a two car race for Ginetta Juniors, that would not have happened on a busier day. Both Matthew McCord, from Cookstown and Ethan Campbell, from Strangford retired before finishing.

The second Saloon race saw Peter Baxter’s Seat Supercopa disappear into the distance once again.  Ralph Jess retired his BMW on lap three, promoting David McMinn’s Seat Ibiza to second. Gareth Blaine and Donal O’Neill were on his bumper before Blaine’s car expired on lap seven. The next eight laps saw O’Neill pressurising McMinn constantly.  McMinn, who was only in his second race, defended masterfully. As they crossed the finish line there was 0.37 seconds between them. Greer Wray was fourth and Michael Clune, from  Blessington, was fifth in a Nissan Skyline.

The Modi-5-Cup reverse their grid for their second races.  This put newcomer, Gregory Radcliff, in pole position.  Possibly, nerves made him mess up the start, getting a ten second penalty for “an out-of-position start”.  Francis Allen, who may have been taking his cue from Radcliff, also got a similar sanction.  On lap one Gavin Kilkey grabbed the lead, with Allen giving him close attention. Radcliff’s inexperience saw him drop to the rear. David Cousins, who was starting from the rear, got into a mighty battle with Damian Moran.  This allowed both Kilkey and Allen to get away, in much the same way that Cousins did in the first race.  The Cousins/Moran battle was resolved on the final lap in the former’s favour.  When penalties were applied, the final result was 1st Kilkey, 2nd Cousins, 3rd Moran, 4th Allen, 5th Kennedy and 6th Radcliff.

The second Fiesta encounter saw Paul Stewart lead from start to finish but it was no easy victory. Both his brother, Mark, and Michael Graham, pushed him hard.  If they hadn’t been scrapping with each other, one of them may well have been able to depose him.  Chris Doherty got shuffled down to sixth place on lap one, while Neville Anderson rose from sixth to fourth.  Derek Graham was fifth and he ended up battling Doherty and Corey Alleyne, from Letterkenny.  On lap four Michael Graham passed Mark Stewart. Derek Graham was passed by both Doherty and Alleyne. By lap six he had regained the positions. On lap eleven Mark Stewart moved into second place, only to lose the place again on the final lap.

While David McCullough had a start to finish victory again in the second FF1600 race, it was slightly closer than the first.  This time Alan Davidson was able to get away from Brandon McCaughan and chase McCullough. Antrim’s Drew Stewart ran in fourth place throughout the race.  The main “battle” was between Robert Johnston, from Crumlin, and Mike Todd from Parkgate. It was resolved in Todd’s favour.

The second Roadsports race provided two good battles.  Once again, Jim Larkham took the lead, with Steven Larkham pressurising him all the way.  John Stewart was sixth on lap one but he soon passed Blackrock’s Bernard Foley, in a Crossle 42S, and Brian Elliott’s Radical during the early laps, to set up an encounter with John Benson’s Crossle 37S.  On lap six Steven Larkham got into the lead but couldn’t really break away from his Uncle Jim.  Meanwhile Stewart had passed Benson but he could not break the tow either.  At the end, Steven was 1.3 seconds ahead of Jim and Stewart was 1.4 seconds ahead of Benson.

The second outing for Ginetta Juniors saw 50% of the field finish. That was Ethan Campbell.  Matthew McCord retired on lap six.

The final race of the day was a non-championship race for Fiestas.  Grid positions were drawn from a hat, with eight starters. To say it was a brilliantly crazy race would be an understatement!  500MRCI treasurer, Michael Mulholland, led for the first two laps. On lap three, Newtownards driver, Craig Brown, relieved him of the lead. Mark Stewart, who had dropped from fourth to seventh on the first lap, before battling back through the field, took over the lead on lap five, only to lose it to his brother, Paul, a lap later.  Megan Campbell, from Strangford, had risen from fifth to second before retiring with a puncture. Corey Alleyne had started third, dropped to fifth, risen back to third, dropped to fifth again before taking third place finally from Brown.  On the last lap, Paul Stewart took the lead back from his brother, Mark.  Stephen Walker, from Helensburg in Scotland, climbed through the mayhem to take fourth. Chris Doherty, who had been as high as third, finished fifth and Brown finished sixth.

All in all, it was a great day’s racing, in glorious sunshine. The commentator, Alan Drysdale, probably had to have a lie down after supremely covering so many great battles throughout the event.

Our next event, which will see the return of the amazing Superkarts, as well as a full programme of car races, takes place on Saturday 30th July.