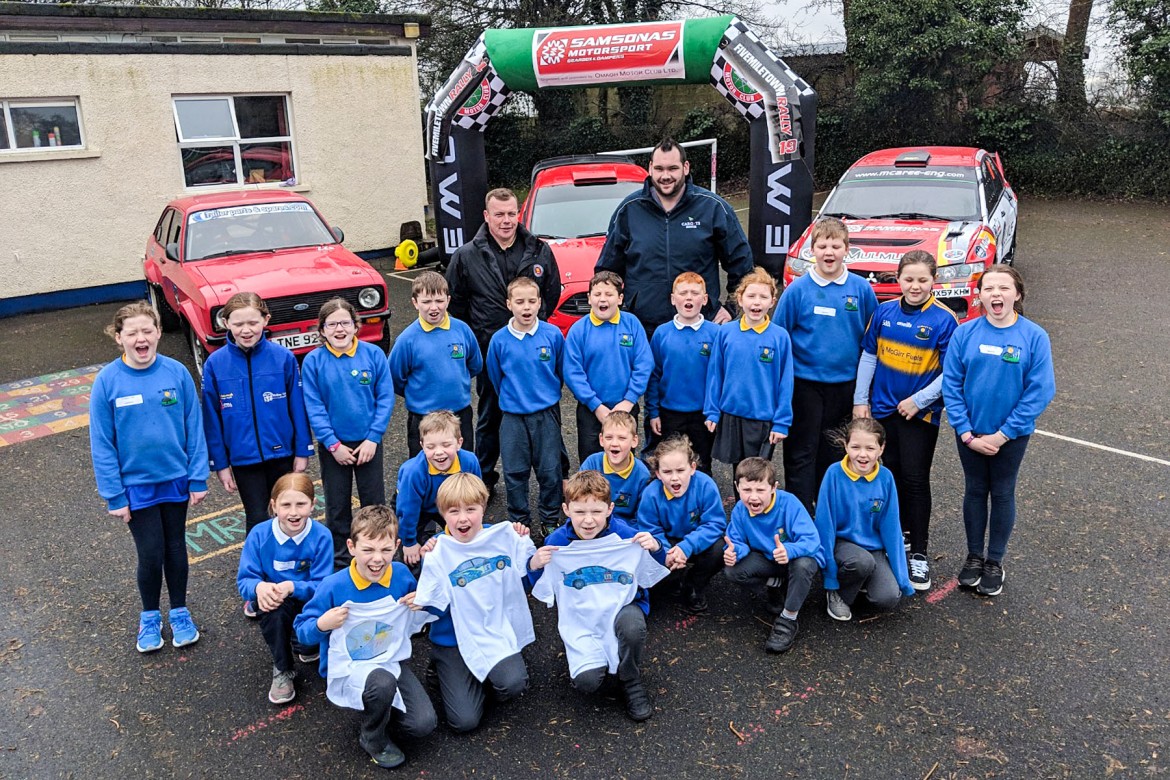 Students Jayden, Cormac and Dara were selected as the top three, with Jayden’s Subaru World Rally Team inspired design chosen as the overall winner. They each received t-shirts with their designs printed on the rear.

All students were treated to a presentation about motorsport by motor club representatives, Niall Mc Gonigle and Ryan Darcy, who teamed up with competitors Shane McGirr, Martin Cairns and Motorsport UK’s Regional Development Officer, Jonathan MacDonald.

They shared their knowledge and experiences of being involved in the exciting high-octane sport and delivered a strong safety message to ensure the pupils stay safe.

Students also had the opportunity to see a variety of equipment including a Formula One seat and wheel as well as race helmet, gloves and race suit, not to mention three rally cars in the school playground! The Samsonas Rally Fivemiletown makes a return to the Northern Ireland rally calendar for the first time since 2016. Originally called the Spring Rally, the event has been rejuvenated with the backing of Lithuanian businessman, Martynas Samsonas, who owns the hugely successful motorsport transmission and suspension manufacturer, Samsonas.

The company’s products are used by motorsport competitors all around the world and many of them will be used by contenders at the 16 February event.

The rally will feature a total of eight stages all contained within the forests surrounding Fivemiletown. The first car will leave the start ramp at the Bridge Tavern, Eskra, around 10.30am on the Saturday morning before heading to Fivemiletown High School for a tyre change ahead of the first loop of four stages.

After those four stages, crews will have their cars refettled at the event service area, also located at the high school, before returning to the forests for the final loop of four stages. The winning crew will be crowned at the Bridge Tavern finish at approximately 5.25pm.

Live updates will be provided throughout the day via ‘OnThePacenote.com’ Facebook page. More details can be found online at www.omaghmotorclub.co.uk.