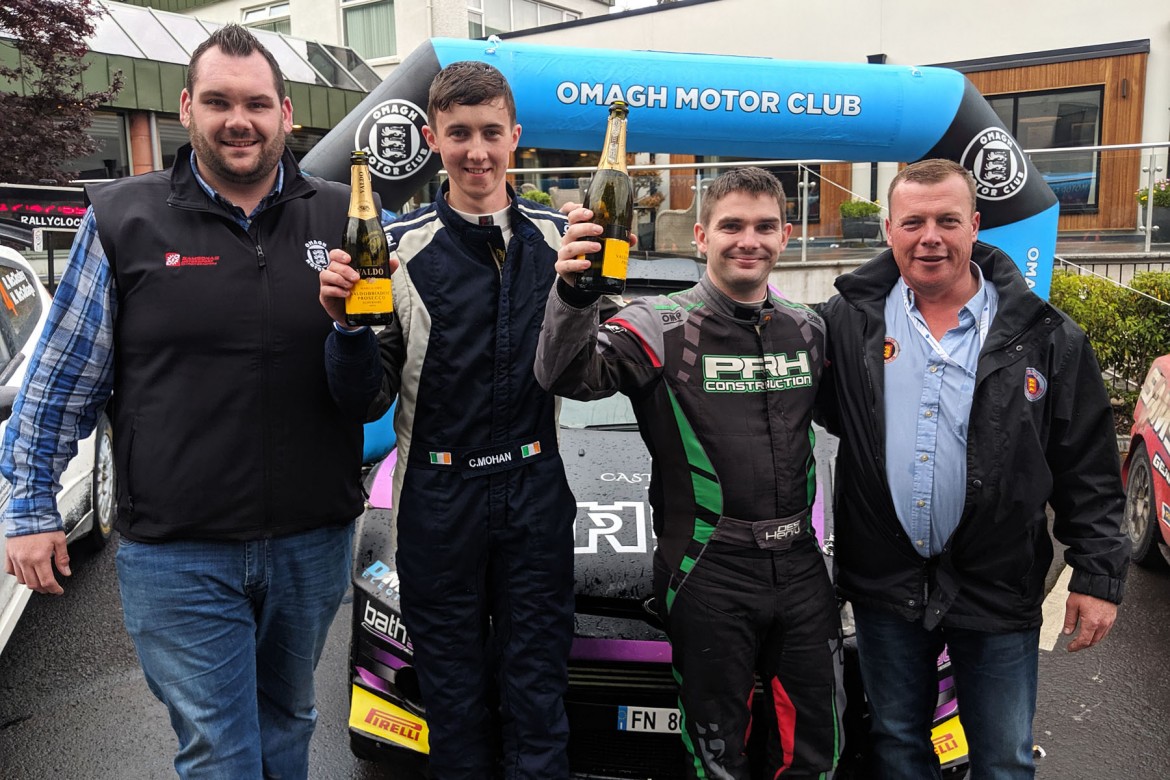 Based in the forests near Omagh, Henry struggled to match the pace of his rivals during the early stages as he was running first on the road  – a disadvantage for the Fiesta WRC pilot as he lost time sweeping away the loose gravel. He was as low as sixth overall after the opening two stages of the Omagh Motor Club organised event.

Instead, the men of the moment were Lithuanian visitors Martynas Samsonas and Mindaugas Varza. Driving their four-wheel-drive BMW E36, they were fastest from the outset, astounding their rivals with a string of fastest times.

As word filtered through of their speed, spectators surrounded their car in service to grab a closer look at the flying machine. After holding onto a seven-second advantage from Patrick O’Brien for much of the afternoon, Samsonas came under an increasing amount of pressure from both O’Brien and Desi Henry, who admitted he was going to go “on the attack” over the final loop of stages. And attack he did… Henry swiped nine seconds from his rival on stage eight to move to within striking distance. Another fastest time on stage nine put him at the top of the leaderboard and after a blast through the final stage, he sealed the deal with victory by eight seconds over the impressive Lithuanian BMW crew.

As for Samsonas, things started to go awry during the closing stages. He arrived at final service with steam billowing from his engine bay. Oil was spurting out of the top of his engine but his service crew quickly diagnosed the problem was the result of a blocked breather pipe. They managed to fix it in time for the final stage and Samsonas went on to seal the runner-up position.

Sadly for Patrick O’Brien and Stephen O’Hanlon, their day didn’t go as planned. They were in the thick of the battle for victory on what was their first outing with a Fiesta R5 but their turbo expired on stage eight, putting them out of the rally and dashing any hopes of a podium result.

Joining them at the sidelines was former Northern Ireland champion, Connor McCloskey, who was forced to pull out after rain started pounding the stages. The wipers failed in his Impreza WRC, making it too dangerous to continue. Donall Sweeney and Dean O’Sullivan also retired during the closing stages of the event when they overturned their Evo on stage seven. Thankfully, neither crew member was injured.

As crews fell by the wayside, others took advantage and climbed the leaderboard. Niall McCullagh and Ryan McCloskey, who had been among the front-runners all day, arrived home delighted with third overall after an early misfire problem was diagnosed to be a faulty boost valve. They kept their noses clean to secure the final podium spot in front of Conor McCourt and Caolan McKenna who lost a bit of time at a chicane during the morning.

Martin Cairns, Jock Armstrong and Stephen Wright all entered the final stage tied for fifth overall but it was Armstrong who went on to claim the position. The Scot and his rival, Cairns, both set the same time on the final test but Armstrong got the nod on the tie-break – he was the faster of the two (by one second!) over stage one.

He could have been even higher up the order only for a spin earlier in the day that saw him lose precious seconds. “The stage times were too tight for that nonsense!” he admitted.

Martin Cairns and Peter Ward had a clean drive aboard their Fiesta WRC to seal sixth while Stephen Wright dropped two seconds on the final test to finish seventh. However, that didn’t affect his McGrady Insurance N.I. Championship campaign as he still claimed second-placed points behind Desi Henry, who was the only other registered driver in front of him.

“I feel we’re still lacking a bit of experience on gravel,” Wright said. “But I got a bit more confident as the day went on.” Lithuania’s Martynas Samsonas and Mindaugas Varza on the stage one start line in their BMW.

Importantly for Wright, he finished ahead of both Derek McGarrity and Derek McGeehan who are all vying for the title. In eighth, McGarrity and navigator Paddy Robinson struggled once again with a persistent misfire in their Fiesta, something which they are struggling to diagnose.

“You’ve no idea what we’ve been through to try and sort it,” a disappointed McGarrity said. “M-Sport has looked at it but we still can’t find the source of the problem. If I short-shift, it only really affects us when flat out in fifth and sixth gear but it still cost us time.”

As for title rivals Derek and Mark McGeehan, they had been trading times with their rivals despite a difficult start to the day that saw them having to slow down and virtually come to a stop in hanging dust. Unfortunately, a spin that cost them around 10 seconds really dented their chances and they eventually finished just outside the top 10 behind both Marty McKenna and Niall Henry.

In the two-wheel-drive battle, Adrian Hetherington and Shane McGirr had a real ding-dong battle all day. It was Escort versus Starlet and going into the final stage, the two titans were on exactly the same time!

However, only one crew could win and it was Hetherington who pulled out all the stops on that final three-mile test to secure the category trophy by three seconds. He and navigator Gary Nolan were over the moon at the finish, while McGirr and Denver Rafferty had to settle for second.

With two rounds of the McGrady Insurance Motorsport UK Northern Ireland Rally Championship remaining, the series is really heating up with a handful of drivers still in with a chance of taking the overall crown. Stephen Wright, Derek McGeehan, Derek McGarrity and Desi Henry are all in the mix. October’s Tyrone Stages Rally, which takes place on 19 October, is going to be another thriller!