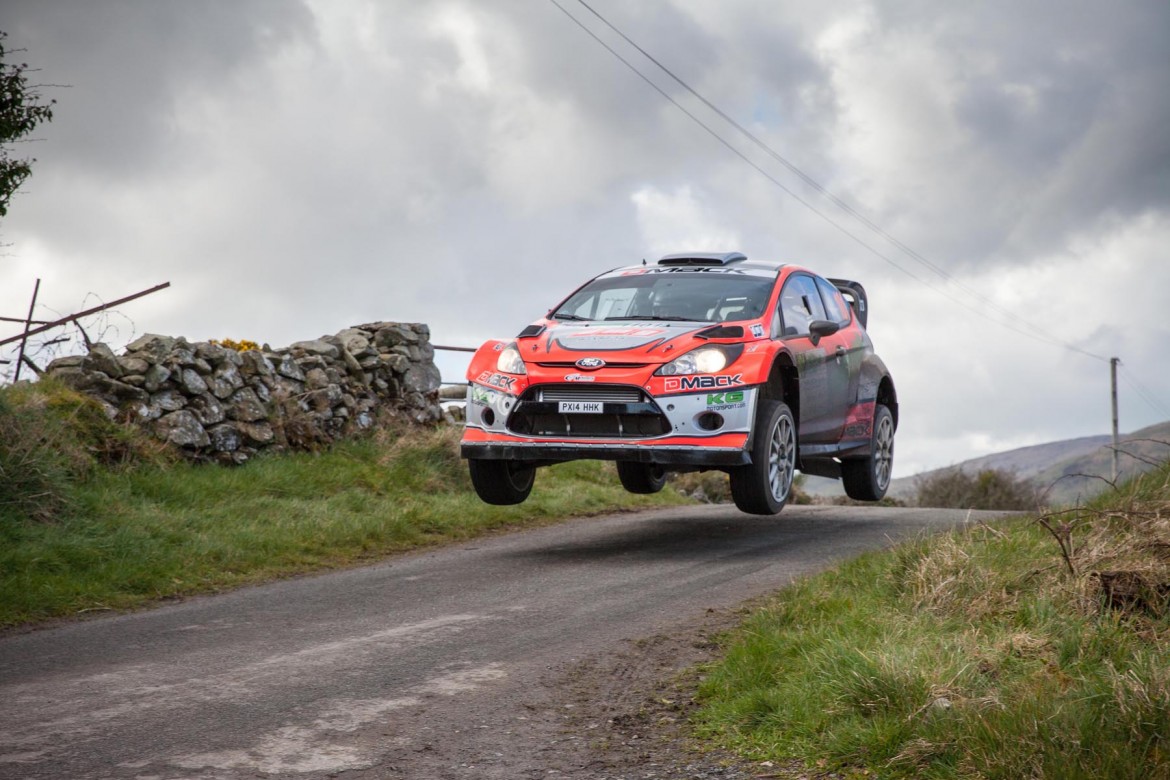 Derek McGarrity and Barry McNulty in their Fiesta WRC took a convincing victory on the Circuit of Ireland National Rally, round two of the MSA ANICC McGrady Insurance Northern Ireland Rally Championship at the weekend. The two day closed road event traversed some revered stages such as Glendun, Torr Head and Hamiltons Folly and was running behind the ERC, BRC & ITRC. It provided a stern test for the N.I Championship runners, including the winner.

“It was a difficult rally” commented the Glengormley driver. “To be honest when I saw the entry with the lack of other WRC cars in the mix I tried to change my entry into the International event, but it was just not possible to do that despite everyone’s efforts. We headed for the National but it was tough from the word go, as we still had problems with the car, and the condition of the road after the International section with mud being pulled out was worse than we expected. Derek McCGarrity on The Glens stage

We had an engine problem on the last stage at Kirkistown and it affected us also at the weekend, despite the engine having been sent away. On the stage three lag the car started to melt plugs, and misfire again badly, dropping off cylinders, which really affected us on the long Glens stage. It was a matter at the weekend of keeping the lag down to position one, and short shifting the car over the rally. We got to the end and completed the rally using only six second hand tyres. It was good to finish but I enjoyed it more last year when we had the likes of Kenny McKinstry and Declan Boyle in similar cars.” Ollie Mellors on The Glens in his Proton Satria

Slotting into second overall where non-championship runners, Ollie Mellors and Ian Windress in their Proton Super 2000, with two-wheel drive winner Wesley Patterson in his 2.5 MK2 Escort, a fine third. His only real drama was bouncing off a hedge on the Bucks Head stage. “I was lucky enough on that one” said the Lisburn driver. “It was a four left over crest. It was loaded with mud and we climbed the bank. Other than that however we had a great weekend, and I really enjoyed the Saturday stages and the race with Ollie Mellors.”

Other two wheel driver runners weren’t so lucky. Frank Kelly’s engine failed soon after stage one, both Keith White in his MK1 Escort and brother Rodney in his Sunbeam retired with differential failures whilst running strongly, and Paul Killen was another to succumb to the mechanical mayhem after setting great times on his home stages.

Camillus Bradley and Crawford Henderson’s controlled drive netted them fourth, ahead of Scots visitor Donnie McDonald in his Group A Evo 9, who recorded a fastest National time. Alastair Cochrane and Ian Kidd brought their 2 litre MK2 into sixth and first in class six, with Waterfoot’s seventh in is slightly battered 2.4 Escort, revelling in his home stages on day one.

Declan McNaughton in his rather second hand looking Escort

A collision with the bales on the treacherous Newtownards town stage, and then a broken exhaust manifold on day two dropped him down from fourth to seventh. Eighth was Welshman Jamie Jukes in his unusual Mitsubishi Mirage R5, with championship sponsor Fintan McGrady, having a great run in his 2.5 MK2 Escort to take ninth.

Tenth was Banbridge’s John Devlin in his modified Talbot Sunbeam, with Ballycastle’s Colm McFall taking Group N in fourteenth overall. Clive Kilpatrick had led Group N until a mechanical failure on stage thirteen, and Simon Woodside who was second after day one, retired on the Saturday’s opening Bucks Head stage, as this tough rally was designed to test man and machine. Round three of the McGrady series is on gravel on 7th May for the Magherafelt Motor Club’s Tour of the Sperrins Rally.

To keep up to date please check out the NIRC Facebook page-http://www.facebook.com/nirallying and check out www.anicc.org.uk for the series regulations and latest points. Rally results available onwww.rallyscore.net

NOTHING STOOD IN THE WAY OF MCGARRITY ON HIS WAY TO WINNING THE NIRC SECTION OF THE CIRCUIT was last modified: April 12th, 2016 by Graham
Circuit of Ireland Rallyirish rallyingderek mcgarritymcgradey insuranceNorthern Irelandnorthern ireland rally championshipTHE CIRCUITusedcars ni
5 comments
0
Facebook Twitter Google + Pinterest

I hate my life but at least this makes it belrabae.

You and me both, Karen. But hey, we shouldn’t expect ourselves to eat perfectly every time, every moment of the day (at least I don’t) We just have to pick what works for us. I’m a firm believer in that.

The RM at H who sold us the product also did not want to come out to speak to us when we lodged the complaint. Its a total contrast when he came pestering us to stop depositing our $ in FD & go listen to his lies.Despicable!

Well, yes, we do have that – it only made the problem worse, because it reinforced the notion that you can go back in time. It only works with shows that are also available on demand.

I can't even answer that question. There are just to many. I love all of Larissa's books… Hoping Reseph will take the lead by the end of the year. AshleySmartmouthtexan(at)hotmail(dot)com