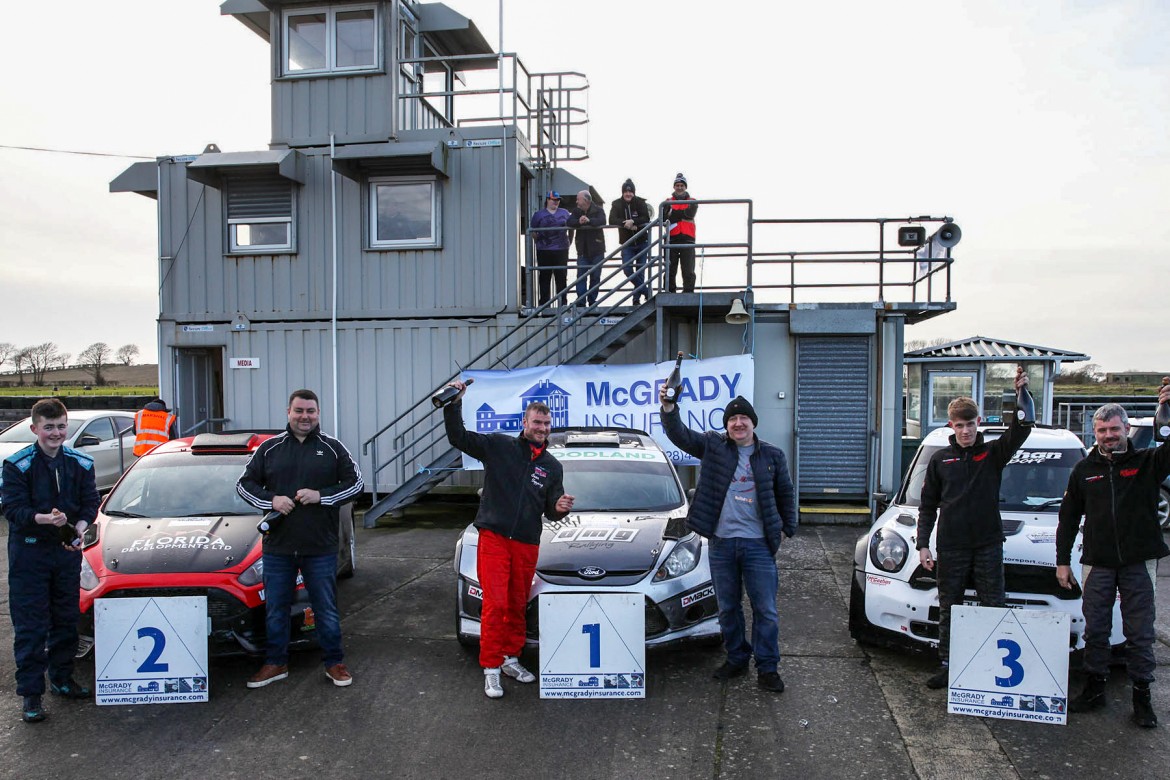 It was a difficult day for competitors at Bishopscourt Race Circuit as mixed weather conditions made tyre choice difficult at the County Down venue. However, the Glengormley driver led the event from start to finish, eventually claiming the win by 13.4 seconds from Mark Massey and Eathan McColgan.

“It’s fantastic to get a good finish here which gets our championship back on track,” McGarrity said. “We had a fraught enough rally with some silly mistakes and we caught cars on some stages which cost a bit of time.”

“The weather made it even more difficult but that was the same for everyone,” he added. “We were also running Mark Massey’s car so his result was an extra bonus.”

The event started dry but slippery with McGarrity emerging from stage one with a six-second lead. He continued to set fastest times over stages two and three but then the rain arrived which mixed up the field.

Derek and Mark McGeehan held an early second position but they dropped to third after they selected the wrong tyres and struggled with some mechanical issues during that wet fourth stage. “We went out on a slick tyre which was the wrong choice,” McGeehan revealed. “Then the paddle change stopped working so I had to manually change gear. It was a disaster.”

That dropped him to third overall while Mark Massey and Eathan McColgan revelled in the wet conditions. They powered to fastest time on stage four, placing them second overall.

“It’s only my second rally in a left-hand drive car and with a sequential gearbox,” Massey said after the test. “I’m starting to get used to the car and we have good tyres on.”

As his confidence grew, so did his pace and he went on to secure second overall behind rally winner McGarrity.

Meanwhile, Derek and Mark McGeehan managed to hold on to the final podium position in their Mini WRC. The father and son crew claimed third overall for the second event in succession, placing them in a strong position in championship terms.

Stuart Biggerstaff, who is the youngest ever Northern Ireland Champion, struggled during the early stages. He was a bit rusty but the cobwebs were quickly swiped away and he claimed a fastest time on stage five.

Having been seventh overall after stage one, the Dromara man and navigator Garth Neill climbed up to fourth by the finish but they were lucky to secure the position after their gearbox cried ‘enough’ on the final corner. They coasted over the line and still set second fastest time but had to be pushed away from the final time control.
Stephen Wright was the championship leader after his round one victory but he had a testing day aboard his Ford Fiesta R5. He knew something wasn’t quite right with his car over the opening stages and later discovered it was in front-wheel drive.

“It’s not enjoyable to drive,” Wright said. “I can’t get traction on the front coming out of corners and then when you try to brake, she tries to spin.” His service crew managed to trace the problem and his car was restored to four-wheel drive, although he didn’t have a working handbrake.

“There’s a cylinder that disconnects the drive to the rear wheels when you pull the handbrake and it had seized,” he explained. “We had to cope with that for the first two stages.”

With the car back on song, Wright and navigator Gregory McQuillan set some fast times to climb from a low point of seventh overall into fifth by the finish.

Paul Barrett and Mo Downey were perhaps the surprise of the rally in their Ford Fiesta R5. It was Barrett’s third time in the left-hand drive car and only for a couple of silly mistakes, he could have finished higher than his eventual finishing position of sixth.

“We spun on stage four and lost about 10 or 15 seconds,” Barrett revealed. “I went out on wets which were well worn but they were the right tyre. It was just a bit slippy. I also had a bit of an overshoot on the final stage but I’m happy enough and I’m delighted with our pace.”

Outside the top six, Kenny McKinstry and Conor Duffy had a trouble-free run to seal seventh in their Impreza WRC from Kevin Barrett and Sean Mullally who enjoyed their day.

Scotland’s Nigel Feeney and Phil Sandham took ninth in their Mini WRC on what was their first visit to the venue. They played with their suspension setup during the day and only for a spin, they could have finished higher.

Completing the top 10 were top two-wheel drive exponents James and Heather Kennedy. Their tussle for the 2WD spoils went right down to the wire with the crew eventually claiming the win by one-tenth of a second! 1st 2WD by one-tenth of a second: James and Heather Kennedy. picture:Jonathan MacDonald

Kyle White and Alan Purdy had entered that final test as the category leaders having fought their way back up the order following some earlier delays. They entered the stage with a lead of 4.7 seconds over Kennedy but then the heavens opened while the crew were sitting on the start line.

“It started raining when we were on the start line,” a despondent White said. “I think we lost maybe 10 or 15 seconds.”

Rival Kennedy was also caught out in the rain but he was already half way around the stage. He pushed as hard as he could and was almost five seconds quicker to win the category by the slenderest of margins!

John Devlin and John McCarthy picked up third overall among the two-wheel drive crews. They led after the early stages but dropped back after a spin and had to be content with third ahead of Drew Stewart and David White.

In the Group N category, Colm McFall and Ronnie Craig sealed the victory aboard their Mitsubishi Lancer. The crew discovered after the previous event that they had a broken anti-roll bar. With the problem fixed, they went on to win from Chris McGurk and Liam McIntyre who had a few excursions during the day but survived to tell the tale.

The same can’t be said for Paul Britton and George Tinsley who were hopeful of picking up a good result. Their car caught fire at the end of stage two and a mad panic ensued to find enough fire extinguishers to put the fire out. Marshals, rescue crews and other competitors all rushed to their aid and thankfully the car was saved.

Round three of the McGrady Insurance Motorsport UK Northern Ireland Rally Championship takes place on 6 April with the Maiden City Stages. More information will be revealed in the coming weeks at www.nirallychampionship.com.

At this time I am ready to do my breakfast, after having my breakfast
coming again to read other news.

What you said made a ton of sense. But, what about this?
suppose you composed a catchier post title? I mean,
I don’t wish to tell you how to run your blog, however what if you added a title that makes people
want more? I mean McGarrity's Campaign Back on Track with Bishopscourt Rally Victory!

| Used Cars NI Blog is a little vanilla. You might peek at Yahoo’s home page and see how they create article headlines to get viewers to click.

You might add a related video or a pic or two to get readers excited about what you’ve got to say.
In my opinion, it might make your blog a little livelier.