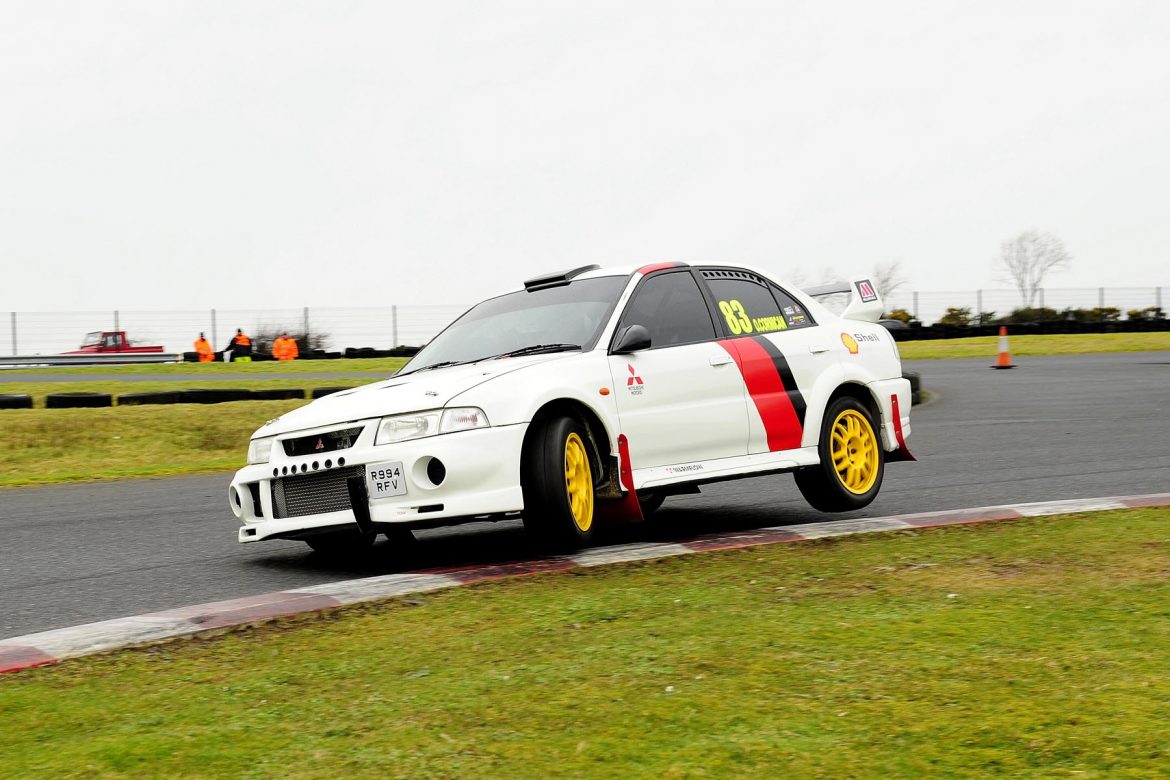 With this year’s leap year adding an extra day to February, this event started the season unusually early in February, but none the less the North Ulster Car Club managed a very respectable entry of 65 competitors.

Amongst the 65 starters were a lot of new drivers, and some new driver and car combinations. By Saturday morning the championship had a whopping 115 registered competitors, of which there are a lot of new names and faces. This is great to see and bodes for a superb season ahead.

The morning started off, fresh but dry and with drivers reporting a shortage of grip in the first practice runs. However the elusive grip seemed to appear as the day went on and practice went off relatively smoothly, although there were a few drivers who reported some uncharacteristic mistakes.

Due to the weather conditions, and fears of snow and rain being forecast for the afternoon the Clerk of the Course Richard McFaul decided early on that he would start first practice and not stop until the last car had completed their third timed run. This proved to be great decision by the CoC and his team of marshals who kept the event rolling on like the Portrush Flyer at full steam.

With both Practice runs completed in the dry, and with reports of Mr Grip making an appearance it was straight into the first timed run. With some drivers keeping a close eye on the weather there was a huge queue of cars in paddock assembly all jostling to get as early a run in as possible before the , now thick black clouds, decided to give the area what for.

Oliver Cormican Managed to make a real advantage of the changing weather conditions and left the line like a man on a mission. Oliver’s level of Commitment round the bottom of the circuit where I was spectating from had to be seen to believed as he literally drove like a demon in pursuit of a good run.  For Oliver this paid off and he managed a 111.5 sec run which wasn’t to be beaten all day. Steven Gault lined up in a now damp circuit to complete his first run and managed a belter run of 112.52 secs a mere 1 second behind Oliver who had 4 wheel drive to assist him as opposed to Steven and co who were trying to get a lot of power down through the rear wheels only. Last year’s Overall Sprint Champion Adrian Pollock didn’t start his season off as planned and was third overall after the first timed runs. A mere 0.7secs behind Steven.

After the first timed runs the weather changed and as well as some rain we had snow, more wind and temperatures plummeted even further. Some competitors, for various reasons opted not to complete a second timed run and when you see the times the second run was slower for all bar 5 drivers. The most interesting of these was David Hawthorne who managed to take almost 5 seconds out of his first time run in the wet second run. For those of you who know David, this is not surprising as he drives to the limit no matter what the conditions, so much so in fact that sometimes I don’t think he knows it’s raining, cold, slippy, greasy or whatever the current conditions dictate.

With it all to play for in the third timed run Oliver Opted not to run, obviously quite happy that his class winning run was not going to be beaten, and not expecting to be so far up the leaders list. Steven Gault had all to play for and boy did he commit to the challenge. Steven blasted his Reynard to his fastest run of 112.41 secs a mere 0.86secs behind Oliver Cormican. With Adrian Pollock not completing a second timed run, he had a lot of time to do whatever Adrian Pollock does when the pressures on, and he lined up to start with only 1 thing in mind. He left the line fantastically and was well on the way for another of his blinding last run times until he managed to slide off the circuit and that was that.

So after a superb but cold day Oliver Cormican took his first ever outright win in the sprint Championship. This was an extremely popular win amongst the drivers as Oliver is a very popular member of the paddock who can always be relied on for a bit of craic and a very witty comment. Second went to Steven Gault in his Reynard with Adrian Pollock taking third in his Dallara.

Afterwards I contacted Oliver to congratulate him on the win, and he suggested that the rest of the season should be cancelled due to Corona Virus, and if so he’d be delighted to host his championship winning Season Awards party in his garage!!

As well as the main event there are also 5 other sub categories which were fought so hard for on Saturday. I will start with the Modified Category. Oliver Cormican of course was fastest modified car and had a mere 3.8 sec advantage over local rally man Drew Stewart. Drew, as many of you will recall is no stranger to the sprint paddock after having a successful sprint career in a Maguire mini before deciding to join the dark side and go rallying where he has also had some success of late. I suspect that after Saturday you may see Drew out again at future events.

He also hinted about bringing the Mini out so watch this space…. Third in the modified battle went to Alan Roddy who never fails to drive the life out of his lovely little saxo. Alan finished a mere 0.06 secs behind Drew so it was close. Had Alan not had that extra sandwich at lunchtime it may have made all the difference?

The road going class, as always was a battle royale with Crawford Ewing topping the timesheets in his little clio. Crawford is also listed as fourth overall in the time sheets with a run of 113.61secs which is a fabulous result for him. Second in the timesheets for the road going category went to local man Andrew Robb who once again steered his BMW round the circuit in 117.53 secs in similar style to Ken Block but with a heck of a lot more speed.

Sadly his father Alfred Robb wasn’t out to compete at this event but I did hear a funny story of him going to hospital and spending more time trying to convince a surgeon to come sprinting than he did listening to what the surgeon was saying. Once a sprinter, always a sprinter….. Third in the Roadgoing battle went to Adrian Mulholland who debuted his new RS2000. Adrian’s run of 121.18secs was is only 3.61secs behind Andrew.

In the new for 2020 Specialist Cars Category David Hawthorne once again proved to be the fastest Hawthorne as he took category honours by a mere 1.08 secs from fellow class 7 man Paul Hamill with Steven Hawthorne taking third in the category a mere 0.84 secs behind Paul. Interestingly the top 3 of this category were separated by only 1.92 secs which shows how close this will be at the end of the year.

Also new for 2020 is the Heaslip Ladies Challenge Trophy. This award was donated by Jimmy Heaslip who took 3rd in class 10 in his Escort. Jimmy, obviously isn’t competing in this award so he left it to the Ladies to battle this one out. This award is scored to reflect how the ladies compete in relation to their class piers rather than against each other. This way it will not necessarily go to the girl in the fastest car.

After a fine battle on Saturday Sheryl McBride takes early bragging rights and a 6 point haul to the top of this award table. Emma Campbell is second with 5 points and Olivia Coulter finished 3rd with 4 points after having an awful day. Of the 3 females competing Olivia Coulter was actually fastest with a 144.1 sec run, Emma was second fastest with a 148.6 sec run and Sheryl third on a 155.85 sec run. With Kathy McDade and Catherine Donnelly both opting to avoid this event the scores are fairly close at the minute and I predict that it will remain close as the season progresses, right to the end.

The last completion on Saturday was the unofficial Fastest Mini in the West competition. John Golden takes the honour in the Midas finishing 1.11secs ahead of Karl Johnston in the mini. Gary Milligan was a lonely third 9.65 secs behind Karl. For those on Facebook, check out the video posted on the NI Sprint Championship facebook page of Karl exiting the horseshoe in the mini!!!! Well worth a watch and fair play Karl!! Sadly Gerry McGarrity was unable to compete on Saturday so was unable to mix it amongst the mini men and torture them all with banter throughout the day. Get well soon Gerry and we all can’t wait to see you back out. The paddocks mighty quiet without you!!

The next and second round of the S W Adair tyres Northern Ireland Sprint championship takes place on 14 March at Kirkistown Circuit. This event will also be part of the Irish Speed Championship with the Irish Speed Championship hosting 2 rounds at Kirkistown that weekend on the Saturday and the Sunday. This event promises to be a bumper weekend with the fastest cars in Ireland congregating at Kirkistown for bragging rights. Rumour has it that Paul O`Connell will be bringing his World Series Car to play. For those who are interested the Circuit Restaurant will be open for food after the event and into the evening and the bar will also be open with some form of Entertainment as well. 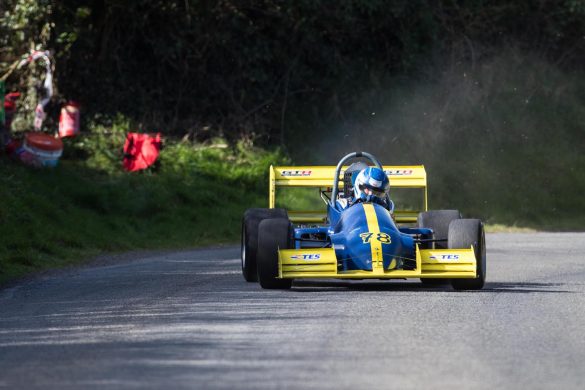