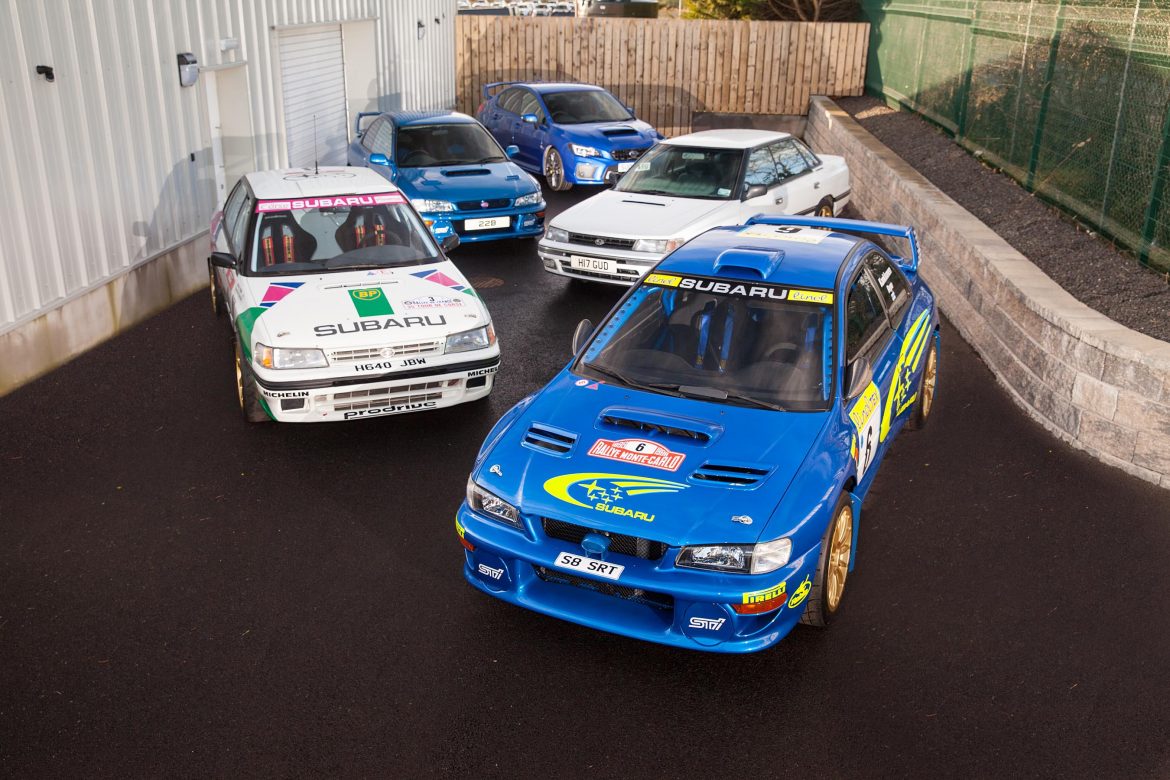 Some things in life are simply meant to go together in harmony. Strawberries and cream, fish and chips, maybe even rum and coke! In rallying, however, Subaru will forever be inextricably linked to the sport…

The combination of that flat-four burble and Colin McRae’s maximum attack driving style not only helped Subaru power to the top of the sport but they also helped the manufacturer make an indelible mark on the hearts and minds of rally fans around the world.

When Subaru burst onto the rally scene with its Group A Legacy at the turn of the ’90s, it was a little known marque. Sure the company had entered events with earlier models of Subaru during the ’80s but success was limited. That all changed with the development of the Legacy and a relationship with Prodrive.

Around the same time, Colin McRae was busy making a name for himself during the early stages of his career. Having won the 1988 Scottish Rally Championship in a Vauxhall Nova before using a Sierra Cosworth to finish fifth at Rally New Zealand in ’89, he was one of Britain’s brightest young prospects.

Prodrive’s Dave Richards decided to give the Scot an opportunity behind the wheel of a Group A Legacy and McRae duly delivered. He claimed the 1991 and 1992 British Rally Championships titles, taking victories on more than 10 events during that two-year period.

McRae and navigator Derek Ringer were subsequently promoted to Subaru’s World Championship team in 1993 and they gave the manufacturer its first WRC win at Rally New Zealand. Two years later, they were World Rally Champions in the Legacy’s successor – an Impreza.

Colin McRae was the only driver to reach the highest echelon of the sport for Subaru during the ’90s but there were plenty more world class drivers during that time who set the stages alight.

When McRae first joined the WRC team, his team-mates included Ari Vatanen, Markku Alen and Hannu Mikkola – all former world champions. Later, when the Legacy was permanently superseded by the Impreza in 1994, former champion Carlos Sainz joined the team.

Other familiar names became associated with the brand including Kenneth Eriksson and Piero Liatti. They were all world class drivers who helped to create some special Subaru memories on stages around the world.

In 1999, McRae moved to Ford leaving a gap in the Subaru team. Richard Burns made the move from Mitsubishi to join Juha Kankkunen but it was Burns who proved to be the leading light. A handful of rally wins took him to second in the title race, a feat he repeated the following year before becoming World Champion in 2001.

Also in 2001, Petter Solberg had replaced Kankkunen in the team. Fast-forward another two years and Solberg secured the 2003 championship title while Tommi Makinen called time on his driving career after two years with Subaru.

While Solberg was overjoyed with his ’03 success, Martin Rowe took an Impreza to the Production WRC title that same year. That was the catalyst for five consecutive wins for Subaru drivers in the Production series, with Niall McShea, Toshi Arai and Nasser Al-Attiyah all emerging victorious, providing yet more impressive success stories for Subaru at world level.

Subaru’s success on the stages hasn’t been limited to the world scene. Far from it. Part of the reason that the manufacturer became so popular with fans around the world is owing to the affordability of their performance road cars. Fans could buy a Legacy or Impreza and pretend to be their rally heroes!

Another reason for the car’s popularity is thanks to the large numbers of club competitors who opted to make the switch to Subaru. A mammoth amount of success has been enjoyed across the UK and Ireland.

Bertie Fisher was among the first to bring the mount permanently to the Emerald Isle. Having struggled to match Colin McRae’s pace at the 1991 Circuit of Ireland, he emerged with a Legacy in 1992 and went on to claim another Irish Tarmac title.

Fisher became the Subaru benchmark in Ireland and that ultimately compelled his rivals to up their game and their machinery, helping to create a true spectacle of Irish rallying. He was always among the first with the latest Subaru machinery from the Prodrive stable, firstly with a Legacy and later a variety of blue and silver Imprezas.

Other familiar names who have campaigned Subarus on a regular basis over the years include Kenny McKinstry, Mark Higgins, Melvyn Evans and Derek McGarrity, to name just a few. Such is the popularity and success of those who opted to compete in a Subaru, it’s simply impossible to name all of them!

Subaru has inspired a lifetime of memories for many rally fans. Those of us that have witnessed some of the world’s best drivers take the dirt-munching monsters to their limits are truly fortunate to have lived through this golden era of rallying.

We’re now in the midst of having much more technologically advanced rally cars at the top level of our sport but that flat-four burble of the Group A Subarus still remains as one of the most popular sounds in rallying. Long live Subaru!

The image that opens this article is probably the only chance you will get of seeing the first of the Prodrive GrpA and WRC cars, pictured aside their homologation road editions, as well as the last ever performance edition Subaru in the UK, the WRX STi FE.

A heartfelt thanks must go to those who made it possible!

Words: JONATHAN MACDONALD/PaceNotes Rally Mag | Photos: GRAHAM BAALHAM-CURRY
[images must not be used in any way without prior written consent of the photographer]