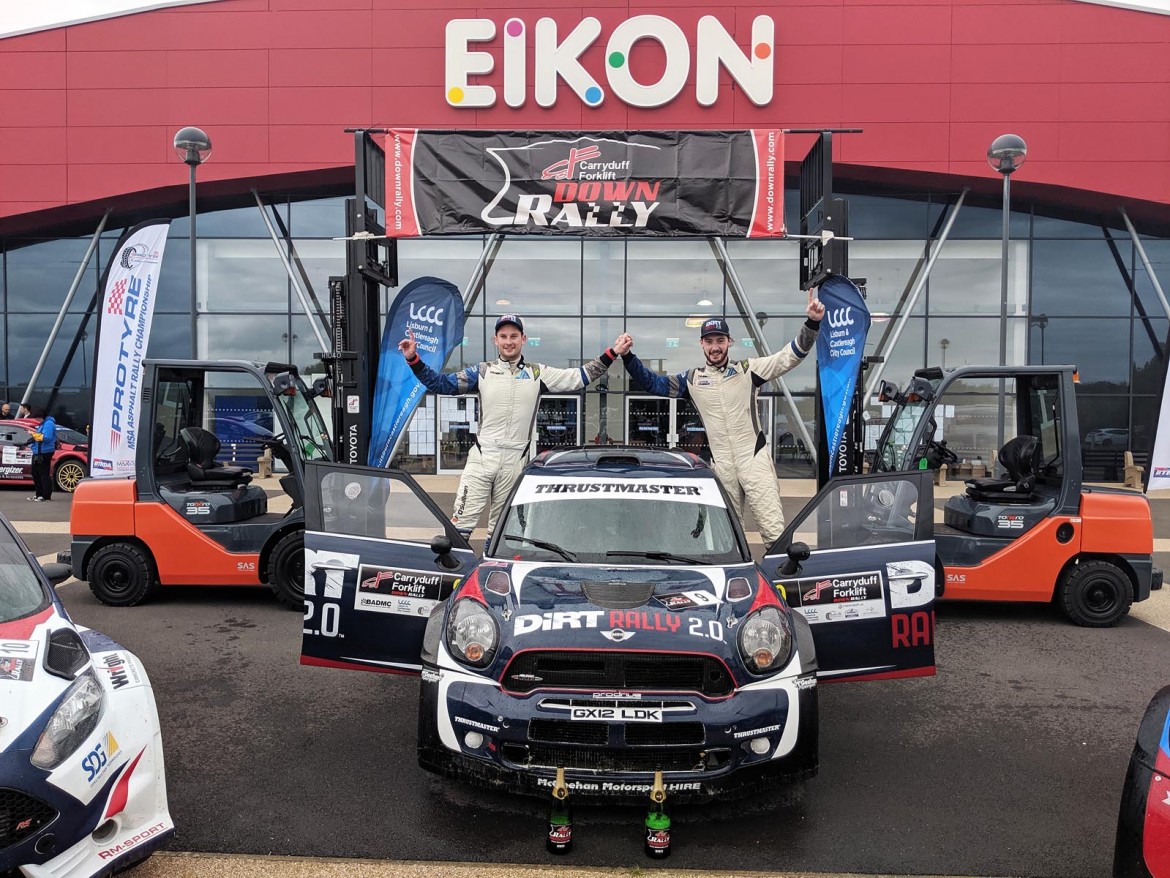 Co-driven by Noel O’Sullivan, the Fermanagh driver mirrored some of his success in the virtual gaming world by taking victory aboard a McGeehan Motorsport prepared Mini WRC at today’s County Down based event that was jointly organised by Ballynahinch and District Motor Club as well as Rathfriland Motor Club.

It was his first time driving a World Rally Car competitively and after using the opening miles to settle in, Armstrong quickly became a major contender for victory. He was fourth overall after the tricky opening stage before climbing to third after setting the fastest time through stage two. He was gradually building his pace and looked set to challenge for the lead during the second loop of stages when he got a puncture during the fourth stage. That same stage also saw second-placed Meirion Evans lose six minutes with a puncture.

Luckily for Armstrong, his time loss wasn’t as severe but it was still painful nonetheless as he dropped one minute, placing him at the bottom of the top 10.

The incident only made the Fermanagh man more determined and by the time crews arrived back at service after stage eight, he had set another four fastest stage times and clambered his way back up to second overall.

The chasing crew got the bit between their teeth for the final loop of three stages which saw Armstrong move into the rally lead for the first time after stage nine. Using the power of his Mini WRC to full effect, he consolidated his advantage over the final two tests to win the event by just over 20 seconds. “We didn’t expect to win at all,” Armstrong said at the finish. “It’s only my second rally in two years so the aim was to get a bit of ‘seat time’ in a World Rally Car. It’s something that I’ve never really had a lot of but I try to make up for it by making detailed pace notes which is what stood by us today.”

“Noel and I worked really well together and the car worked really well too,” he added. “I’m aiming for a full rally campaign next year and hope to do something a bit more structured. Certain individuals are helping me do that and it’s thanks to them that I’m here today as well as Dirt 2.0 and Thrustmaster.”

Stephen Wright and Liam Moynihan had to settle for second overall but in doing so, they claimed maximum McGrady Insurance N.I. Championship points. Wright had led the series after winning the opening round but he subsequently missed an event so the result puts him back on target for a 2019 title challenge.

“Entering the next round of the championship is definitely a lot more tempting now!” Wright admitted. “I like gravel and the Lakeland Stages is in the forests so I’ll see you there!” In third position, Daniel Harper and Chris Campbell were the best of the Protyre Motorsport UK Asphalt Championship crews. Their Mini WRC never missed a beat as they powered to another podium position, finishing with a reasonable cushion over the rest of the chasing pack.

The battle for fourth overall raged right through to the finish with four crews in with a shout of the award. In the end, Melvyn Evans and Aled Davies secured the position from Derek McGarrity and Paddy Robinson, with Steve Wood and Keith Moriarty sixth.

Stuart Biggerstaff and Anthony Nestor had also been right in the hunt but they dropped out of contention with power-steering troubles on stage nine. The crew tried to fix the problem but it was to no avail and with the possibility of the steering completely seizing, they opted to pull out of the rally for safety reasons.

It was a real shame for the former N.I. champion as he raised a few eyebrows on what was his debut with a left-hand drive car. He had hired the Fiesta R5 from McKinstry Motorsport and despite the final outcome, he thoroughly enjoyed the day, as evidenced by his beaming smile at the finish of every stage!

As for McGarrity, the result gives his N.I. Championship title campaign a welcome boost as he continues to play catch-up after his round one retirement. He was left a little bit disappointed that a wrong tyre choice and a broken anti-roll bar thwarted a potential challenge for outright victory but he is very much among the main contenders for the 2019 championship spoils.

The bottom half of the top 10 also featured the father and son team of Draperstown’s Derek and Mark McGeehan. It was navigator Mark’s second closed road rally, and only his second time reading pace notes, so his father Derek was as proud as punch of his efforts at the finish. They are another crew that are in the hunt for the 2019 N.I. Championship title.

Meanwhile, last year’s winner Jonny Greer was left despondent after his retirement. He blitzed the opposition on the opening stage of the event when he went 10 seconds faster than anyone else and when both Meirion Evans and Jon Armstrong hit trouble on stage four, it looked as though the Carryduff based driver was on course for another win.

However, it wasn’t to be as one stage later, suspected gearbox troubles forced him and navigator Kirsty Riddick out of the rally.

In the battle for two-wheel-drive honours, Damian Toner and Barry McParland put in a scintillating display aboard their Ford Escort MkII. They were never outside the top 10 and eventually powered home to a seventh-placed finish with a comfortable margin over their two-wheel-drive rivals. Even burning his hand while working on his car failed to dampen Toner’s day. Camillus Bradley and Crawford Henderson claimed second in the category after early second-placed holder Wesley Patterson went out of the event with a broken crown wheel and pinion.

“It did one event too many!” Patterson said.

That left Bradley in the runner-up position ahead of the class six Escort belonging to John Devlin and John McCarthy.

Round five of the McGrady Insurance Motorsport UK Northern Ireland Rally Championship will see a switch from tarmac to gravel as crews head to County Fermanagh in September for the Lakeland Stages Rally.

The series is beginning to heat up and a three-way fight for the crown is developing between Derek McGeehan, Derek McGarrity and Stephen Wright. We’re at the midpoint of the season so the next event could be crucial.

More information about the championship can be found online at www.nirallychampionship.com or on Facebook at fb.com/nirallying.