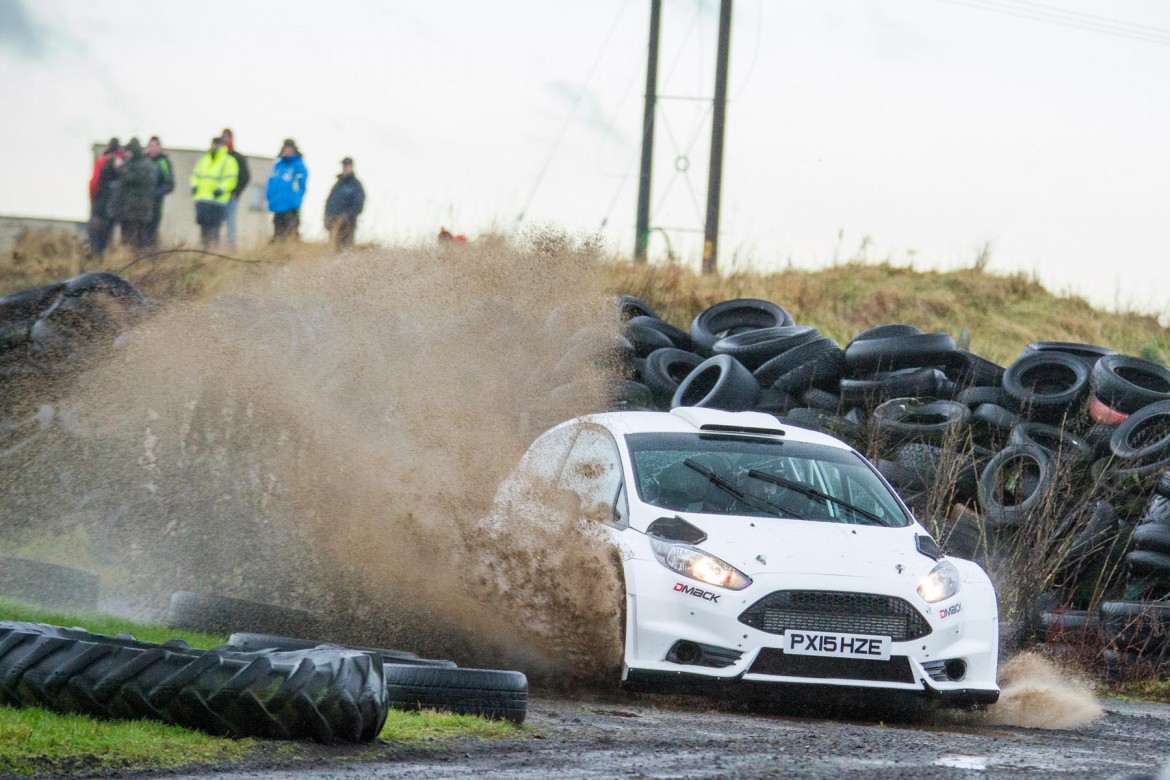 Kirkistown Racing Circuit on the outskirts of Portavogie has for years, played host to the New Years Stages Rally, usually organised by the 500 Motor Racing Club of Ireland the event is the season opener and as such tends to attract a decent entry and good spectator numbers with a few new cars out for the first time.

This year however things were different, the Ulster Automobile Club took the reins of running the single venue stage rally which would see six special stages in total using a mix of tarmac, gravel and concrete surfaces throughout its course.

With fifty starters, the clubman event was well supported throughout most of the classes and at the top of the entry list saw a trio of Ford Fiesta WRC’s a brace of Subaru Impreza WRC’s and a DS3 R5 so there was to be amazing battles all day.

On arrival at the circuit early on Saturday morning it was typically Kirkistown; cold and wet with a slight breeze and a brisk nip in the air that would constitute to a damp, muddy track with tyres that maybe wouldn’t get up to operating temperature as quick as drivers would hope. Spectator numbers seemed lacking compared to previous years, however this to me is no surprise mainly due to the Motor Sport Association’s rally safety farcical rules, forcing those who paid a hefty £15 entry fee at the gate, into viewing areas that would require binoculars to see any real action.

In fact one such punter commented after the event that the best action they were able to see all day was in the dedicated tyre warming area when drivers would come in and perform all sorts of antics to get heat into the tyres pre start line, this is not how rallying should be!

Anyway, after a lot of grumbling from a lot of folk it was back to what action they could see and any one of the six cars previously mentioned could have taken the win with Derek McGarrity coming to the event in his newly acquired Fiesta WRC as favourite while Kenny McKinstry was expected to be on the podium in his much bigger but aging Impreza WRC with its larger engine.

Connor McCloskey was always going to be an issue for these ‘old hands’ of the sport in his Fiesta WRC and was swapping seconds with McKinstry and McGarrity all day and the agility of the little Ford certainly helped him get ahead of Kenny at the end of the day to snatch second, though he couldn’t quite match the pace of McGarrity who took the win. With just less than 20 seconds separating the top three at the finish it was a tightly fought event that a simple overshoot or spin would have meant a very different result so each crew really needed to have their wits about them throughout this 2017 opener.

Perhaps the surprise of the day was from Mark Massey in a hired Impreza WRC as he finished 4th overall, however it was nearly all over (literally) for Massey on SS4 as he clipped a tyre, launching him onto two wheels and having seen a video I have no idea how the Subaru didn’t end up on its roof.

Massey is no stranger to a lesser spec grpN car and has a healthy trophy cabinet as testament to this, however it took a sterling drive in an unfamiliar and untested WRC car to nip past the very experienced Robert Woodside who had turned up in a hired DS3 R5. Woodside clearly had an absolute blast in the DS3, setting some great times and for most of the event i swore he thought he was driving his auto test MX-5 due to the shapes and angles he was entering and exiting the tight course.

The DS3 R5 crew definitely deserve their names on a ‘flamboyant driver of the day’ trophy! Richard Hall must also get a mention here for turning out an absolutely stunning classic Porsche 911 RSR and driving the door handles off it in the process, a sight and sound to behold.

The NI Junior Rally Championship for drivers under the age of 17, driving cars under 1000cc held a round alongside this event seeing four entrants, Sam Adams / Andrew Bushe took the win in their Skoda Citigo with Peter Beaton / Keny Foggo in a Peugeot 108 not far behind in second with the Volkswagen Up of Rory Byrne / James Byrne filling the final podium spot.

Class honours at the end of the event were rewarded at the prize giving with Class 1 going to William Herron / Geoff Patterson in a Mitsubishi Evo, any pressure eased when Kyle Orr retired on stage while Class 2 provided a fierce battle with just 9 seconds splitting the top three crews, Matthew McGaffin / Andrew McGaffin in an Evo 9 came out on top.

Colin Price / Mark Smyth controlled Class 3 from the start to take a comfortable win in their Vauxhall Corsa and a similar commanding drive Class 4 led Kyle White / Sean Topping to class victory in their Peugeot 208 R2. Class 8 saw Niall Henry / Aaron Johnston set fastest times on all six stages to take the class win by over 30 seconds in their Evo 10 whilst Class 9 saw Derek McGarrity in his Ford Fiesta WRC take the win by a mere 10 seconds.

Robert Woodside / Allan Harryman in a DGM Sport Citroen DS3 R5 happened to be the only R5/S2000 car entered and as such, all they had to do was finish the event to take class honours, which they done in a Ken Block inspired manner.