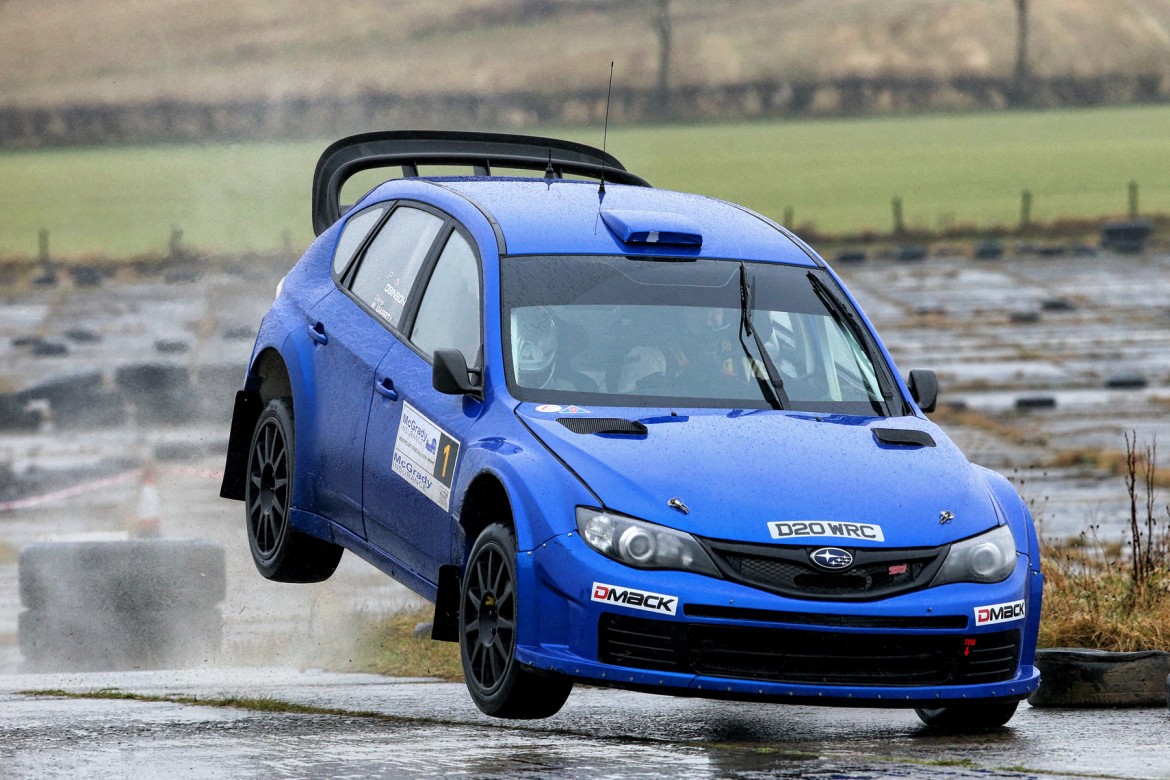 It was wet and wild at Bishopscourt Race Circuit on Saturday (10 March) as the opening round of the 2018 McGrady Insurance MSA Northern Ireland Rally Championship got underway in treacherous conditions.

However, Derek McGarrity and Paddy Robinson stayed cool, calm and collected to seal a commanding victory aboard their Subaru Impreza WRC…

While others flailed in the difficult conditions, McGarrity didn’t put a wheel out of place on any of the event’s six stages. He took a commanding lead of nine seconds after stage one and sprinted ahead of the pack to eventually secure his sixth consecutive McGrady Insurance Bishopscourt Stages victory by more than one minute.

“It’s great to win the event again,” McGarrity said at the finish. “Those were difficult conditions today but we didn’t make any major mistakes and kept out of trouble.” Peadar Hurson and Damien Connolly held an early second overall but their rally started to unravel when the rain started pounding the circuit on stage two. They had two 360 degree spins in their Fiesta WRC and unsure of what caused the incidents, they opted to retire.

“We had two big spins,” an exasperated Hurson said at the stage finish. “I don’t know what happened. It felt like we had a puncture or something.”

It later transpired that the crew had succumbed to a broken driveshaft. With their Fiesta WRC out of the running, Mark Massey and Niall Burns moved up to second overall in their Impreza WRC, just one second ahead of Connor McCloskey and John Rowan. Massey edged a few tenths further ahead after stage three and then his mechanics changed his gearbox as a precaution before heading into the fourth test.

Pushing hard to try to stay ahead of the former N.I. Champion, Massey spun during the stage and dropped to fifth, leaving McCloskey in second position. However, he couldn’t afford to relax as Alan Carmichael was less than four seconds behind in third overall.

By his own admission, McCloskey wasn’t really enjoying the difficult conditions. He dropped behind Carmichael after stage five and although he took a few seconds back on the final test, McCloskey had to settle for third.

“I decided to take it easy,” he admitted. “You could make a mess very easily in those weather conditions.” Crews line up for the start of a special stage

Instead it was Alan Carmichael and Ivor Lamont who claimed the runner-up position. They had some misfiring problems throughout the day and finished the event with a broken manifold but it was a job well done for the Mini WRC crew.

Mark Massey and Niall Burns recovered from their earlier spin to bring their Impreza WRC home in fourth overall while an impressive drive from Barry Morris and Declan Campbell saw them net fifth overall as well as top two-wheel-drive honours with their Escort MkII.

An equally impressive run was enjoyed by sixth placed Peter Bennett and Simon Jones. Not only was it 17-year-old Bennett’s first MSA event in his newly acquired Evo, it was one of his first experiences of driving a four-wheel-drive rally car!

James Laverty and Paul Hughes had a trouble free day aboard their Impreza to net seventh overall and first in Group N. Their only dramas came on the final stage when they caught another car which potentially cost them a couple of placings on the overall leaderboard.

“We got stuck behind a MkII Escort which then spun in front of us,” Laverty explained. “We had to stop so we lost a pile of time.” Smiling Scottish visitor, Rory Young, completed his first circuit-based rally in eighth overall with his Fiesta R5. He and Allan Cathers only decided to make the trip across the Irish Sea after a number of events that they had planned to enter were cancelled.

Two-times N.I. champion Denis Biggerstaff made a successful return to competition to net ninth overall. A couple of “big slides” and a sixth gear spin kept the Dromara man on his toes but he was happy with his result at the finish, despite forgetting to put his Impreza WRC into ‘stage mode’ on the final stage!

Kyle White and Sean Topping completed the top 10 and won class four in their Peugeot 208 R2. The crew struggled during the early stages when their car went into limp mode due to a wiring issue and then tyre problems thwarted their progress. However, the team managed to reconnect the wires and some new tyres gave them more grip as well as added confidence.

Just outside the top 10, Alan Smyth and Mac Kierans eventually finished 11th but they had been as high as fifth. Their Evo lost an argument with a trackside barrier on stage five which dropped them down the order. Gary Rodgers and Brian Crawford had a solid drive with few dramas to seal 12th and second in Group N while 13th placed Jonny Morrow and Frazer Mulholland were another crew that had been in the wars. A big overshoot on stage five saw them damage the front of the Evo which Jonny had borrowed from his brother for the day!

The all lady crew of Amy Cox and Caron McCormack didn’t put a wheel out of place and arrived at the finish in 14th overall while Brian McFall and Matthew McKenna completed the top 15 in their Evo 9.

Notable retirements included former N.I. champion George Robinson. At the end of stage two, he reported a worrying vibration coming from his new Ford Fiesta and it transpired to be a broken fan belt which put him out of the rally. Meanwhile, Banbridge’s Kenny McKinstry looked set to take a top 10 finish only for engine trouble to put him out of the rally midway through the final stage.

The battle for the Championship spoils will continue on 12 May with the Tour of the Sperrins Rally. More details will be announced soon on www.nirallychampionship.com.