At Kirkistown ‘ideal’ conditions for setting lap records are a dry track, cool air and a slight following wind down the start/finish straight. Of course, none of these will help you unless you are very, very close to the lap record anyhow, but on Saturday 31st August the Used Cars NI Sevens Challenge had all these ingredients in place for morning qualifying.

Points leader, Alan Davidson, had been in fantastic form leading into the August meeting. He had drawn out an 8 point lead in the table with two wins at the July meeting. The previous NI Sevens lap record was held by Ryan Magennis from 2012 at 1:03.043 (86.338mph), and although Alan had got close to Ryan’s mark, it had never been bettered. So, with a dry track, cool air, and a slight breeze tailing the cars down the start finish straight qualifying for rounds 10 and 11 of the Used Cars NI challenge began. Davidson immediately was on the pace, consistently lapping in the low 1:03’s. Towards the end of the session he had caught a more powerful Radical from the Roadsports A class and, despite a huge moment exiting the hairpin, managed to hang on to the tail of the Radical and get a crucial pull from the more powerful aero car.

When the times were released it showed Alan had indeed taken pole and he was the first of the NI Sevens to dip below 63 seconds for a lap of Kirkistown, with a time of 1:02.925. Unfortunately for Alan, only times set during the race itself count as official lap records, but it was an indication of the sort of laptime he was capable of wringing out of his Honda powered GMS. Jack Boal was second, but was just over 0.7s back, with Graham Moore and Jimmy Dougan making up the second row of the grid. Trevor Allen, third in the table, was suffering from mechanical issues, his engine appearing to lose pressure and leaking oil into his engine bay. He was forced back to the pits, and began his own race to swap in his spare engine before the racing started.

Also having issues was Barry Dempsey, his Westfield’s gearbox had a serious problem that led to him to have to trailer the car, his day over before it really got going. As they started Race 1 it was vital for Boal to take and hold the lead if he was going to claw back Davidson’s point lead, and off the line that’s what he was able to do. As they poured through Debtors for the first time Boal was holding a slight advantage over Davidson, but Davidson held his line and crucially had the inside for braking into Colonial. It came down to the brakes, and it was Davidson who squeezed through into the lead, Boal slotting in behind him, hoping to hang on and pounce in case of a mistake.

Even by the start of lap two, while Boal managed to keep close to Davidson they had both pulled away from David Mutch in third. After a tough start to his season the Hillclimb Champion was staring to get to grips with his first season in wheel to wheel racing. Graham Moore, the mechanical brains behind many of the leading cars on the grid was holding fourth and looking to close on Mutch. Again, as the leaders entered Colonial, Boal tried to pull alongside Davidson on the brakes, but Davidson held a defensive line entering the right hander and was ale to exit, lead intact.

Behind them, Moore had a bit of a moment, putting a wheel on the grass on the outside of Debtors, sending up a plume of dust into the air at well over 100mph. This didn’t seem to slow him down as he gradually reeled in Mutch and set his sights on third. The sort of close formation racing the Sevens are famous for is full of dangers, and relies on trust and skill between the drivers concerned, and it’s to the credit of the drivers there is so much close racing and relatively so few incidents.

By lap 3 Moore had closed up behind Mutch in third and was hoping to outbrake him as they braked into Colonial. Graham started to pull to the inside, as he prepared to brake, but David had started braking a fraction of a second earlier. Moore locked his brakes in avoidence, but his front left wheel clipped Mutch’s right rear arch hard. Moore spun, his momentum carrying him perilously close to the Marshal’s post and into the long grass. With damage suspension his race and his challenge for third was over. Mutch had lost some bodywork, but mechanically his car was sound, and he was able to continue. Behind this drama Jimmy Dougan was holding fourth with Richard Munnis and Davis Buick battling it out for fifth.

A lap later and a gap was starting to appear at the front as Davidson lapped in the low 1:03’s. Boal was gamely trying to hang on, but couldn’t quite keep in Davidson’s slipstream and began to fall back. As the laps ticked by the race appeared to have settled down with Davidson holding a lead from Boal, who had a lead from Mutch who in turn had a lead over Jimmy Dougan. But Dougan had other ideas. He caught Mutch and with 4 laps to go got past him, outbraking him into Colonial. Mutch held on, keeping Dougan close and weighing up a move that could bring him the final podium place. Dougan held on, depsite the pressure, but as they exited the chicane for the last time it was Mutch who got the better drive and was able to make his move entering the hairpin. Mutch made the advantage tell. He was on the gas quicker out of the final corner and managed to get across the line to claim third from an unlucky Dougan by a length.

When the timing sheets came out it they showed the winner Davidson had indeed managed to break the lap record with a time of 1:03.042 on lap 8, beating Magennis’s 2012 record by 1 thousandth of a second. Race 2 saw a reverse grid with Davis Buick and Trevor Allen on the front row. Allen had managed to get his spare engine swapped into the car and was hoping to make up for missing the points in race 2. Graham Moore also managed to make the grid, replacing the damaged front wishbone from his off in race 1.

Away the line, Davis Buick got a very quick start and was followed through Debtors and down into Colonial by Trevor Allen. Almost unbelievably Davidson and Boal had already cut through half the field to pressure the leaders. By the time they were braking for the chicane Davidson was tight behind the leader Buick, with Boal having eased past Allen and into third. By the start of lap 2 Davidson was in the lead, and had opened a gap to Buick who was trying to hold onto second from Boal, desperate to get past him to keep Davidson in his sights. Crucially, by the time Boal did manage to get past Buick into second the leader Davidson had built a lead of a second or so. Boal fought hard to try to get back onto terms, but Davidson made no mistakes, consistently the quickest man of the field.

Not everyone was having as trouble free a race. Trevor Allen was finding out his spare engine had a couple of oil pressure problems of it’s own and had to retire, capping of a miserable day for the popular Lisburn driver.

Also having a bad day was Davis Buick who had been penalised 10 seconds for starting out of position. Inadvertently, this was the spur Davidson needed to push on even harder. As the 10 second penalty board was hung out for Buick, Davidson assumed it was for him, so he set about trying to win the race by more than 10 seconds.

Boal was comfortable in second, but could do nothing about catching the now charging leader. David Mutch similarly was comfortable in third. Behind him Jimmy Dougan had made it past Davis Buick and was now pushing Graham Moore for fourth.

Dougan got close, but ultimately Moore, an ex-stock car racer, drove a clever defensive race and was able to claim fourth as a reward for his hard work getting his car back on track after Race 1.

David Mutch picked up another podium place, third behind Jack Boal who again came second. No one, however, could touch Davidson, who again broke the lap record, this time recording a 1:02.0922 to eclipse even his qualifying time and claim both the win, and the official lap record for the NI Sevens at Kirkistown.

With just a sprint and two races to go in the series, it looks like it’s down to a two horse race for the title, but can anyone catch the leader Davidson? 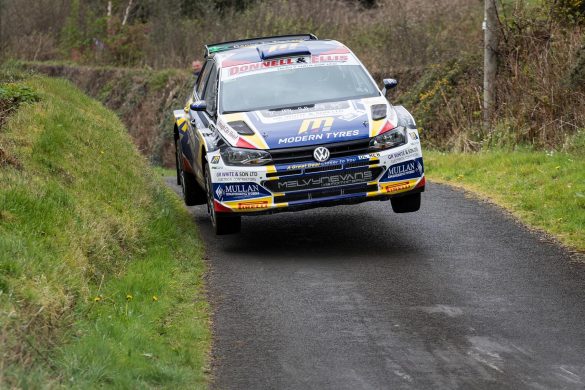 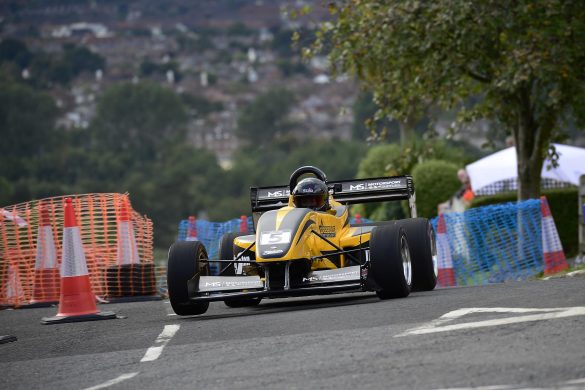 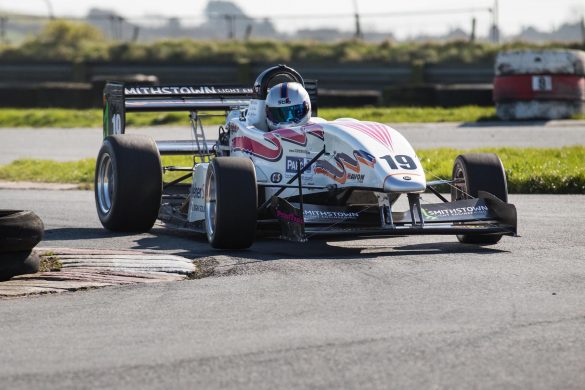