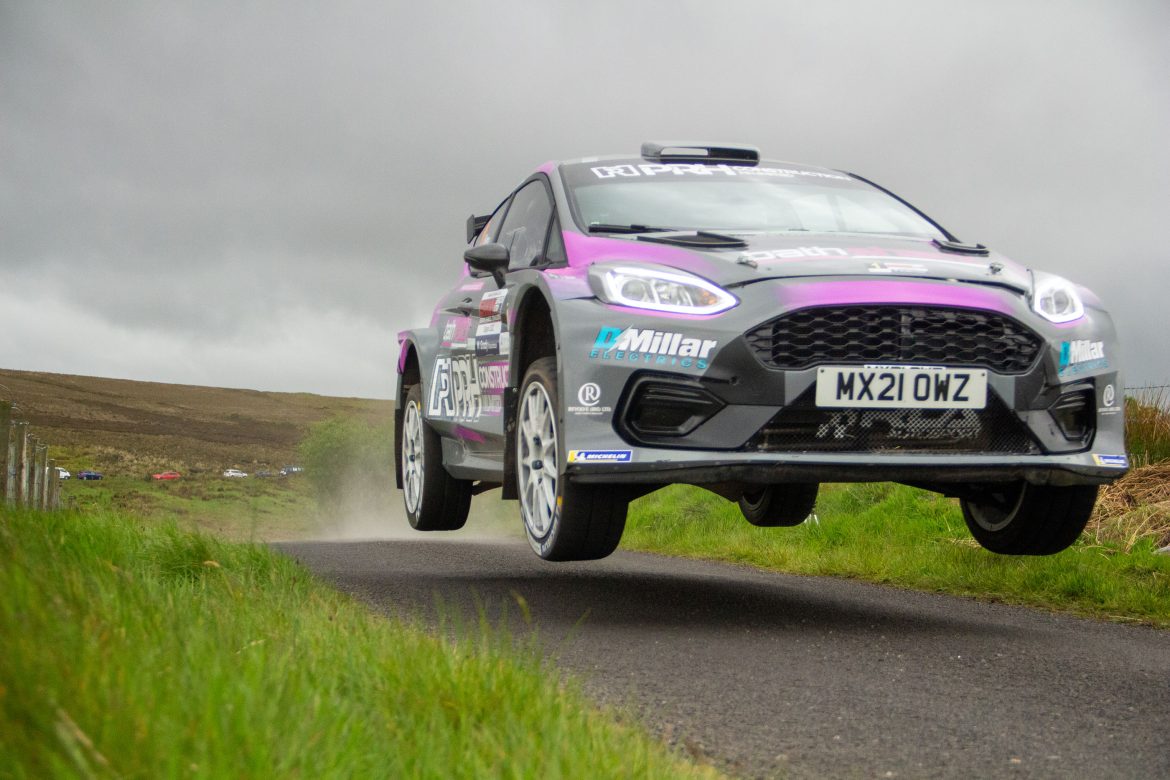 Desi Henry and Paddy Robinson sealed a last-gasp victory at the Claudy-based Eakin Bros Brian James Trailers Stages Rally but it is Derek McGarrity who has burst into the lead of the McGrady Insurance NI Rally Championship after round three of the hotly contested series!

McGarrity finished seventh overall at the event while a number of his main championship rivals, including pre-event series leader Jonny Greer, fell by the wayside. However, it was Kilrea’s Desi Henry who led the Maiden City Motor Club organised rally at the start. He stayed in front until a hard-charging Cathan McCourt took control with a stunning drive through the fourth stage. Henry clawed back some time over the fifth test but it looked as though McCourt was going to hang on to the top spot until a final stage overshoot dropped him back to second, handing Henry the victory.

“I had a clean final stage but I think we could have gone faster,” Henry said at the finish. “I’m delighted with the result. Cathan was driving brilliantly. Rallying is a level playing field (with the R5 category) and long may it continue.”

It was Henry who was the fastest out of the blocks on the opening stage in his Fiesta. Despite coping with some brake fade, he was an impressive nine seconds faster than reigning NI Champion, Jonny Greer, while third-placed McCourt stalled on the start line.

Henry’s braking troubles worsened on stage two which caused him to clip a chicane and overshoot a junction. Meanwhile, second-placed Greer struggled with an issue at the rear of his car but he still managed to reduce the gap to the leaders to three seconds with McCourt a couple of seconds further drift.

Crews returned to action after service but Jonny Greer’s challenge ended after he clipped a bridge near the start of the third stage and broke a rear hub. Instead, it was McCourt who set the pace. Despite having no intercom at the start of the stage, he narrowed the gap to Henry to six seconds.

One stage later and McCourt turned the rally on its head with a stunning time that saw him move into a 3.1s lead! Henry dropped to second and admitted he was lucky not to lose more time after clipping a rock.

“We cut a corner and hit a rock with the front left wheel,” Henry recalled. “I was very, very reluctant over the next couple of miles. I don’t know how we got away without a puncture.”

Crews returned to service to prepare their cars for the final blast over the closing two stages. The pressure was mounting at the head of the field with both McCourt and Henry still capable of securing the rally spoils.

Both crews entered the final two stages on a mission. Henry claimed the fastest time on the fifth test, narrowing the gap to the leaders to less than two seconds. McCourt was feeling the pressure and a final stage overshoot handed the rally lead back to Henry, enabling the Kilrea man to secure the win at the last moment!

“We overshot a junction and had to turn around,” McCourt rued, “but I’m happy enough. I didn’t think I’d be on the pace, to be honest. I was just coming here to learn the car. We only had a small amount of testing in it. I’d say we lost easily 10 seconds with the overshoot but there’ll be another day.”

Garry Jennings and Rory Kennedy completed the podium positions in their Fiesta R5. They also suffered with some braking issues but they were right on the pace by the end of the day.

“I just made the decision on Thursday to enter the event,” Jennings said. “I knew it was going to take time to get back on the pace but I enjoyed it and I’m getting the hang of it again.”

There was a three-way battle for fourth overall that eventually went in favour of Joe McGonigle and Ciaran Geaney. At one point, little more than one second separated him and Alan Carmichael’s Hyundai together with Damien Tourish’s Escort MkII.

A damp stage five favoured the four-wheel-drive cars of McGonigle and Carmichael, with Tourish dropping out of the battle in his Escort. McGonigle managed to stamp his authority on the penultimate test and although Carmichael fought hard on the final stage, it was McGonigle who secured the fourth spot.

“I’m really happy with the car now,” McGonigle said. “We made some setup changes before the event and we’re only going to get quicker. With Jonny (Greer) retiring, that has really closed up the championship battle now between four of us.”

Fifth-placed Alan Carmichael and Arthur Kierans were using the event as a test ahead of next week’s Jim Clark Rally. They lost a few seconds driving around the stricken Fiesta belonging to Jason Mitchell and Paddy McCrudden, who landed in a ditch on stage three, and then McGonigle got the better of them on the tricky fifth test.

“It was very tight at the end,” Carmichael said. “We lost a few seconds in the mixed conditions on stage five. I tried hard on the final stage but we couldn’t take enough time out of him (McGonigle).”

An excellent drive by Damien Tourish and Domhnall McAlaney handed them sixth overall in their potent Escort MkII. They were as high as fourth overall at one stage, only for a sprinkling of rain to dampen their progress. They dominated the two-wheel-drive category and claimed an emphatic win in the class from 11th placed Camillus Bradley and Crawford Henderson, with Jonny Cargo and David McElroy in 12th overall and third in class.

Derek McGarrity and Graham Henderson enjoyed a trouble-free drive to seal seventh overall in their Polo GTi. With the retirement of Jonny Greer, the result has promoted them to the top of the NI Championship tables and bolsters their chances of a record ninth crown.

Aaron McLaughlin is another driver that is in the race for the championship title. Navigated by Darren Curran, they switched to a Fiesta R5 for the event and took a bit of time to settle into their new mount. A solid result of eighth overall has handed them an armful of championship points, making an exciting prospect ahead of the final two rounds.

Paul Britton and Peter Ward were in the wars with their Subaru but they survived to tell the tale and finish ninth, as well as first in class 8, ahead of the Evo belonging to Niall Devine and Liam McIntyre.

An expected challenge from Declan Boyle failed to materialise as he hit mechanical troubles from the start of the event and retired after stage one. Donagh Kelly was sixth overall when he was forced out on stage three and Sean Devine was forced to park up once he reached the second service.

Andrew Bushe retired his Chevette with suspected engine issues and Adam Semple exited the rally with gearbox trouble. Joe Hegarty lost a couple of minutes when he had to stop and change a wheel, while Ryan Loughran’s hopes of challenging for two-wheel-drive spoils were thwarted when he cut a corner too tight and got a puncture.