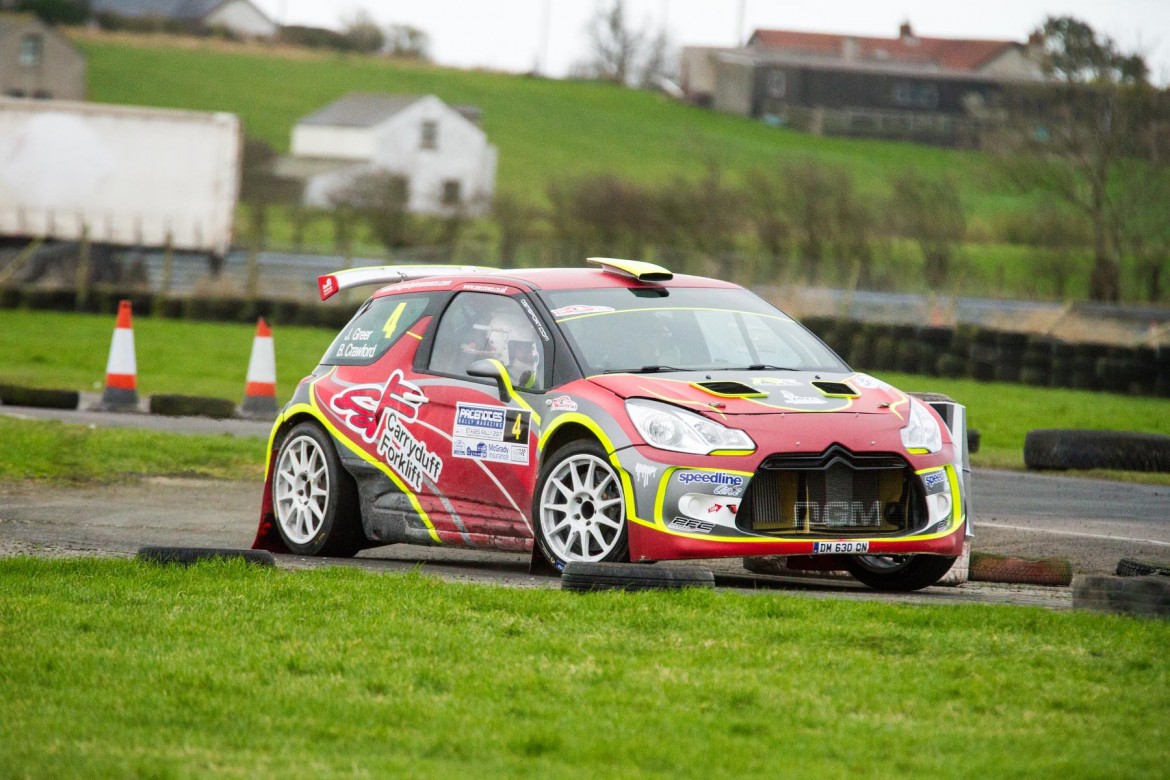 Greer In Gear on Round One of the 2017 MSA ANICC McGrady Insurance Northern Ireland Rally Championship!

Jonny Greer and Brian Crawford in their Citroen DS3 R5 took a superb victory on the Pacenotes Stages Rally, held at Kirkistown race-circuit round one of the MSA ANICC McGrady Insurance Northern Ireland Rally Championship on Saturday.

The Carryduff driver in his DGM Sport machine was fastest on the opening two tests, but the Citroen trundled into service worryingly on two cylinders after stage two. The fault was traced to a simple wire, and with the DS3 back to full health, fastest times on the final three tests sealed a thirteen second victory.

“We had a great day, really enjoyed the rally and delighted to get the win” said Jonny at the event prize-giving. “Thanks to everyone who made it possible. Brian Crawford for keeping me right all day, the team for a great car again also to the North Armagh Motor Club and all the marshals and volunteers for a brilliant event!” Seven times NI Rally Champion- Derek McGarrity in an R5 Ford Fiesta took second place, but was lucky to even make the start! “A seal went yesterday (Friday) at lunch-time in the turbo and the car was pluming out expensive smoke! The team worked frantically until 1am this morning to get us here. In that respect too I’m more than happy with second.

The R5 car is a nice car, and I like it but I do have a WRC version coming in soon.” In third for the second year in a row was Peader Hurson in his new Ford Fiesta WRC. The former Irish National Champion’s only drama was a spin on the second stage which dropped him to lower reaches of the top ten, before clawing back to third.

A fine fourth in his S10 Impreza was Robin Phillips with his daughter Laura in the co-driver’s seat. The Saintfield driver was a NI Champion back in 2000. Another former champion- Conor McCloskey was holding third place after four stages in his Fiesta WRC only for engine failure to halt the Kilrea driver on stage five. Fifth was rally car trader Kieron Graffin in another DS3 R5, with Alan Carmichael in the Mini WRC sixth after a steady start. Alan is planning a full attack on the championship, and at Kirkistown finished ahead of three times NI Champion Kenny McKinstry in his S8 Impreza WRC. In eighth and winning Group N were names Allen and Connolly.

Back in 2007 the late Glenn Allen won the series with Damien Connolly alongside in his WRC Corolla. Now his son Philip made a sensational rally debut with Damien’s brother-Martin along-side, and the new Allen team complete with the support of Philip’s grandmother Vera had much to celebrate!

Two wheel drive winner in a fine ninth overall was Keith White with Paul Mulholland in the 2.5 Millington MK1 Escort, another great performance by the Crumlin driver. Tenth and just four seconds behind was an amazing achievement for Dessie McCartney. Taming his 2.5 Millington engined Darrian, the 1975 Galway and 1980 Ulster Rally winner, now into his 70’s has carried on the McCartney rallying dynasty, so famous in the 70’s and 80’s when Dessie and his late brother Ronnie competed at the top level in the UK and Ireland.

Third two wheel drive car home was the 1600cc Peugeot 208 R2 driven by Kyle White in thirteenth overall, whilst the top three in Group N was completed by Evo’s of Clive Kilpatrick and Geoff McMahon.

Round two of the McGrady Insurance series is at Bishopscourt for the Ballynahinch Motor Club’s event on 11th March. To keep up to date please check out the NIRC Facebook page-http://www.facebook.com/nirallying and check out www.anicc.org.uk for the series regulations and latest points. Rally results available onwww.rallyscore.net