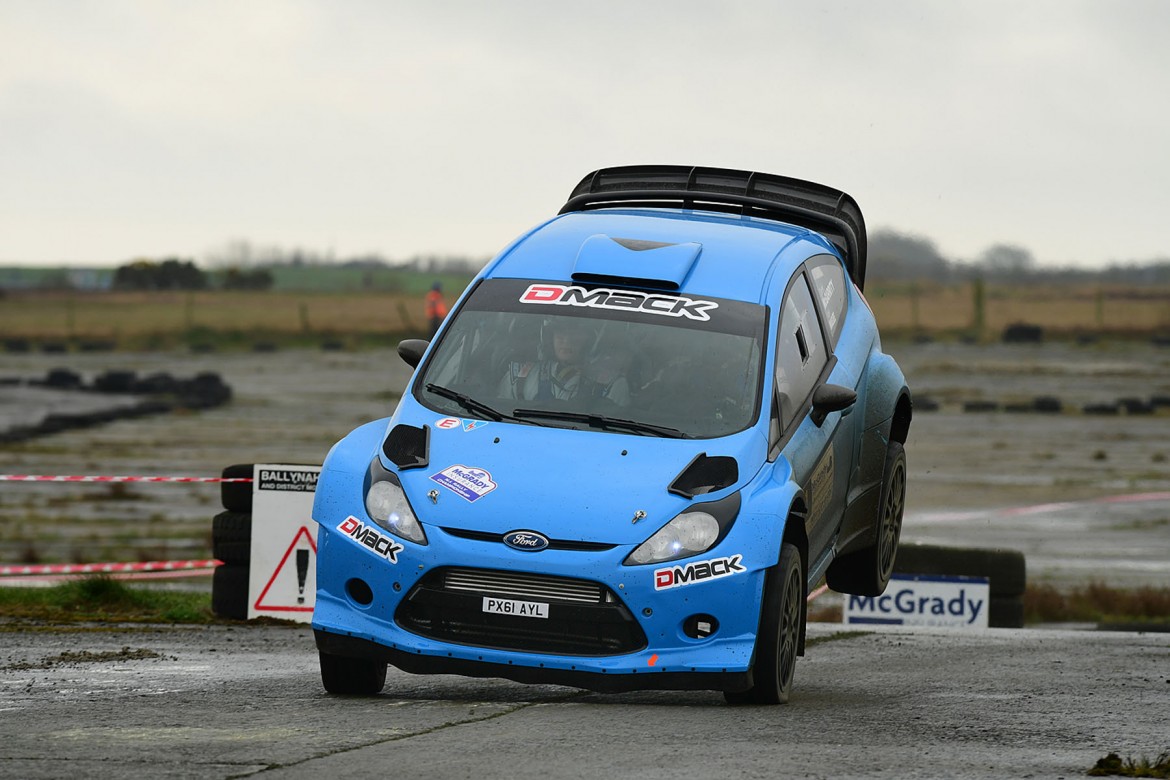 Derek McGeehan’s second place with the Mini WRC looked much less certain as had a titanic tussle with Stuart Biggerstaff in the S9 Impreza WRC. It was McGeehan who took charge over the opening two tests, but the new lay-out on stage three, and Stuart re-acclimatising to his Subaru, the Kinallen driver took over second place briefly with a superb fastest time. However Derek replied on stage four taking back the place and the 1600 Mini held off the older 2 litre Subaru by just 3.8 seconds.

Kenny McKinstry had his nephew Jack on his first rally in the co-driver’s seat. This time the Banbridge engineer had a more modern right hand drive S14 Impreza WRC and he made a solid start in fifth before snatching fourth from Peader Hurson on stage four, a position Kenny was to maintain. Fifth at the finish was Alan Carmichael in the Mini WRC. He was an excellent third on stage one, but stage two provided the dramas, dropping him to ninth before charging back to fifth, just six seconds ahead of Peader Hurson in sixth. Taking seventh on the final stage was Saintfield’s Mark Massey in a new Group A Subaru, just 2.8 seconds in front of Dromore’s Kyle Orr who was also debuting a new machine the unique Fiesta 4X4 Proto. Ninth and first in Group N was Phillip Morrow, the Lancer dropping down from eighth as conditions dried up and favoured the more powerful cars. Group N winner on round one- Philip Allen had his Evo 10 in his dad’s old colours, but he was forced out after stage four, but not before setting a fastest Group N time on the third test. Finishing second and third in Group N where the Evo’s of Geoff McMahon and Clive Kilpatrick separated by just four seconds.

Two wheel drive winner in a fine tenth overall was James Kennedy with wife Heather alongside in their 2.0 MK2 Escort. The Antrim pair climbed from fifteenth to tenth during the day with Kyle White taking second in the two wheel drive’s in his Peugeot 208 R2, with the really novel Toyota MR2 of Robert Erwin a close third. One of the hard luck stories of the rally belonged to James Leckey Jnr who rolled his modified Peugeot 106 out of the event on the final corner whilst challenging Kyle White for second and the 1600 class. Another hard luck story was Colin Price’s retirement from the class three lead on the final stage with a broken drive-shaft on the Vauxhall Corsa.

Niall Henry with his Evo 10 made up for his first round retirement with an eleventh place overall finish, whilst championship sponsor Fintan McGrady was delighted with fourteenth and a class seven victory. To keep up to date please check out the NIRC Facebook page – http://www.facebook.com/nirallying and check out www.anicc.org.uk for the series regulations and latest points.

Title image thanks to Mark Breen