When speaking to Nicholas about his truly special S1 Lotus Elise, one of the first questions I asked was “Why a Lotus?” I didn’t ask this question to try and strike up a conversation and discuss alternatives to the well known sports car, or imply that I was questioning his choice in cars, I just genuinely wanted to know why he chose it, because I got the feeling that when it came to track focused sports cars, not only does he know what he wants, but more importantly (and perhaps more unusually) he also knows what he is talking about. If you spend a few minutes looking around this car you too will get the sense that everything that has been done to it has been done for a very specific reason, for a purpose, with intent. Hopefully by looking at these photos and reading Nicholas’s and my thought’s you will get some sense of this. Many people ‘love’ their cars, and for lots of different reasons; looks, performance, resale values. But from spending some time with Nicholas and reading the brief he gave me, I don’t think I have ever met someone who appreciates their car for what it is as much as Nicholas does. He loves it for its form, its intent and of course for the way it makes him feel. When I was asking Nicholas to tell me a little bit about his car, I expected a brief spec list and maybe a funny story; this is what he opened with; “…a purity of execution, wrapped in an emotional and spontaneous style…” “This is how Julian Thomson summed up his design of the original S1 Lotus Elise, the car you have here. This quote is on a canvas of one of his original design drawings, taking pride of place in my living room. Some might call it a bit obsessive (and they would be absolutely and completely right in doing so ), but this car does that to you. It gets under your skin.” I think it is a very pretty car, a nice mix of smooth curves, and track attack style diffusers. Most would say it is a ‘cool’ car, Nicholas is slightly more poetic in describing the aesthetics of his Princess; “This car is all about emotion. The design is clean and appealing – none of the hard edges or aggressive stances you get in most cars these days, including newer Lotii.” Nicholas continued “Drive past a school, and you will have kids running along the fences. Park in the supermarket or pull up at a petrol station, and people will acknowledge it with a smile, or come up and ask for a picture. Not just petrol heads or die hard fans either – mums in people carriers, pensioners, kids of all ages. People will let you out of side roads, or move over to let you by, waving and smiling as they do so. Everyone likes this shape. It makes people smile.” I asked Nicolas to talk a little bit about how he got the Lotus to handle so well, this is what he said; “Simplify, then add lightness” “The famous mantra of Colin Chapman. The S1 Elise has simple but extremely effective double wishbone suspension, superb brakes, rack and pinion steering. All bolted onto an aluminium frame, with a glass fibre body shell on top. The whole thing weighs only around 700kg, and you can tell.” “It is very adjustable as well. Nuts, bolts, cables. Nothing fancy; easily adjusted any which way you like. A tiny suspension tweak can make a big difference. Yet, at the same time, it is very civilised. Because it is so light, there is no need for rock hard suspension to control it. Instead the suspension can be left to do its job. Down your average B-road, it just floats over bumps and lumps. Even on track there is compliance enough to ride curbs without any bother. No bouncing for the nearest hedge row, no skipping across the track.” Like I said earlier, he is a man who knows what he is talking about. Power wise the little Lotus puts out a very healthy 196bhp, this is due to an improved cooling system, a complete EP engine back exhaust system, an Emerald engine management system and ‘some internal work.’

Not bad for a little Rover unit. 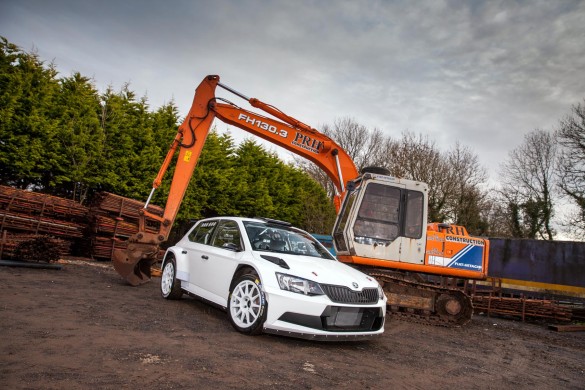