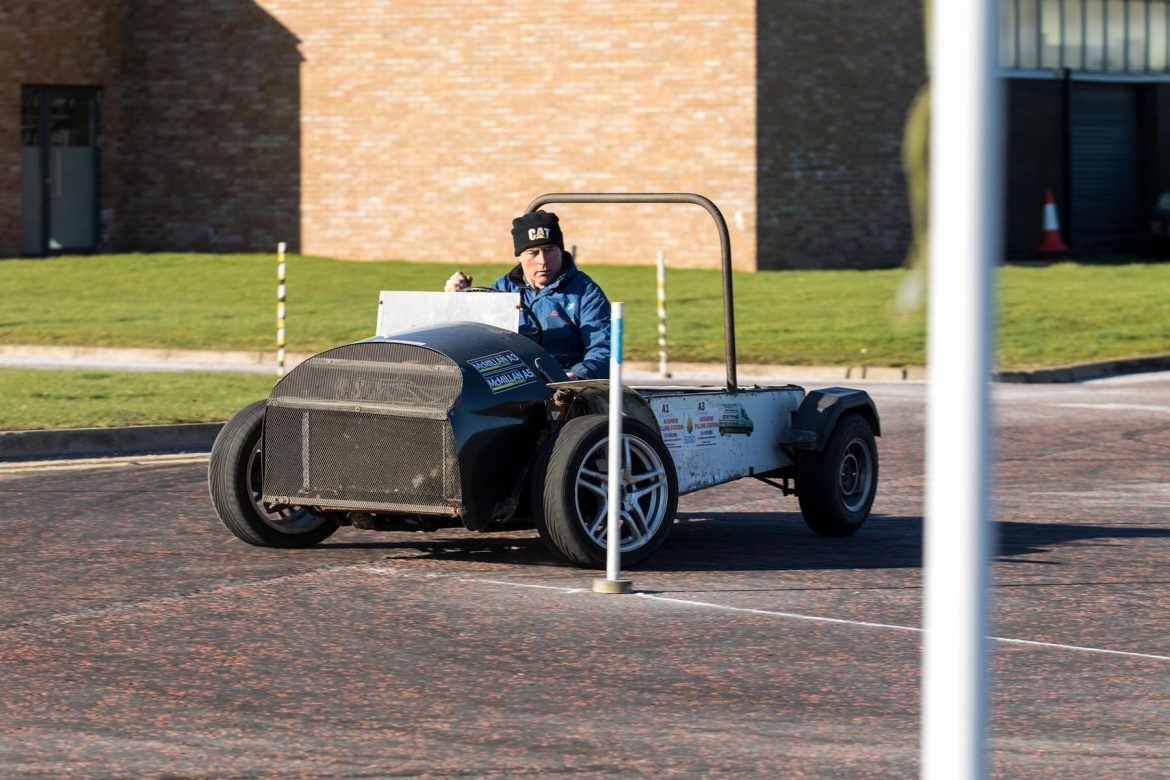 Stewartstown’s Steven Ferguson got his 2022 autotest season off to a flying start, as he took the win at the first round of the McMillan Specialist Cars NI Autotest Championship.

The Autotest Drivers Club hosted this event at the Transport Training Services, Nutts Corner on Saturday 5th March, in what could only be described as near perfect conditions, as the sun shone all day for competitors and marshals. With 47 cars lining up to start, it was poised to be a day of stiff competition and proved to be so.

It was Ferguson who would set the fastest time on Test 1 in his Mini Special, with David Thompson in his Vauxhall Nova only 1.7 seconds behind in second.

Guy Foster gave chase to Ferguson in Class A in his mini special but was unable to catch him, finishing 14.3 seconds behind the reigning NI champion, but with Ferguson claiming the Overall Win this elevated Foster to first in Class. Chris Grimes and James Wilson battled it out for the runner-up spot in class, with Grimes finishing second, 2 seconds ahead of Wilson. Newcomers Adam and Jack Lowry would be early retirements in their recently purchased mini special but showed great potential having only completed on a handful of similar events recently.

Paul Blair made a welcome return to autotesting, taking the win in Class B for Sports Cars in his newly-prepared  Westfield with son Andrew just behind him in second and Trevor Ferguson in his Silvia Stryker taking third in this class. With only 4.8 seconds splitting these three drivers, any slight mistake could have been enough to change to results dramatically.

Jonni McDaid would take the Class C win in his Mini Saloon, despite a power steering failure before he had even turned a wheel on the tests. Having to fight with the steering all day didn’t dampen the spirits of the Fermanagh man and he pushed through to finish the day ahead of autotest veteran Norman Ferguson. There was an early exit from the Mini class for brother’s Andrew and Richard Earney, who also suffered a steering problem, which forced them out of the event.

In the Large Saloon Class, David Thompson returned to battle with Mark King in their Vauxhall Nova’s, seeing both drivers trading fastest times throughout the day. At the finish it would be Thompson who had the upper hand, claiming the class win, with King settling for second. It was a three-way scrap for the final podium place in Class D, with Damien Mooney, Gary Campbell and Ben Colhoun showing vast improvements in driving technique and determination, from when they first entered the championship. It would be the more experienced Damien Mooney would take the final class award.

In the Championship Semi-Expert Class, it would a Large Saloon Vauxhall Nova 1-2, with Dungannon’s Gary Campbell finishing a minor 2.5 seconds ahead of Ben Colhoun.

In the Clubman Challenge, Class A was won by Adam McMullan in his Toyota Starlet Special, and he also sealed the Overall Clubman win on this occasion. The Class C winner was Ben McKee in his Nissan Micra, with Kevin McNamee taking second and Taylor Gribbon in third. Class D was a battle of the Mazda MX-5’s, with Lawrence Baird taking the win ahead of Derek Harrison and Ian Lowry in third.

In the Advanced Challenge Jack Gillis in his Vauxhall Nova would take the Class A win, as well as the overall win. Second in class would go to Paul Phelan in his Mini Special. Michael Workman was the solo entrant in Class B but put on a fine display of driving to finish fourth overall in the Advanced Challenge. Class C winner was Robert Dickson in his immaculately prepared Mini Saloon with the newly built Toyota Yaris of Robert Robinson finishing second. Gareth Dillon would be the only entrant in Class D in his Mazda MX-5 and continued to show his autotesting prose finishing third overall in the Advanced Challenge

A great day was had by all, and with beautiful weather conditions and a fantastic display of driving skills from all competitors made it enjoyable to watch by the many spectators who turned out to see all the thrills and spills the event had to offer.

The boys now head to the next round of the championship being hosted by the Ulster Automobile Club on Saturday 26th March, where they will battle it out once more to see who will be fastest on the day. If you can’t wait to then for more action from the Autotest NI, visit their Facebook and Instagram for video highlights from this event.