The 911 is one of my favourite cars of all time and the 964 derivative is the preferred choice as after that the front lights blended more into the body losing a little of the original 911 character.

A few years back John Peden told me he had a Porsche that he had “big plans” for and even though I knew John was really into his Air and Hydraulic suspension he surely could not put hydraulics into a Porsche 964. A Boxster or even a 944 I could see but a 964? Nah! Many, many times I along with plenty of others have doubted the sanity of John Peden. This time did he over step the mark and push the envelope too far?

On our local car forum www.reallymeansounds.com a build thread started by John is always entertaining to read. There are usually several elements; disgust, joy, confusion, awe and dare I say it, even jealousy. The Porsche not only stirred debate on RMS but it also seemed to cause a tremendous fuss on Pistonheads as well. On a personal note I really have to say I love this Porsche as it just oozes class. It does not scream at you with an over the top paint job as it does not need to, you just cannot help but look at it.

John had searched for a Polar Silver 964 for quite some time and it quickly became apparent that getting one was not going to be that easy. At this point most of us would just settle for the next best thing and live with it but John decided that he would buy the best 964 he could find within his budget and when he got it home to Northern Ireland he would set about creating his vision with the car. The Polaris Silver is an original Porshce colour and is just so classy. Normally I do not like silver cars but it is just right for this 964. The car is equipped with an American RS specification rear bumper, beautiful tear drop mirrors and front brake ducts to allow some air to cool the brakes when he takes the car for a blast and I can assure he does.

This is not your normal show car as this was a daily driver for John for close to 2 years! The car has also been treated to clear front lenses and side repeaters to freshen up the look of the car too. On the rear of the 964 John has added a 105mm tail pipe and Carrera RS script badges. Obviously the main modification is the Rayvern Hydraulic suspension and it is of course the main bone of contention for the purists out there. John carries out all the suspension modifications himself and has been doing it for years at this stage.

What he does not know about this type of work is simply not worth knowing. This system is a fluid dispersion hydraulic set up and John has had to notch the chassis to allow for drive shaft clearance. The front of car has 625lbs springs and the rear springs are rated to 900lbs.

John has also fitted Accuair e-level self-levelling suspension with a custom wiring harness but as he explains it was not simple: “While plenty of systems are available for air, there is nothing really out there for hydraulics, certainly nothing that will run a one pump setup like this. So after speaking to Accuair, I purchased one of their ‘e-level’ air setups and set about making my own wiring harness with the use of various components to mate it with the hydraulics.” The car has been poly bushed front and rear and the anti-roll bar (24mm up front and 26mm in the rear) is from H&R. To get the car to sit this low John had to roll the wheel arches to get everything sitting just as he had envisioned.

Again, it was not as easy as it sounds: “I had no bother at the back, but clearly I needed to get the front down to match, and it just wasn’t happening. After a bit of head scratching, I machined a section off the lower front arms as they were touching the front tub, which was also slightly modified for clearance. Another problem was that it being 4wd the drive shafts were an issue, so I notched the front chassis legs and then rerouted the brake lines.”

John is a very laid back kind of individual and that is reflected in the way he conceptualizes his cars. The Porsche is a performance car from the start so other than a de-cat the car is completely devoid of any engine performance upgrades and to be quite honest after witnessing it during the shoot it really does not need anything to make it quicker and oh boy did that air-cooled six sound beautiful! When John had bought the car it had a very nasty blue interior and that was certainly not part of the plan. Without delay the interior was stripped out and sent off to Barry at S.L. Auto Upholstery to be finished in black. The gorgeous seats are Carbon backed GT3 Leather and are amazingly comfortable as I always make a point of sitting in cars I love just to get a feeling for them, imagining myself owning one – sad I know but we have to be able to dream… right? The effort John went to, to have this interior perfect is quite crazy…

Everything from having custom made carpets designed to re-trimming the dash in black leather, the head cloth was also replaced with Alcantara, Carrera RS embroidered rear panel, Carrera RS inspired door builds the list goes on! After Barry at S.L. Auto Upholstery had worked his magic all the bits were then brought to the guys at Audio Advice. They built and trimmed the sound system for it, even making Perspex lit cover for the hydraulics. John was over the moon “It’s even better than I imagined!”

The car is equipped with some nice MTX gear provided by Audio Advice. MTX 6″ Components, a MTX 5 Channel amp and 2x MTX 5500 12″ Subs blast out the tunes which John controls through an Alpine head unit. The custom build that Audio Advice completed looks absolutely superb. I can see why John used these guys for the installation. Initially the car was running some 18″ rims but John wanted something different, something more in fitting with a Porsche from the early 1990′s up popped a set of gorgeous OZ Futura wheels and John had them on the car in no time. However although the wheels were what he was after the fitment was not right. John hunted down some new dishes and swapped the rear dishes to the front. John then used the front barrels on the rear and had IMAGE wheels make new front barrels to end up with 17×8.5 on the front and 17×9.5 on the rear. As with the Alfa Romeo the wheels on this car provide sharp edged lines for the soft and sleek looking Porsche.

Want to buy the Porsche?? Well that does not seem too likely at this stage as even after two years (which lets face is a long time as most people look to sell their own creations after 2 weeks!) John loves it every bit as much as when he rolled it out for the first time. Besides he cannot think of what he could buy that could even replace it!

So there you have it, the car has been about the scene for a few years now but we at UsedCars NI are so happy to have John get in contact with us in order to get a feature done on it. 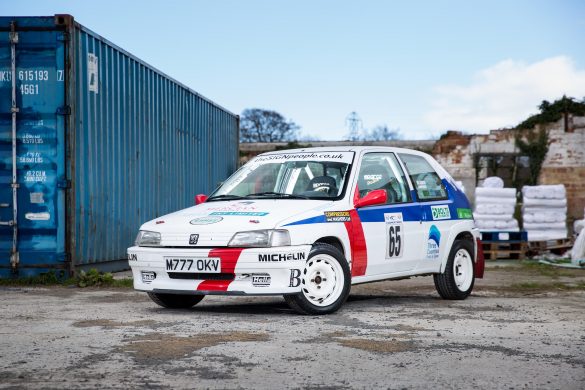