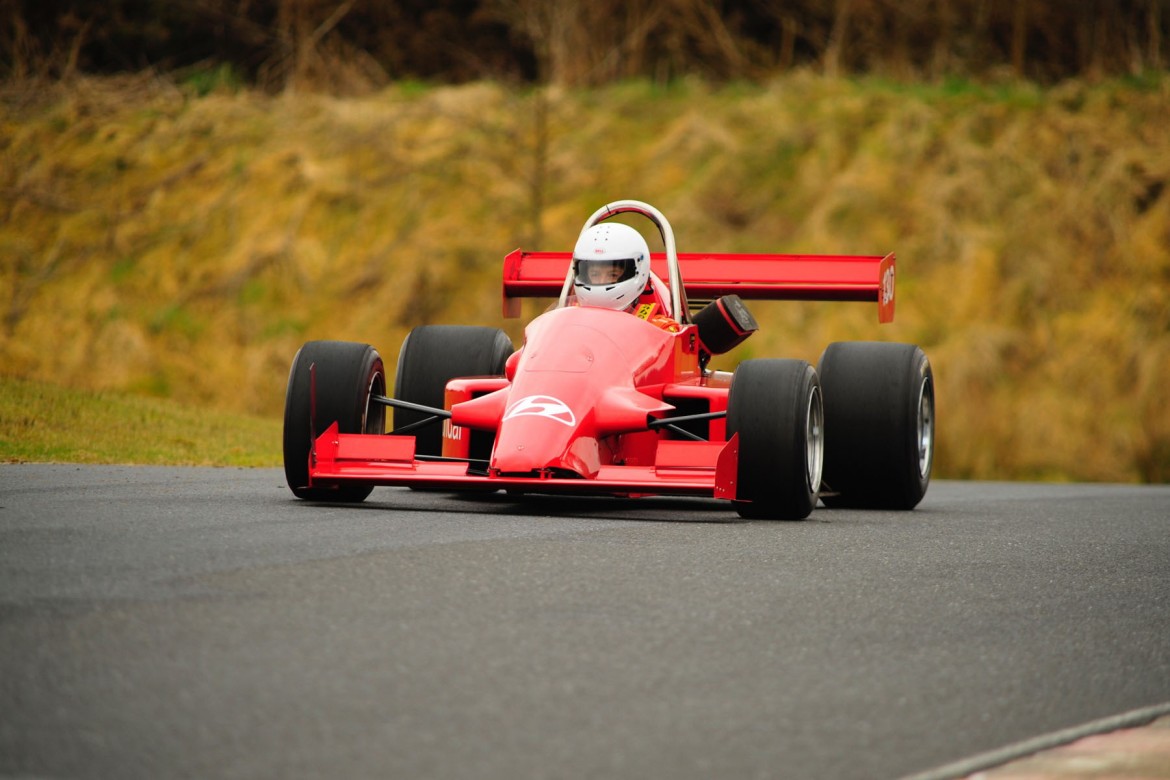 Saturday 7 April saw the third round of the SW Adair Tyres Northern Ireland Sprint Championship visit Nutts Corner for the first time this year. Good weather greeted the 53 starting competitors, marshals, officials and spectators with seasonal temperatures and a dry day forecast…
The dry weather played into the hands of all competitors as the more technically demanding Nutts Corner Long Circuit track was dry and grippy from the off. This lead to some very quick times from practice which continued to fall as the track temperatures rose and the drivers felt more comfortable to push harder with every run.
Greencastle man John Morgan lead from the start in the family 2.9 Pilbeam MP82 which he shares with his father Robert Morgan. John hit the ground running and was fastest in first practice and then again on every run over the course of the day. He took fastest time of the day and secured the class 15 win with a fabulous run of 122.08 seconds.
Morgan was a mere 0.22 seconds faster than second placed Omagh driver Adrian Pollock who gave it his all on his second timed run to set a blistering time of 122.30 seconds, only 0.22 seconds slower than the event winner.
Third place went to Ballymoney man Steven Gault in his Reynard 903 with a time of 124.77 seconds. Adrian Pollock’s second place is enough to keep him in the lead of the Northern Ireland Sprint Championship with John Morgan’s win taking him to second place, one point behind Pollock.
The class battles failed to disappoint with close battles being the order of the day throughout the field. Class two (Road going series production cars) was won by Saintfield’s Michael Clarke in his super quick Lotus Elise with a run of 158.07 seconds and a speed trap speed of 82mph.
This was only 0.42 seconds faster than Killyleagh man Tom Lawther in his unusual Rover SD1, whose time of 158.49 seconds saw him go through the speed traps at 81mph. Third in class went to Stephen Donnelly’s Renault Clio with a time of 158.76 seconds and a speed trap reading of 75 mph in his more nimble two-litre Clio. The Modified Series Production classes saw Ballymoney’s Adam Brogan take his maiden class win in class 6a for 8-valve Modified Production Cars from David Evans. Adam has always been close to the top of the class and has been threatening a win for the last two seasons but his smooth driving style and his ability to carry huge cornering speed in his little Peugeot 106 finally paid off.
The 16-valve Modified production class was won comfortably by Omagh’s Dermot O’Hagan in his Honda Civic from Portaferry’s Brian Fitzmaurice. This result puts Brian and Dermot joint top of the class 6B championship on equal points.
Paul Montgomery was the fastest in the road going category in his 4wd Subaru Imprezza, Stephen Strain, from Downpatrick, was again the winner of the Historic Category in his beautiful Mk1 Escort.

Dungannon’s Seamus Morris took the honours in the sports libre Rally car category in his Darrian GTR.
The surprise of the day was the debut of Clive Latimer’s new Sylva Riot which he debuted in a dual drive with hillclimb expert David Gibson. This nifty little lightweight two-seater car is powered by a motorbike engine and its lightweight chassis and superb handling characteristics meant that Clive was able to take a comfortable class 7 Modified Specialist Production Car class win, as well as the honour of being fastest in the modified category.
The Lurgan man’s speed through the speed trap was an astounding 89 mph and this helped him to a position of 12th overall. This was no mean feat considering it was the first time Latimer had competed in a rear-wheel-drive car. He finished 4.27 seconds ahead of David Gibson who was second in class while Graham Boyce was third.
The fourth round of the SW Adair Northern Ireland Sprint championship will take place on 2 June at Nutts Corner where the ‘short’ circuit will be in use. Further information can be found at www.anicc.org.uk and www.facebook.com/nisprintchampionship.
Images: Gary Craig Motorsport Photography