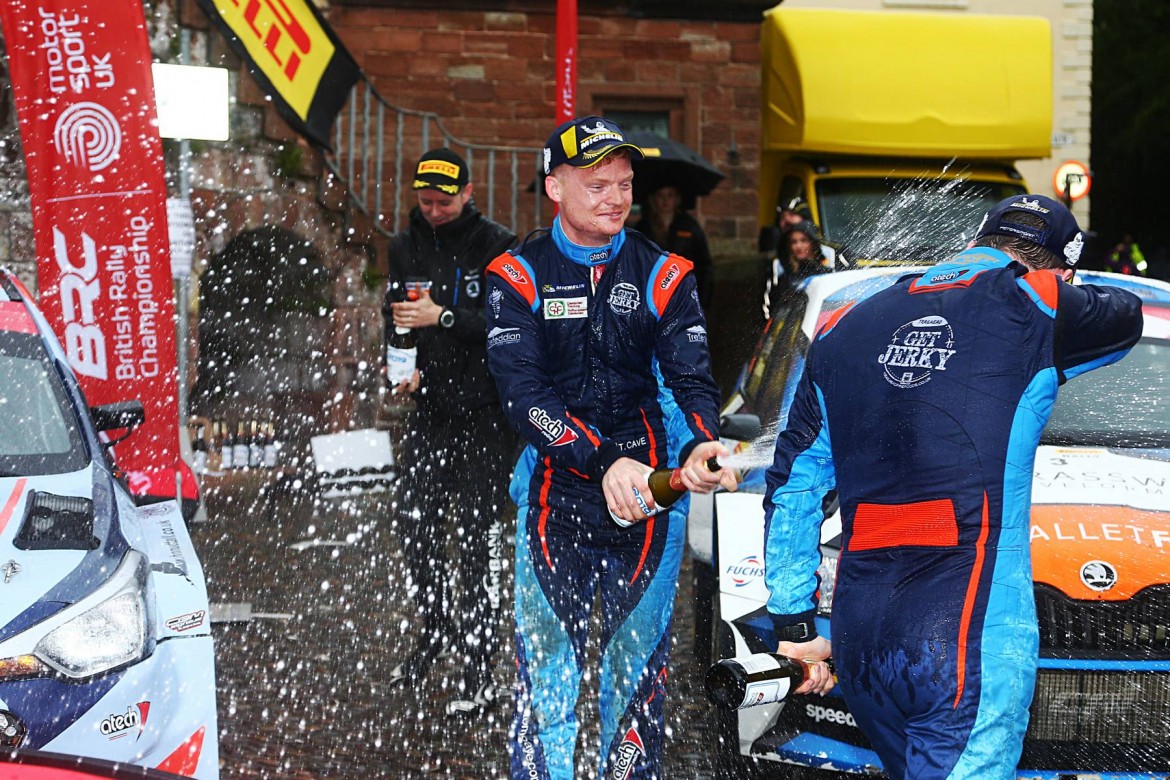 Tom Cave produced a faultless drive to win the third round of the British Rally Championship – the Pirelli International Rally last weekend (27 April).

Along with co-driver Dale Bowen, the Welsh pairing marched to a 17.6 second victory in their Michelin-shod Hyundai i20 R5 on the third round of the series and for Cave he made it two wins on the bounce in Britain’s premier rallying series.

WRC2 star Rhys Yates made an impressive return to the series to clinch second in his Skoda Fabia R5, while 2011 BRC champion David Bogie in another Fabia R5 produced a spirited drive to seal the final spot on an all-star podium.

The Pirelli International Rally got underway at the impressive Pirelli factory just outside Carlisle where the British Rally Championship runners were flagged away at a vibrant family fun day. 60 miles of fast and furious action through the iconic Kielder forest followed, with the champagne being sprayed in nearby Brampton town centre for those who conquered the demanding gravel stages. Joining the BRC regulars was Hyundai factory driver Jari Huttunen, who provided high-speed competition in his Hyundai i20 R5.

Huttunen was quickest out of the blocks on the opening stage, but it was Hyundai team mate Tom Cave who would go quickest on the second test. Cave debuted the i20 R5 on the Cumbrian event in 2017, but had to retire with mechanical failure.

There were no such problems this time round as the West Cork winner continued to flex his muscles as he galloped away to a 17.6 second victory to claim maximum points for a second consecutive event to lead the overall drivers’ standings. Cave was pleased with the victory – and was also delighted to give his co-driver his first BRC win.

“It’s a nice feeling to get two on the bounce,” said Cave. “We had a good morning loop and that set the tone for the rest of the day and I managed the gap this afternoon. Thank you to everybody who got the car here, the tyres worked really well, and I am really pleased to give Dale [Bowen] his first rally win. Heading to Ypres, we are really in the championship fight and I really want to take this momentum into the next round and push on for another win.” Rhys Yates made a welcome return to the British Championship on the Cumbrian round. The Englishman has been excelling in the World Rally Championship this year and used the Pirelli round to gain vital miles before his next WRC2 outing in Portugal. Aboard his Skoda Fabia R5 and with James Morgan calling the notes, Yates made an instant impact, setting fastest time on the third stage as he charged to second place overall – repeating his best BRC result which he achieved exactly 12 months ago.

Huttunen finished third overall but wasn’t registered for BRC points which meant 2011 champion David Bogie rounded out the BRC rostrum in his Skoda Fabia R5. After an early bath last year, the Scotsman fought tooth and nail, as he battled at the front of the field, despite a mid-event puncture.

Reigning Champion Matt Edwards and co-driver Patrick Walsh started at car one after Edwards’ 2018 success. The Welsh pair struggled with road sweeping duties early on, but despite that – diced for the overall win. However, disaster struck, as on stage three the M-Sport driver suffered two punctures on the rough, demanding stages. Struggling on, the duo attempted to nurse the car on the road section back to service but in the process were in breach of the regulations and thus were struck from the overall results. Josh McErlean and Keaton Williams took their first Junior BRC win last time out in West Cork and came to the Pirelli International Rally full of confidence. The Pirelli-backed Peugeot 208 R2 crew punched in the fastest time on the first stage and never looked back before a dominant display saw the pairing stretch a 53 second rally win and, in the process, scooped £2,500 from Peugeot UK and Total.

2017 JBRC rally winners William Creighton and Liam Regan retuned to podium in their Peugeot 208 R2. They slid into a bridge on stage three and despite losing time, the Northern Irish crew pushed on to finish second overall – aiding their championship aspirations.

Finlay Retson and Richard Crozier having been gathering pace round-after-round and were in the podium hunt right from the off. Retson entered into a final stage dual with Jordan Hone and Aileen Kelly, with both crews keen to give the brand-new Ford Fiesta R2T its maiden podium. With an inspired drive the Scottish crew got the better of their Irish rivals by just 0.7 seconds as they completed the third step on the podium – their first in the BRC together and in the sixth different crew to spray champagne this season.

With half the season complete, the BRC will return to action on the Renties Ypres Rally after the summer break on the 28-29 June. BRC Championship points after round 3/6