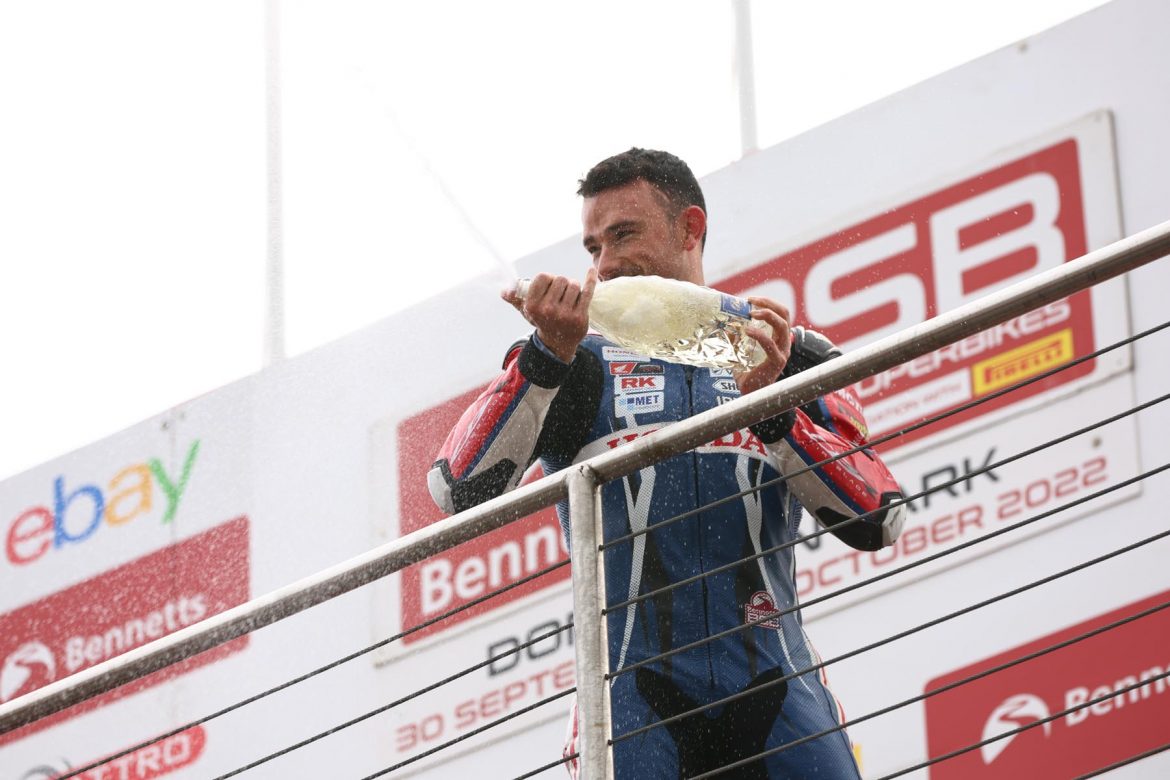 NI rider Glenn Irwin and the Honda Racing UK team are leaving the penultimate round of the Bennetts British Superbike Championship at Donington Park celebrating after Glenn claimed a double podium, finishing both races in third place aboard the CBR1000RR-R Fireblade SP.

The first race of the day saw Glenn start from sixth on the grid, but it wasn’t long until he was in the group battling for fourth place. Passing his brother Andrew on the ninth lap to take third place, he remained in the podium spot for the rest of race, able to hold off the chasing pack to complete the podium.

The final race of the day was a nail-biting one for the Honda team watching the action unfold from the garage, with Glenn and current title leader Bradley Ray battling for the win. Trading places throughout the shortened 18-lap race, Glenn was leading when on the 14th lap his foot peg snapped and he dropped back to third.

Putting in a heroic effort Glenn fought hard over the remaining laps, and when Tommy Bridewell passed him taking the third-place spot, he fought back taking back the podium place and crossing the line to take an impressive second podium of the weekend. The results from today see Glenn move up to second in the overall standings, where he’s 66 points behind Bradley with the final round in just a few weeks time.

The Honda Racing UK team will now prepare for the final round of the 2022 Bennetts British Superbike Championship, which takes place at Brands Hatch on 14-15-16 October.

I would say I’m speechless about the final race, but I’m never speechless! The first race today I didn’t realise that something wasn’t turned on that should have been turned on, I think it cost us a lot and I could have been up a step. The last race we had everything working as it should, the chassis was really good and the grip that I searched for all weekend was there. It was a very enjoyable race and I felt a lot stronger on the brakes. I had some good moves with Tom [Sykes], it’s nice when you’re fighting with a former World Champion when he’s on top form as well. Also with Bradley [Ray], he’s had a mega season so far, but to be able to fight with him is an amazing feeling. The foot peg snapping off will probably be the talking point, but there’s so many positives to take from this weekend instead. Touching on the foot peg I saw L3 on my board and thought I’m still in third and my foot was at times touching the back tyre, so I had find another place to put my foot. I tried everything I could and if the front was going to fold, then it was going to fold, because I couldn’t do anything to help as my centre of gravity was so high. When Tommy [Bridewell] went by, I don’t know, I just thought to myself ‘imagine if I got a podium with one foot peg!’ My team deserved a win today, and I hope they take the third place like a win because the Fireblade was incredible!